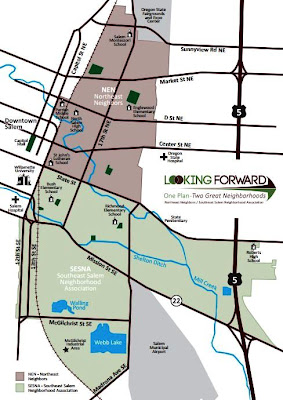 Last month folks met on the airport and Mission Street area, and the meeting notes have more on the old auto dealership site at 25th and Mission:

Unfortunately making "a destination" probably means a "a destination for people in cars" and not something fundamentally walkable or something the neighborhood might actually want or need. (Trader Joes has gone in and Panera is going both into South Salem, and REI went to Keizer Station, so it seems that "the problem" is less Salem demographics than neighborhood demographics). It'll be interesting to see how it all shakes out.

The new road is also interesting.  Is this something the City would build as a partial subsidy for development there, or is it something the development would fund and they just need the City to include it in the Transportation System Plan? The proposed road is in a bundle of amendments that'll likely make their way through the process this year.

Bits on the airport were also interesting:
All meeting notes for the project are here and the full document library is here. Looking Forward, the NEN-SESNA plan, meets Tuesday, March 11th at 6:30pm in Court Street Christian Church (1699 Court St NE).

There's nothing specifically on the SCAN agenda regarding transportation, but the Blind School property, Howard Hall, and Hospital's plans for them continue to percolate.

Additionally, over at On the Way, Bonnie Hull has a note about efforts to fix up the Church Street Bridge across Pringle Creek and Shelton Ditch. Of all the small bridges from the late 1920s and early 30s in town, and associated with Conde McCullough's style via Salem designer R.A. Furrow, this is almost certainly the outstanding example.

The recent Oregon historic bridges guide doesn't highlight it as especially notable, though, and Salemites should probably pick one of the bridges to rally around and make sure we preserve.  Bridges on Commercial over Pringle Creek and Capitol over Mill Creek were replaced with funding from the 2008 bond, the bridge on Winter over Shelton Ditch is going to get a lot of work (not sure if it's a replacement or major repair) because of 2012 flood damage, and the Liberty Street bridge opposite the new Commercial Street bridge will be on the short-list for replacement next.  These bridges will also need seismic retrofits if they are not replaced, and several of them are near the Hospital. Since the Furrow/McCullough bridges are at the end of their functional lives, we're going to be losing most of them one-by-one in the not distant future.  So let's make sure that at least one is preserved in glory!

(If we made Church Street more of a family-friendly bikeway here, and discouraged car traffic across the bridge, that would extend the life of the bridge.  Hint, hint!)

Remember the note about the crosswalk at 17th and Mill?  City Staff will be talking about a "17th Street Project" on Thursday, and I'm pretty sure the crosswalk is all or part of that.

Also on the agenda is a neighborhood resolution about the Police Station project.  I have to say, that the City has done a miserable job of defending its case! As SCV rightly points out, the Chief of Police had every opportunity in the Salem Weekly piece to prove with actual data why the Civic Center site is best, and conversely to argue why the Eugene solution isn't best, but the argument seemed to rest more on feelings than facts.  In any case, with the Boise project back on, residences there will do more to vivify the deadness of the Civic Center than a new Police Station of any size or configuration at the Civic Center could do. A Eugene-style Police Station almost certainly won't realize the savings its supporters claim, but at this point it no longer seems possible to say the City's preference is clearly best.

Finally, candidates for City Councilor in Ward 2, Sheronne Blasi and Bradd Swank will attend to introduce themselves.  Tom Andersen is also running, but is not on the agenda (he may have attended an earlier meeting).

Interestingly, at an early stage in the race, each candidate has mentioned a transportation mode and perhaps even aligned with it.  On Blasi's website she calls out Relay for Life and seems to be going for the walking and running angle.  Swank has discussed Amtrak on Facebook. Andersen bikes regularly, and his site features them on the banner at top. I think that all of them have some interest in lighter-car forms of living and urban development patterns, or at least in having a more robust menu of transportation choices available to Salemites, and this race will be interesting to watch.

Posted by Salem Breakfast on Bikes at 6:00 AM

I believe SCAN is also getting brief presentations from the Ward 2 candidates.

Thanks for the update on the former car dealership site on Mission. I'm glad to hear the owner is in discussions with the City - no matter what ends up there, it seems like access is that property's biggest liability. Hopefully the owner and the City can develop a plan that improves a problematic piece of property.

It's Tom AndersEn, SBOB. And I hear he had a previous commitment to attend a house party on Thursday evening, and will send a representative in his stead to SESNA.

Thank you! Updated with E for edits!