A Shabby, Unlucky Neighbor - That Path along South River Road

Holy Smokes!  What looks like a week of nice weather started yesterday, and that means more recreational bicycling.

The route out to Minto Park along River Road is an important one, but it's long been neglected. It's also in a problematic configuration, seemingly built to court natural hazards and to make it difficult to share with fellow humans.

Recently a reader shared their dissatisfaction with the path's condition, and the question is a good one:  What should we do about it? 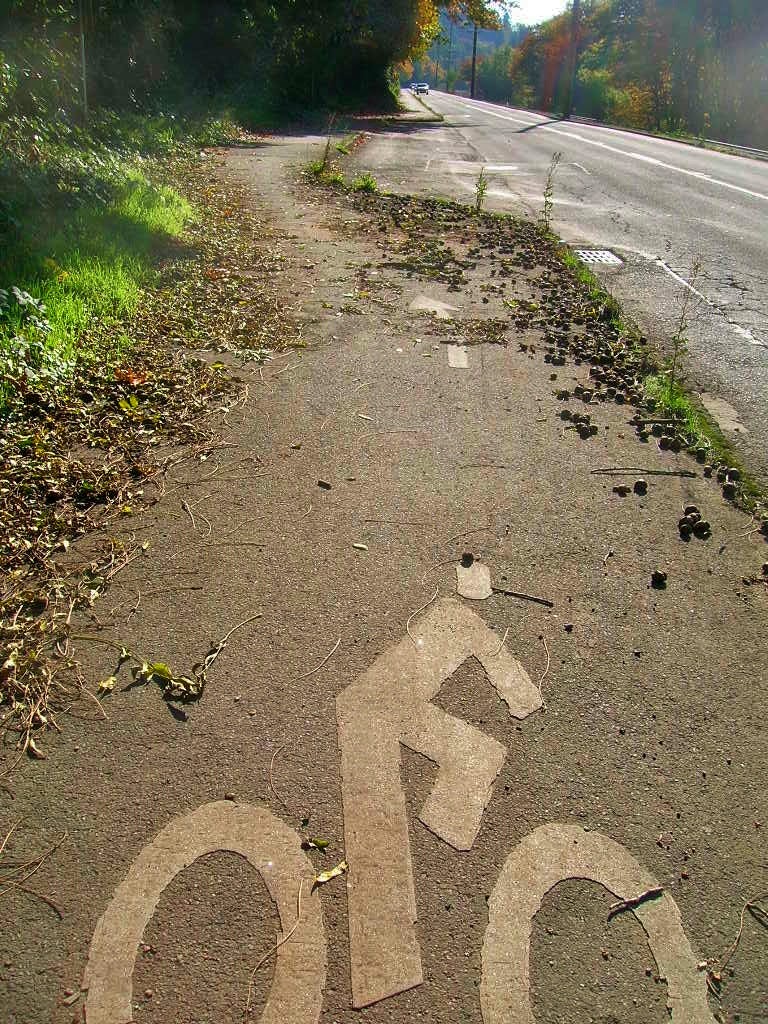 Falling from the sky, in the fall walnuts narrow the path, create too many inducements to an involuntary dismount, and conceal the already meagre paint and markings.

Reaching up in the other direction, roots heave the pavement into knots and twisted bumps, also creating inducements to involuntary dismounts. (And what about that cut-out? It looks like there used to be a bus stop or something there, but now what purpose does it serve?)

On a bigger scale and practically year-round, the earth itself here feels gravity's pull. The massive landslide in Washington got lots of people's attention, but we have our own unstable slope with a known pattern of slipping.  Three years ago it was a boulder.

A year and a half ago it was a small rock slide.


There have been more slides since then, and the fencing and barricades testify to their frequency. 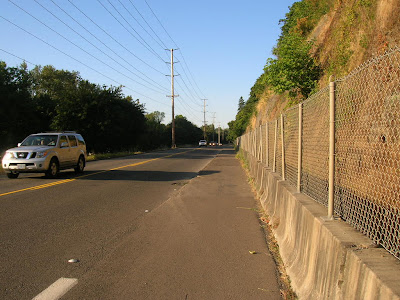 But at least for people on foot and on bike, more often it's the cars rather than the boulders that make it dicey. The fence and barricades offer no protection on that side. Passing is sometimes tricky:  People on foot sometimes try to stay side-by-side instead of single-file; equally, people on bike sometimes go too fast to take adequate notice of surface hazards or people on foot. Few want to stray too close to the speeding cars, and the effective width of the path is less than the tape measure width.

In so many ways the whole path configuration is set up against success: It's a high-maintenance system in every way.

Yes, South River Road there is a real mess. Last fall there was some talk about fixing it.  It was estimated to be a $1.3 million pavement rehab on the full roadway, including the path.  (See discussion here; it's buried in the middle of it.) It did not make the cut for funding.

I think that the political truth of it is that with the Minto bridge opening in a couple of years, and offering a superior, low-traffic connection between downtown and the park, the City is not going to make fixing this a priority.  Indeed, in Bike and Walk Salem, the recent update to the Transportation System Plan, improvements here are all assigned a second- or third-rank priority. By contrast the Minto bridge and path system is a high, first-rank priority.

For people visiting the park, this is great.  But for people who want longer rides and are willing to bike on River Road, or for those commuting from out south into downtown or points north, it's not so great.

Ultimately the road needs to be rebuilt and a sidepath or bike lane constructed on the RR side of the road. But that's a ways off and is not a simple project.

In the meantime, I think not making this a high priority is a defensible ranking, but there's still some minimal level of maintenance the City needs to continue. It could probably use some signage about slow speeds, expecting others on the path, and being aware of those walnuts and pavement heaving. Some of those root swellings and heaves probably need to be ground down again.

What you do think is the right level of attention and maintenance here? 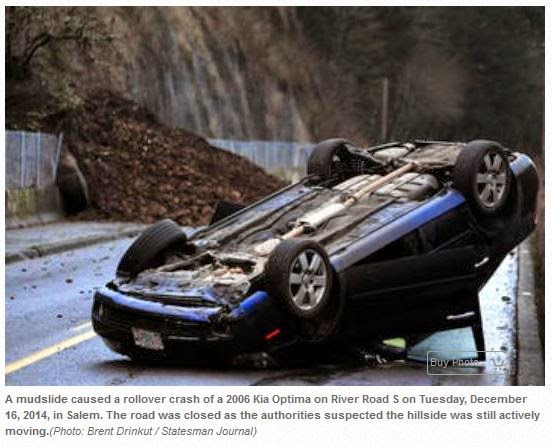 According to the news, the driver fortunately was not injured.

You raise a very good question about what should be done on that stretch of road. I've just been hoping that the bike/ped bridge will be built before I'm too old to bike on it. From where I live that will be the way to go. I rarely go to Minto unless my daughter drives and we go walking, usually if we're already out doing errands.

I'm really leery of that bike path on River Rd. South for all the reasons you mentioned. . A friend once took a small group of us over the tracks to bike on the jogging trail, but even with my hybrid, that's not good for biking especially when its muddy.

I'm also very leery of the bike lanes on Pringle Parkway (Rt 22 between 12th & downtown). The bike lanes and traffic lanes are narrow in spots. On both sides long stretches of the bike lanes have two types of pavement making a seam that I'm afraid will catch a tire. Huge trucks swoop around curves with no margin for error.

From where I live near 20th & Mill, to get to the library or south side of downtown I jury rig routes through the Willamette campus or Salem Hospital and those little parks. Sometimes I even ride on the sidewalk which I know is wrong. I rarely see anyone else using those bike lanes either.

I'm an experienced urban rider; I rode for years on the streets of Boston where the drivers are crazy and mean and shock jocks on the radio stir up driver hostility to cyclists; and there are plenty of crazy cyclists and pedestrians too - think 4 gazillion students who can't borrow daddy's car while away at school. I devised my own routes around Boston too - lots of streets I wouldn't ride on there either, but except for one block at a really bizarre intersection I hardly ever rode on the sidewalk and somehow it seems the work-arounds worked better. Maybe what gets me is that there is so-called bike infrastructure here that's pretty useless.

I was really disappointed when I found out that the Downtown Mobility Study stopped just north of Rt. 22. I guess they figured that part was already done.

updated with clip from today's slide

updated with another one