One Bridge to Rule them All? Issues and the Election

Several folks have emailed about the possibility of doing candidate interviews on transportation. I don't think that's something we'll be able to get to here, and historically it has been beyond the scope of the blog.

Fortunately the Chamber of Commerce has compiled their endorsements and candidate questionnaires, and in some ways they might do a better job than anything we could do here - while a person might draw very different conclusions about for whom to vote, the questions themselves are pretty good:
No matter what you think of the answers, these get at some of the important issues in Salem, and the style of the answers also say something about the disposition of the candidates.

So I recommend you read the Chamber's pamphlet online.

One thing that is interesting - in fact the very first impression I had since I skipped the bridge sections at first - is that as best I know, the slack from the savings in the bond is already allocated (in two sets of reallocation), but the person who wrote the question for the Chamber is under the impression that there is still a pot of savings that can be allocated for new projects. "Due to favorable economic conditions for contracting costs, the City of Salem expects to have a remaining balance in the millions of dollars." So this may say something about the Chamber's level of attention.

Most of the candidates gave general answers about how they would allocate any savings, but three of them, the Mayor (who is running unopposed) and Tom Andersen (Ward 2) and Scott Bassett (Ward 4), indicated they had followed the process closely enough to know that the City had already engaged in a public process to reallocate those savings and that at present there was not in fact more money to fund additional projects. So the answers to this question may also disclose something about some of the candidates.

Additionally, the folks over at N3B have compiled responses on the third bridge, the single-most important transportation issue in Salem.


ONLY FOUR CANDIDATES IN THE MAY ELECTIONS OPPOSE THE 3RD BRIDGE.
Because the Salem Area Chamber of Commerce printed the responses to their candidate questionnaire in their voters guide that was just released, we know where the candidates for Mayor and City Council in the May election stand on the 3rd Bridge.

Xue Lor, the other candidate in Ward 4 [ward six?], did not participate in the Chamber's endorsement process, but we know from his website that he opposes the 3rd Bridge.

They continue with some additional quotes from the Chamber pamphlet and you can read the rest at N3B.

There didn't seem to be too much else directly transportation related.  Lots of other things indirectly touch on transportation, and there's plenty of opinions to critique or affirm, and maybe you will see a pattern in some other area.

The Oregon League of Conservation Voters has also issued their endorsements here. City of Salem races are towards the bottom of the page.  I don't know if OLCV will publish their questions and candidate responses, but if they do the post may be updated. I believe there were some interesting transportation questions in it, and I would like to be able to share the answers.  Depending on other endorsement processes there might be other opportunities to update the post.

In the meantime, here are the relevant campaign Facebook pages, and candidates are occasionally posting policy comments on them in addition to the usual baby-kissing and whatnot:

(none for Mayor Peterson?) 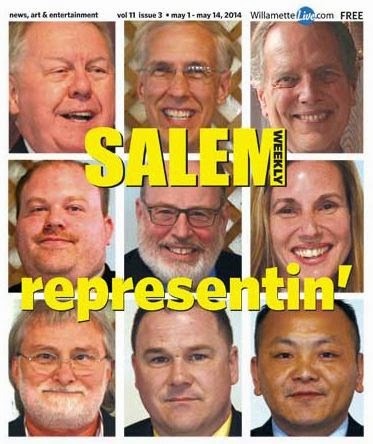 And the Statesman recommends a "shake-up" with a full slate of Chamber-endorsed candidates: 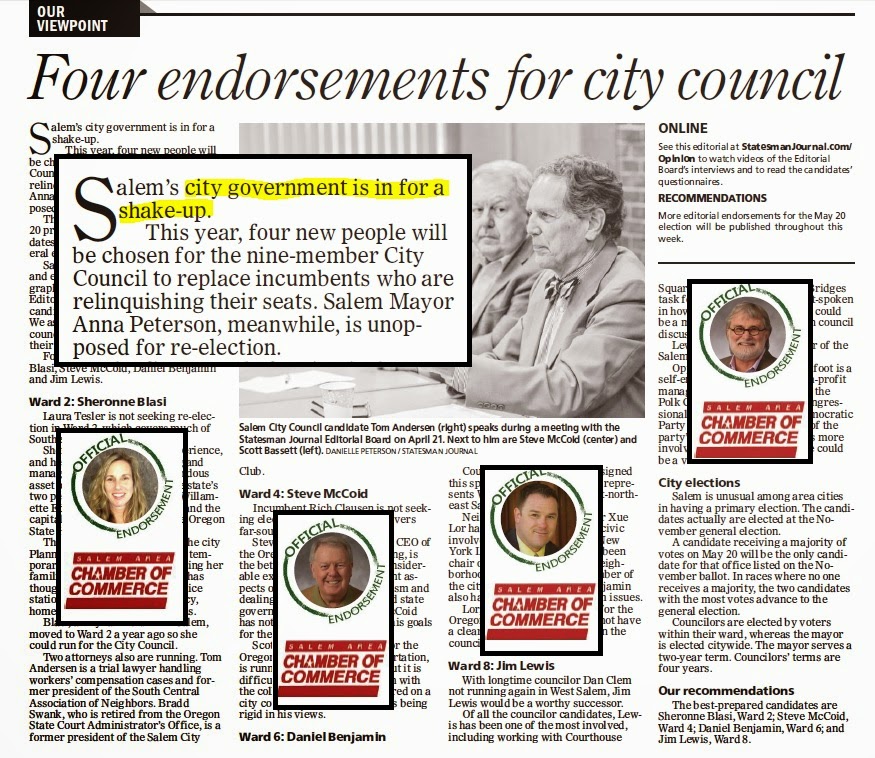 Thank you for blogging about this topic and for providing excellent links to further information. I really appreciate your efforts to educate the public about so many important issues in Salem.

Thanks for catching the typo on the N3B Facebook page regarding Xue Lor. It's fixed now.

And Xue has two Facebook pages. Here is his campaign page:

updated with endorsements from Salem Weekly and the Statesman-Journal.

I have been curious about any predictive value to Facebook. Of course people from out-of-area can "like" and any number of other self-selection biases can be in play, so who knows.

In any case, here's a count of "likes" this Sunday morning before the election:

It is interesting that McCoid, Benjamin, and Lewis all have nearly identical mailings posted to their pages (presumably from the same consultant), but Blasi does not. Perhaps her race is no longer considered competitive.

There never did seem anything very useful to say about the election this year, so other than pointing out the potential cost of free parking at the library, there were no posts.

But the facebook ecosystem remains a strange thing, and so here are the Monday "likes" before tomorrow's election:

In the last one, Tom Andersen and Steve McCoid had larger numbers and prevailed, but Daniel Benjamin and Jim Lewis also prevailed with smaller numbers.

Bennett and Kaser won with more, Ausec and Cook won with far fewer.

For the Special election in Ward 6, for which the SJ issued no endorsement:
Hoy - 222
Peterson - 367