Maybe the most interesting thing at Council on Monday is an update on the West Salem Business District Action Plan. The draft Capital Improvement Plan is much larger and also important. 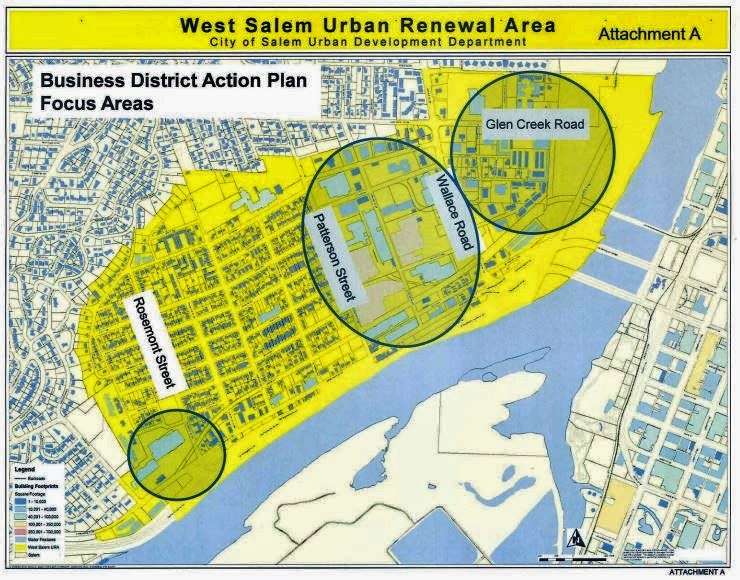 They've finally settled on the "Key Scope Elements" for the west Salem study: Looking at large-scale demolition, a new hotel, and accommodating the proposed giant bridge and highway dominate:
This project is a little squirrelly, as it seeks to bake into plans an accommodation for the giant bridge and highway. That is, it assumes what is yet to be proved, and the circularity is, well, maybe a little devious.

The bit about a hotel is also interesting.  If a hotel is needed, it seems like there's way more sense in another downtown hotel that would serve Willamette and the State offices and making it easy to get to the ballparks without a car, than in building a highly subsidized one in West Salem and trying to fill it.

And if our experiences with urban renewal have taught us anything over the decades, it's to be suspicious of projects that require large-scale demolition and clearance.

This is a study to watch closely - but since the Edgewater district is in fact very dormant, it's also possible that something genuinely useful will emerge, so being skeptical doesn't preclude pleasant surprises.  It rates a yellow for caution (we're gonna go with a highlighter theme today).

Super important, and also interesting, but not representing a whole lot of completely new information is the draft Capitol Improvement Plan for fiscal years 2014/15 to 2018/19. (Here's the city microsite with a link to a better pdf of the CIP - it's fascinating that the Council agendas usually contain links to scanned versions of the same docs rather than links to the original electronic pdfs.  Maybe this is to satisfy some legal requirement, but the second- and third-generation copies of printed-out pdfs are always inferior!)

Here's a bunch of tables and charts. At least theoretically, this is a compilation document, and shouldn't represent new things. You can see how the road bond tails off (second thought: this can't be right, since the bond savings is funding projects through like 2018, so there's something missing; will update the post once I figure it out), how the gas tax is used for maintenance and actually funds very little, how we have to plug holes in the budget for the parking garages, and the breakdown on a couple of street projects.

I think the gas tax is used to fund non-capital operations and maintenance for public works on streets, but I'll have to ask on Monday for some clarification on why it appears in one year only.

I swear the total budget for the Minto bridge and path was larger than $7.5 million.  Have to look more at this. The latest FAQ from January says $10 million.
The amounts don't line up very neatly with those from the FAQ (though I'm not sure this is a problem, per se.):
The intersection at Commercial and Union is also a key project! It's nice to see the total breakdown.
There's $3 million or so for right-of-way acquisition on Marine Drive in the road bond, but I didn't know about this "construction" component.  This is something to watch.
If you dive in, do you see anything interesting? It's a lot to take in on one sitting over the weekend.

But according to the update at Council on Monday, the Convention Center "has operated in the black from the beginning."

So how then to understand the operating losses in the P&L statements?

An accountant might be able to parse all this, but it's totally opaque for ordinary citizens!

Also: City Limits and the UGB

Speaking of opaque, the policies on annexations confound.  On the agenda is an additional staff report with responses to some citizen comments on the six policies that were on the docket earlier this month.

As a somewhat related matter, the City proposes to concur with a proposed enlargment of the Urban Growth Boundary to accomodate the recently acquired parcel that enlarged Keizer Rapids Park. 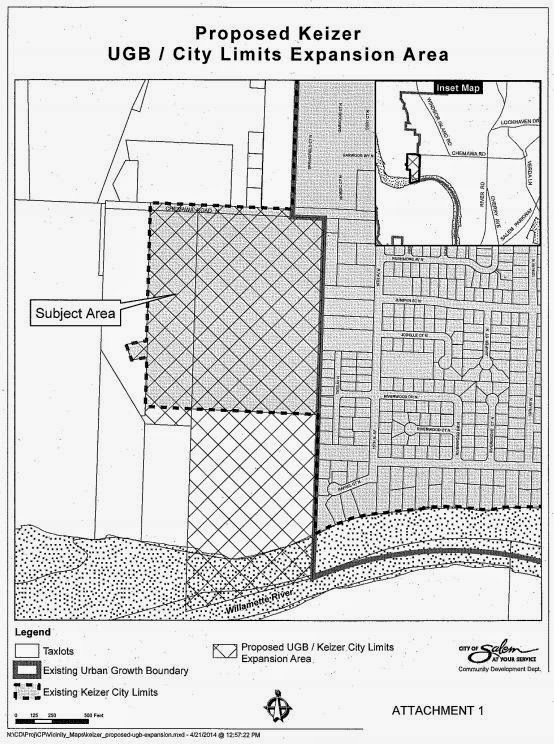 Something is strange about this.  The UGB expansion isn't for the whole park. So why would you expand the UGB for half of the park? And why is the City of Keizer enlarging city limits for only half the park. The Staff Report is blandly uninformative.

(And what would happen if the City of Salem didn't play nice and said "no" to the City of Keizer?)

Food Carts! There's a brief update on progress towards some updated ordinances for food carts.  The main problems new regulations will address:
There's an update on projects at Minto Park funded by the Floodplain Conservation Easement. A small change seems to be increasing the "maintenance" part of the allocation. Nothing really stood out as significant here, but maybe you know otherwise?

A summary update on the proposed sale and redevelopment of the North Campus of the State Hospital contains no new action, but some interesting details, including what looks like a statement about how the land is valued because it requires lots of work:


The appraisal identified the "as is" value of the property as $1.6 Million. Demolition and abatement of all buildings, except for the Dome Building, is estimated at approximately $7 Million.

The parcel is kinda like a used car that a previous insurer had totaled and now a chop shop has it for sale, isn't it? That's a real big and complicated project. Hopefully backing off and taking more time will ensure a congenial success.

Lastly, there is an information report on a 140-lot Phased Subdivision of a 27.7-Acre Site at about 2825 Brush College Road NW.  Maybe it's just a coincidence, but it looks like it might be interesting for reasons that can't be verified right now.  Maybe you will look at it and see something interesting.  If it is genuinely interesting, we'll circle back around to it later. (If not, we'll just leave this elliptical murk. For the moment, "make a note of it.")
Posted by Salem Breakfast on Bikes at 10:00 AM

SBOB, you're da man! What would we do without you? Since our local daily has given up covering the City Council except for maybe one or two issues that a 4th grader might be interested in, your coverage is the only way we citizens in Salem are able to do our civic duty and pay close attention. Thank you. Thank you. Thank you.

Re: my uncertainty on the road bond projects. I missed this in the CIP intro:

"The additional [bond savings projects] projects were adopted mid-year by Council, and funding is fully encumbered in the current budget year. Since these projects do not include a "new" funding source, they were not included in order to keep the CIP document consistent."

So the tables don't actually say anything about the road bond tailing off. It's other funding that tails off, and maybe there's a different story about transpo funding. Will have to look into that more.