On Tuesday the 22nd - the actual Earth Day - the Policy Committee for our local Metropolitan Planning Organization, the Salem Keizer Area Transportation Study, meets at noon. On the agenda is the draft Transportation Improvement Program and federal funding for 2015-2020.


The SKATS Transportation Improvement Program (TIP) authorizes the allocation of federal, state, and matching local funds for transportation activities and improvements within the SKATS area boundary during the period October 1, 2014, through September 30, 2018, (federal fiscal years FY 2015 through FY 2018)...The TIP represents a policy document for the SKATS Metropolitan Planning Organization (MPO) area describing which projects will be given funding priority....[and] represents the formal programming mechanism by which funds are committed to specific transportation projects by the affected jurisdictions in the SKATS MPO area....[in this way it serves] as the mechanism for the incremental implementation of the regional transportation and program priorities in the adopted RTSP. [italics added hopefully for clarity]

So, how 'bout that cover?  Looks pretty good!

Images on the draft Metropolitan Transportation Improvement Program and Air Quality Conformity Determination for 2015-2020 feature the proposed traffic light and intersection improvements on the approach to the Union St RR Bridge at Commercial, a bus, and an old street, Brown Road I think, without sidewalks and bike lanes, which is getting sidewalks and bike lanes.

3/6 of the images are essentially about complete streets for all users.  That's nice to see. But is it more than window dressing, a pretty cover for a less exciting book?

To bring us back to reality...here's the entry on one of the priorities:  continued funding for the Salem River Crossing "Due to growing traffic congestion." 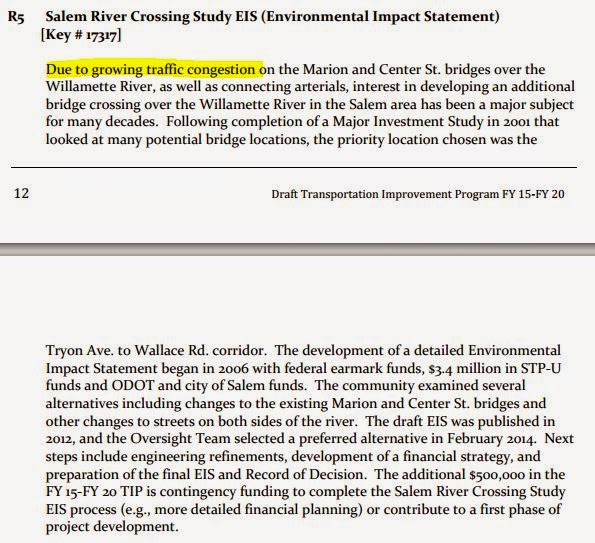 The resistance to fact is just amazing.

And of course our transportation planning still proceeds largely with a blind eye to things like this: 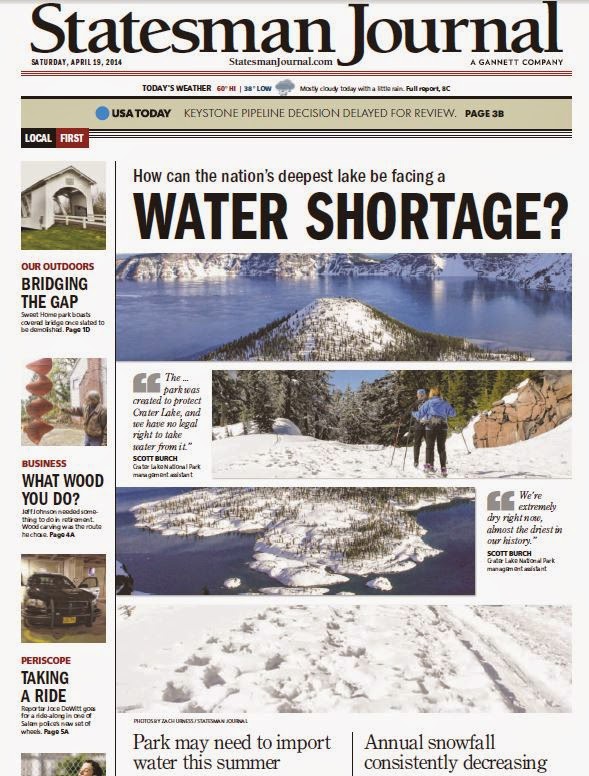 Since the 1960s, in Republican and Democratic presidencies, we've managed regulations for Carbon Monoxide - but collectively we can't seem to manage anything significant on Carbon Dioxide and the way the transportation sector contributes to it. Currently SKATS is unwilling to embrace Greenhouse Gas Scenario Planning.

So, half-full or half-empty? It's hard to say.  On the one hand, it seems quite likely that relative to other MPOs around the country, on funds that can be used with discretion and channeled by local policy, a high proportion of them are used to support things other than straight-up auto capacity. By national standards things are better than average here!

On the other hand, there's lots of room for improvement, and from the perspective here, the key is that we're still having to do mitigation to bring roads up to 1980s standards.  There's really only one new-school bike/ped project using 21st century standards. And there's a good bit of car capacity increase tucked here and there.

The chief lesson I draw is not so much about project priorities, as overall the list here probably represents "something about which reasonable people can disagree," rather than something crazy or nonsensical, but instead is about the execrable state of transportation funding generally. For being a list of projects for primarily a four year interval, the list seems paltry.

(Do you see something else that's interesting?  Or a way to reconceptualize the whole thing? Posts like this are more "thinking aloud" in an attempt to understand than they are explaining what is already understood.)

In the document itself, as an aid to thinking critically about relative priorities, it would be nice to see dollar amounts by each project description. You have to drill into some grainy spreadsheets to see how much Rideshare's allocation is relative to other projects, for example.

So here's a couple of hacked-together spreadsheets.  (If you find errors, let me know. I am not 100% confident about transcribing the dollar amounts especially.)  Farther down, some of the projects are discussed in terms of "pedestrian median equivalents," the hypothetical number of medians a project might fund if it were killed and the funds redirected.

The first sheet represents the STP-U and TAP funding in the TIP. The unallocated Surface Transportation Program and the Transportation Alternative Program offer the most flexibility and possibility for bike/ped kinds of projects. The "category" header contains my own labels, and you may have a different opinion about them, but they are the ones that seemed most useful for our purposes here.

And here are some fuller descriptions from the TIP.

Interestingly, in 2016 Rideshare will get a temporary bump in funding, nearly doubling to about $300,000 a year. (For perspective, that is equal to five pedestrian medians @ $60,000 each. Recently we have been funding Rideshare at two or three medians per year.)

There's a new picture of the proposed treatment for Union and Commercial.

It looks like the right side bike lane going south on Commercial will require the use of the bike box on Union and then during the Union crossing phase would transition to the left side bike lane. I still have questions about the north-to-south crossing on Commercial. (However, it is important to note that this is wholly secondary to the primary question of making east-west biking and walking crossings on Union.)

In the minutes for the March meeting, funding for this light was discussed:


It was noted that the amount of funding allocated to projects 4 and 6 [#4 = Union/Commercial] are dependent on whether either are funded with ConnectOregon 5 funds or if additional federal funding becomes available. There is a lot of uncertainty about the amount of federal funds SKATS may receive in the coming years. Federal funding could be reduced by approximately 30 percent. SKATS has taken the conservative approach in the development of the draft TIP based on an anticipated 30 percent cut in federal funds.

This is a little strange.  Neither the Union St. RR Bridge nor project #6 [45th street, see below] was one of the projects applying for ConnectOregon V funding.  I am a little alarmed that this could be positioning to cut this project when, as seems likely, the Highway Trust Fund goes belly-up later this summer. Anyway, the bare comment doesn't add up for the interested public, and it sure seems like there's more there.

And more on the new crossings for Wallace Road between Narcissus Court and Vick Avenue.

By comparison, the 12th Street widening project is at $2.4 million, or worth 40 pedestrian medians at $60K each.

The other day in the comments we had a spirited conversation about whether going from a two-lane to a three-lane cross section represented a capacity increase.

This project proposed for 45th Street illustrates for me the way that a project that is clearly widening gets more than a little bit of greenwash by being called a "bicycle and pedestrian improvement" project. When you look at it, what do you see?  I see the change from two cars to three cars! Isn't that a capacity increase? It would be nice to see the costs broken down in more detail on all the projects I'm calling "mitigation" so that we can see how much further we could take the funding if we didn't add the third "turn pocket" lane on many of them.

In the other sources, generally significantly more constrained than the STP-U and TAP funds, note the large $10 Million per year allocation for Cherriots.

As I have mentioned, I do not follow Cherriots closely, and so I don't understand all their funding sources or nuances.  But it is interesting to see between the two spreadsheets the different funding for Cherriots that gets passed through SKATS.  Since the overlap in SKATS and Salem River Crossing Oversight Committee is high, it is not surprising that Cherriots would be timid and averse to any perceived risk in funding or political support among peers on the committees. This could be a great part of the reason Cherriots supports the giant bridge and highway (there will be more today later this week in a note about the Cherriots board meeting).

Even though the TIP document is a draft, I'm not sure there's lots more to say about it. The moment for decisive criticism and adjustment really happens during the prior processes that feed into this document. As I understand it, this is supposed to be a mostly neutral compilation of other, non-neutral policy decisions. By the time this moment arrives, it's awfully late to propose swapping projects or changing funding.

(But if you want to know, I would:
I think the 25th and Madrona project is totally reasonable since it is about freight and frozen veggies, and not about principally about drive-alone car capacity.)

At the meeting will also be a presentation on the project for Doaks Ferry and Highway 22.  The weird sidepath running through Holman Wayside will be affected, but in advance of the meeting there were no additional materials. I also worry a little about what remains of the historic town of Eola/Cincinnati. The project description talks about using Riggs Road, which is part of the old Eola grid, and it seems likely we will lose some things here.

SKATS Policy Committee meets at noon on Tuesday the 22nd at 100 High St. SE, Suite 200 above Bar Andaluz and the former La Capitale.
Posted by Salem Breakfast on Bikes at 7:00 AM

They have a website! And a blog associated with it.

June 11th, Open House on the TIP and the Salem River Crossing