Tomorrow night there are two award and fund-raising galas, and they both highlight the values in recycling - recycling buildings in preservation, and recycling smaller stuff to keep it out of the waste stream.

They also highlight tensions between sticks or carrots, and between process or outcome. It is more important to nudge laggards, or to honor excellence? By themselves good processes don't guarantee good outcomes, but at what point do inadequate outcomes point to the need for improved or altered processes? And how do we communicate scale? A small, seemingly trivial, increment of improvement in a very large business or thing may have a much larger total impact than a tiny business that is amazingly green.

Most of these don't have clear answers. 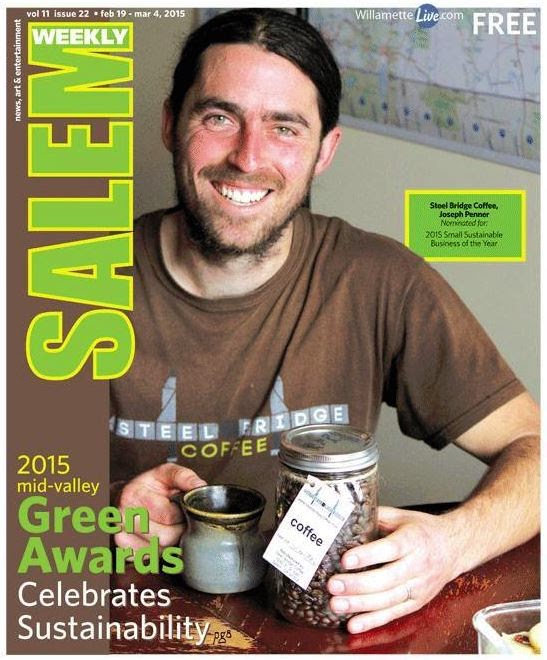 The Mid Valley Green Awards is one of the galas, and there are several great bikey businesses representing in the nominations.

You probably saw the Salem Weekly story that highlighted some of them.

Steel Bridge Coffee is one, nominated in the "Sustainable Small Business of the Year" category.

The delivery and transportation is all bike.

Unfortunately, they're in the same category - but that's a nice problem to have!

In the "Green Product/Service of the Year" category, both the Northwest Hub and Green Bike Cab are nominated.

There are plenty of other interesting area businesses in the nominations, as well.

But there's also a couple of head-scratchers in the "EarthWISE Business of the Year" category:


Nominees in this category merit this award because of their outstanding efforts in continually reducing their environmental bottom line and improving their progress on the continuum of qualifying EarthWISE criteria. EarthWISE certified businesses are committed to working toward sustainability and have documented efforts to refine their practices to protect the environment in their community. Only businesses that are EarthWISE certified prior to January 1, 2014, are eligible for nomination in this category.


It's a little funny to see the Airport along with a second nomination for South Salem Cycleworks. With all the lead and carbon pollution from the Airport, how is there any interpretation of "earth wise" that honors the efforts of South Salem Cycleworks in the same sentence as those of the Airport? Maybe the Airport has some great new processes in place for recycling, but if the whole mission of the enterprise is unsustainable and fundamentally based on carbon and other pollution - shouldn't that be a disqualification?

Here the preference looks like it is for process, not outcome.

Anyway, it's the other categories that are considerably more exciting, and fortunately there are other businesses and people who are also nominated in the more meaningful "sustainable" or "green" categories.

The awards are Saturday the 7th at the Conference Center, from 5:00 PM to 8:30 PM. Tickets are $50 and look like they are still available. (There's not a separate landing page for tickets it seems, so you'll need to navigate from the main page.)

Here are the winners!

Here are the winners:
Heritage Awards

Unfortunately at the exact same time the Willamette Heritage Center is holding their annual Heritage Awards. 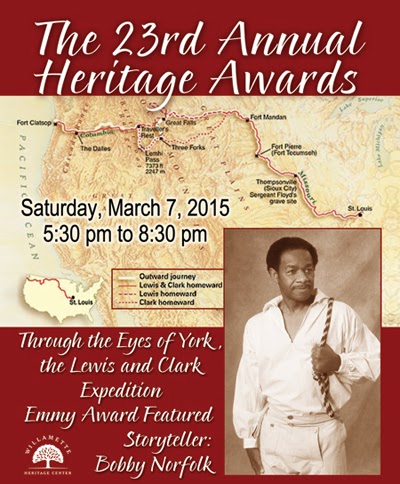 In addition to the Lewis and Clark theme, there will be six awards given out, and one of them will go to City staffer, Kimberli Fitzgerald, who manages the Historic Landmarks Commission and Salem's Historic Preservation program:


Kimberli will be receiving the George Strozut Award for #Preservation from the Willamette Heritage Center on March 7! http://t.co/wsqkLKsPXw
— Salem Planning (@Salem_Planning) February 19, 2015


In the January issue of what looks like a trade publication (even though it's for government!), The Alliance Review, a bi-monthly journal of the National Alliance of Preservation Commissions, Fitzgerald has an interesting article. 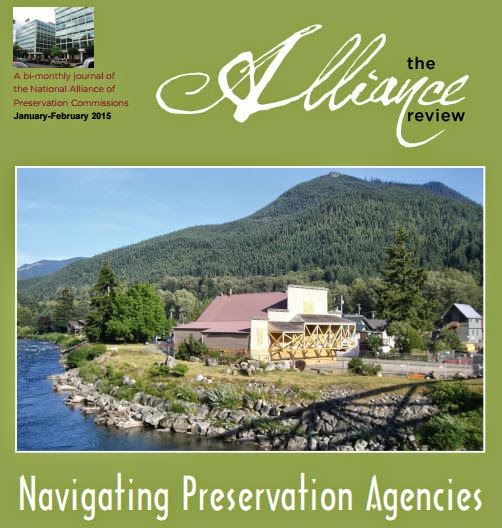 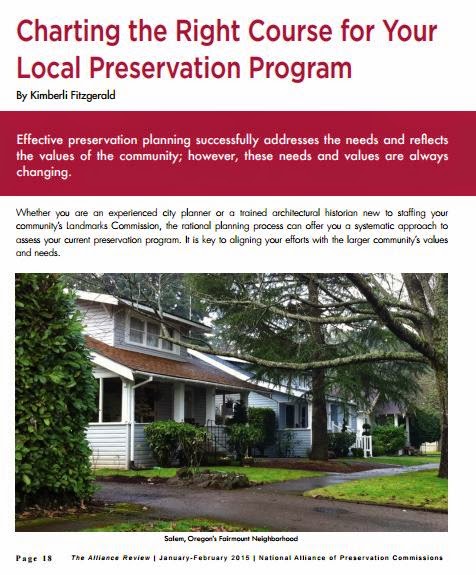 It talks about the failed attempt to list the Fairmount district on the National Register of Historic Places, and the shift in the Grant neighborhood to a much looser "heritage" designation and programming.

Without naming Howard Hall, it also seems to discuss the Blind School fiasco, though the discussion is transposed to be about houses (can you think of a situation in Salem like this that was actually about houses?):


Recently, the proposed demolition of several houses [sic] in a local district brought out very powerful feelings in the community regarding the preservation program. In this case, the HLC used our newly adopted demolition criteria for the first time and required the applicant to submit full development plans for the reuse of the site at the time of the demolition application. The criteria: “Does the proposed use have a higher benefit to the community than retaining the existing historic resource?” caused a lot of debate and disagreement. Unlike the proposed designation of the Fairmount neighborhood, where the neighbors were outraged at the thought of designation because of the perceived heavy-handedness of the city’s preservation regulations, the neighbors in this case were up in arms over the apparent lack of adequate protection for the houses that were to be demolished. While the demolition request was originally denied by the HLC, their decision was overturned by the Salem City Council and the Council’s decision to allow the demolition was upheld on appeal. In this case the process worked, even though it didn’t result in the outcome many in the community had hoped for. The question we are left to consider is whether or not the code is producing the community’s desired outcome or whether it needs to be redrafted to ensure a different outcome?

Here the emphasis is definitely on process, not on outcome.

These awards are Saturday the 7, from 5:30 pm – 8:30 pm in the Spinning Room at Mission Mill (Willamette Heritage Center).

Tickets are $45 a person, and look to be still available. (There also is no separate landing page, so event details are on the "events page.")

And here are the Heritage Award winners:

Hmmmm. It really bothers me that Ms. Fitzgerald appears to be presenting an inaccurate version of the real story of Howard Hall.

Also, don't know if there will be more to say about the seemingly cloaked Howard Hall narrative...but will update if more surfaces!