Meetings on Portland Road and the Police Station area also in the neighborhoods this week. 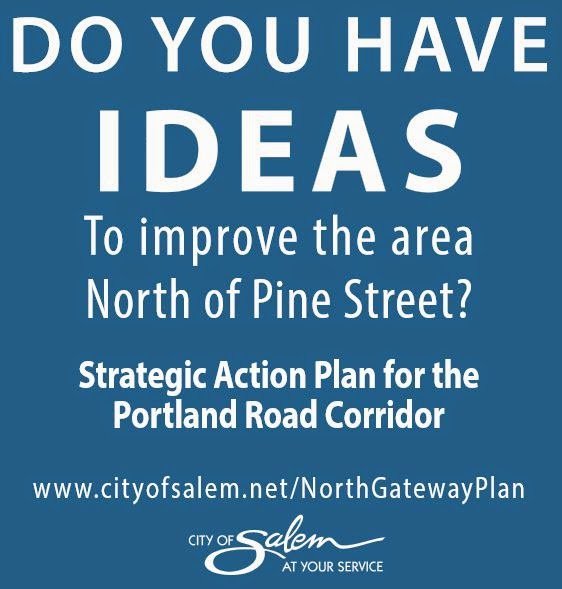 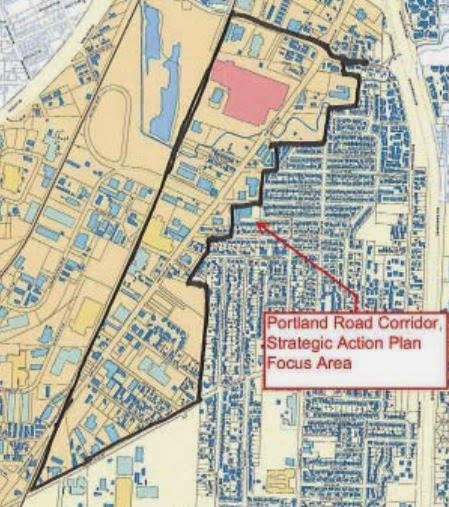 On Thursday the 12th, from 5pm to 7pm at the Salem/Keizer Coalition for Equality, 3850 Portland Rd. NE, there will be the final late winter Open House to solicit ideas and feedback on the Portland Road Corridor Strategic Action Plan.

Already the City "at your service" has poached $1 million in urban renewal funds for a stormwater project that was supposed to be funded privately by business and/or developers. After what looks like a City error in failing to bring forward the project's terms when the property was sold and changed hands, the City appears to have caved and funded it publicly.

So it remains to be seen how focused the City will be on the actual street conditions, the ways storefronts and businesses greet the street, and the way non-motorized travel is prioritized.

At least theoretically there remains a bit more than $20 million for the project, and to do it as originally envisioned is estimated at about $30 million - so this is a big value-engineering project.

On a map, Portland Road looks like an easy and direct way to the Kroc Center and to the new technical school.

On the street itself, conditions are anything but inviting and comfortable.

Let the City know they need to change this! You can also email City staff here.

While the "Blue Ribbon Committee" has been meeting since November, it hasn't been as much an inquiry and investigation as it has been the end of a sonata, a restatement of previous themes, reworked and developed somewhat, but nonetheless introducing very little in the way of truly new material. It's been just one giant "recapitulation" of he said, she said.

So there hasn't been anything new to say here.

The most interesting part was back in the fall, when folks toured the supposedly "perfect" Eugene facility. Notes from the tour describe problems with it:
Critics of the Civic Center site still point to the supposed "perfection" of the Eugene site as a model, but it sounds like it's far, far from perfect, and that there are real structural problems with the Eugene model.

From here the "Blue Ribbon Committee" has offered no additional clarity and failed to make a case for either the Civic Center site or a Eugene-model facility. It's just been bureaucratic churn.

At this point, it's still just throwing darts, but you know, Northgate has been passionate about advocating for the Epping/Rose Gardens site. So you have a neighborhood that is shouting to the Police, "pick me, pick me!" A site this far from downtown has already been ruled out - but maybe it should be revisited seriously?

It seems like spurning such neighborhood interest is a little cheeky. Why couldn't you have a smaller central precinct downtown, nearby or at the Civic Center, and have the main station where a neighborhood is pleading for it? The Epping/Rose Garden site is also on Portland Road, and it seems obvious there would be synergies with the Portland Road Action Plan.

There will be some travel inefficiency introduced by a site in the north half of town, but at least then you have located Police where people actually seem to want Police, are begging for Police. And by leveraging the Portland Road Action Plan, other "externalities" might become features rather than remain bugs.

Here are SCV notes on it (largely critical of the City's efforts).

Police Task Force chairperson, TJ Sullivan sent out two documents in preparation for the meeting tonight. One was the letter of invitation to potential members that outlined the purpose of the Task Force and the other was a summary of what the group has apparently agreed on so far. Both are enlightening.

- Council Goal for Public Safety, 2013-15
Pursue a bond measure for a new public safety facility and seismic improvements to the Civic Center.

- Task Force Discussion, Minutes: October 22, 2014, approved unanimously
Determine:
• Is a new Police Facility needed?
• How Big Does a New Facility Need To Be?
• Where Could a New Facility Be?

Motion: Recommend the City Council move forward with a design and siting of a new Police facility that supports the Police Department in their endeavor to operate to the highest standards of professionalism and effectiveness.

The new facility should incorporate all of the functions of the Police Department, the EMS [9-1-1] call center, and the Municipal Court.

- Task Force Discussion, Minutes: December 22, 2014, approved unanimously
The group appeared to agree, by consensus, with one member’s summary of the discussion: COPs [certificates of participation] do not appear to be a good use of taxpayer resources; using COPs would require cuts in services that may not be palatable to the community; and the voters will want a say in this issue.

- Task Force Discussion, Minutes: January 15, 2015, draft
Following the discussion, the Task Force was in general agreement that:
• Two bonds would be preferred (either concurrently or sequentially);
• The sites recommended for the new Police facility should not include the Civic Center site;
• The seismic cost is known but the cost of the Police facility is contingent on the site and design for that site.

Preliminary Review Draft: January 29, 2015
From the Experts
- Task Force Discussion with DLR Group, Minutes: December 2, 2014, approved unanimously
Appropriate Size, Structure
• With 150 or more [187] sworn officers and a civilian staff of more than 200, Salem would be in the “large” police department category. The next tier up are “very large” in size, such as Portland or Chicago. Once a force reaches 300 sworn officers, the discussion often turns to precincts to serve the larger sized community. For a centralized ‘large” department like Salem, with the added complexity of being in an urban environment with a
street crimes unit and other specialty units, the International Association of Chiefs of Police suggests a range of 300-700 square feet per sworn officer as a standard. The range depends on the mix of officers and service teams for a community. A 70-90,000 or 100,000 square foot facility would be in the range of what we’d expect
to see for a department of Salem’s size with its complexity of offerings.
• We’ve seen some success with “shelved space” – space that is built from day one and moved into over time.
Additions to these types of facilities are complicated by what you are adding onto (the structure) and what’s growing into them (the functions). Additions can work if they are planned very well in the very early stages.
• If you’re growing at about two percent each year, we’re talking about short-term type of growth. You’d build in space you might need in the short-term but you may not furnish it until you need it. What grows most in police departments is evidence. Evidence in the best thing suited for building expansion. However, patrol officers, who are in the building the shortest amount of time, require significant space for lockers, duty bags, and other equipment.
Design of these spaces is important for efficient work flow. Technology also drives growth. Technology is not making the spaces get smaller. Cars are packed with more equipment and the officers carry more equipment.
• We’re not advocating that it should be on one floor, just that the complexities around workflow and adjacencies are
important to consider.
• Structured parking is not less functional that surface parking.

Retrofit Existing Building for Police Use

We have retrofitted two existing buildings into police facilities recently. Both of the one-story, industrial buildings worked because they were the right kind of structures on the right kind of sites with the right kind of utilities at the right time. Both were almost entirely new buildings and certified LEED Gold when complete. One was a much bigger, a subtractive renovation, and the cost was on par with what we would expect from new essential facility construction.

Other Considerations
• Past use of facility, environmental concerns
• Urban Renewal or redevelopment potential
• Removal of property from tax rolls; property under State ownership mitigates removal of property from tax rolls
• Environmental or permitting issues (such as wetlands)
• Re-use of existing buildings (cost to bring to current standards for essential public service seismic requirements)

BTW, Police Siting Committee is a misnomer. They are definitely NOT going to select a site. They are at best going to recommend a criteria for finding a site. This point was made totally clear tonight by the Mayor.

Sorry to hear that Susann. The Mayor is leading this entire process down a dead end.