Cherriots Board Considers Standing up 4 Transit 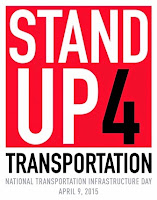 The Cherriots Board meets tomorrow, Thursday the 26th, and in many ways the most interesting item on the agenda is a resolution to participate in "Stand Up 4 Transportation" Day, April 9th.


On April 9, 2015, APTA Chair Phil Washington is asking members to coordinate and hold events and advocacy in their local communities, while Members of the U.S. Congress are in their home districts during the Spring congressional recess. The effort is intended to convince federal officials to support passage of a good surface transportation bill before the expiration of the MAP 21 extension. Its focus will be on media events and rallies and other defined actions where participants might include mayors and other state or local officials, U.S. Senators and Representatives, and coalition partners in the community.

The hashtag and motto say "transportation," but the bullets are mostly about transit:
And it goes on with many more.

So here's a great opportunity for Cherriots to "Stand Up 4 Transit."

Remember Gil and the idea of a "new vision"?

That's the spirit that should infuse and inspire Cherriots!

But instead they've rushed to embrace a half-billion dollar giant bridge and highway at the same time they've emptied service in West Salem.

Why are they so eager for Salem to spend on this? Haven't we already had our share of problems?

If Cherriots wants enthusiastic public support for expanding service to weekends and evening, how about some of that "new vision" from Cherriots?

Is the Chamber Helping or Hindering?

Let's talk about the Chamber of Commerce a moment.

Maybe Cherriots feels they can't be on the wrong side of the Chamber. With Cherriots' role in providing fundamental commuting options to employment sites, it seems like Cherriots and the Chamber ought to be allies. They should want to be on friendly terms - not wanting unnecessary friction seems like a totally reasonable aim.

But are they on friendly terms? Does the Chamber in fact view Cherriots as an important partner and ally in developing Salem's economy and civic life?

Or does the Chamber really view Cherriots as a distinctly junior, doormat partner in the relationship, a drag on the economy, a drain on the tax base, a provider of second-class transport for the proles and plebs, and something to be tolerated at best?

Back to specifics, about funding evening and weekend service, the response from the Chamber of Commerce to the idea of a payroll tax is still absent from the board agenda, so it looks like that's a something of a "trade secret." Cherriots should really publish this.

The silence suggests the Chamber strongly opposes a payroll tax, and if Cherriots thought that by supporting the bridge they would get support from the Chamber for a payroll tax - well, maybe Cherriots is a little too cozy with the Chamber, and needs more distance.

The minutes from the last meeting tend to support the conclusion that Cherriots is going to try to fund weekend and evening service by a property tax measure. They are planning on meeting with the top 25 property tax payers in the area - and it's not hard to guess what question will be on the agenda.

As an aside, one of the board members said that a large proportion of the Salem Hospital nursing staff commutes from Portland. I don't know whether this is true - the comment is just an aside - but that's a way that free parking at the Hospital indirectly subsidizes people living in other communities. We should want a civic life that makes nurses want to live closer to work, and we should want employers not to subsidize unhealthy, long commutes. (That's a topic for another day, though. In aggregate, gender's an ingredient here: Most nurses are still women, and many are generating second incomes with the man's job location probably more determinative in home location. It's a complicated stew of factors.)

In the public comment section, the elimination of bus service on D Street roused the greatest number of comments. It's not difficult to imagine that decision might need to be revisited. Even more, especially with the North Campus of the State Hospital, D Street could really be refashioned as a walk/bike/bus corridor, and it has tons of potential as boulevard maximized for human capacity, sandwiched between the autocentric corridors of Market and Center. (There's some "new vision" to be explored by both Cherriots and the City!)

Finally, former City Councilor and Council-candidate Sheronne Blasi looks to add to her portfolio of committees with an appointment to the Budget Committee.

Some of the most powerful people in Salem are car dealers after all...

From the SJ this evening, an unambiguous statement:

'“The chamber is not in support of a payroll tax, and we would actively oppose it,” said CEO Jason Brandt. “Based on the two options, we believe the operating levy is the most appropriate to go before voters.”

Brandt emphasized that the chamber supports Cherriots services, especially those planned for phase one.

“That will be a great step in the right direction and, thankfully, those changes don’t require additional taxpayer investment,” he said.

But a payroll tax would place a burden on Salem and Keizer businesses that pay taxes without imposing the same burden on nonprofits or public agencies that don’t.

“A payroll tax really does put the cost of expanded transit service on the backs of a few when transit service truly benefits the broader community,” Brandt said. “It would put a greater burden on fewer shoulders as opposed to an operating levy, which is more broad-based and more balanced.”'