Transit Center at a Cost of More than Coal; Eugene Big Winner in ConnectOregon 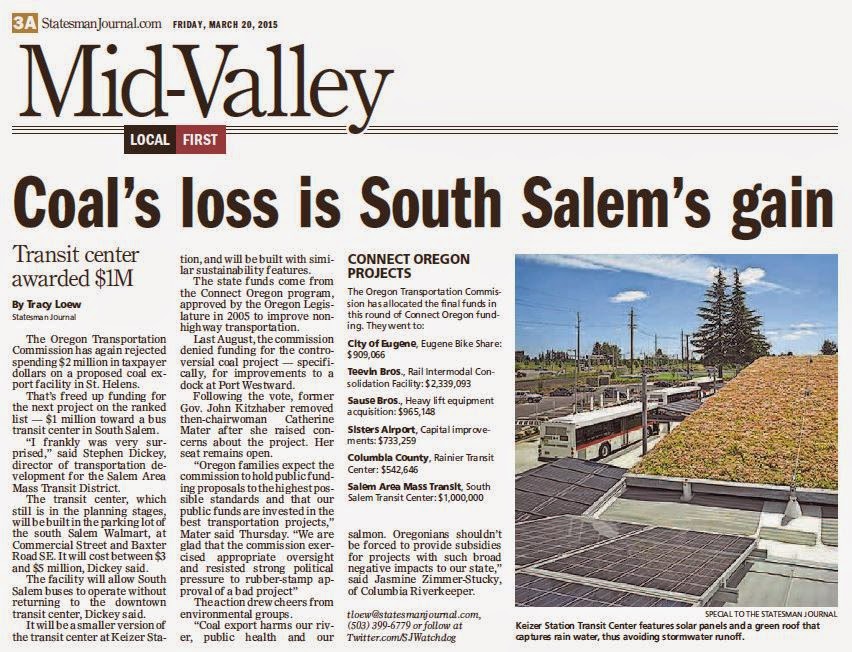 But the full story of the final round of ConnectOregon V is considerably more interesting - and more complicated.

Corvallis, not Coal, had the Relevant Loss

First off, there's the funding. It's not just about saying "no" to a coal project. Back in December the Portland Tribune reported on the project list:


Among them was the Port of St. Helens, which sought $2 million for reconstruction of Berth 2 near Clatskanie. Ambre Energy, an Australian company, proposed to match it with $3 million to rebuild the 70-year-old dock for ocean-going ships to carry coal to Asia.

But a majority of the commission had questions about the project’s readiness, and by a 3-2 vote, dropped it from the list of 37 projects recommended for $42.3 million in funding....

Since the commission acted Aug. 20, an additional $2 million in savings makes possible $4 million more for projects.

That $4 million grew, in part because a sidepath linking Albany and Corvallis also ran into trouble. The letter to the OTC from ODOT says


In a letter dated February 18, 2015, Benton County formally withdrew the Corvallis to Albany Trail project, making an additional $2 million available and bringing the total remaining from ConnectOregon V to $4.5 million. In addition, $2.45 million is available from savings realized from ConnectOregon I, II, III and IV projects. As a result, the OTC now has $6.95 million to allocate.

ODOT staff had advanced a list of projects that included the coal project - it was out, and staff the Final Review Committee tried to put it back in - and at the meeting the OTC decided against that and slotted in the transit station. In a sense the coal project did lose out - but we have to remember that it was already out!

As seemed possible earlier this month, with the deleted coal project was already supplying some of the funds, it's really the cancellation of the Albany-Corvallis bike path that is funding the extra portion that enabled the transit center, wait-listed if you will, to slide up into the funding list.

And that's a bummer. And not nearly as much of an "environmental" win as perhaps we all would like.

But wait, there are more F-words!

In a January opinion piece in the Corvallis Gazette-Times, former OTC Chair Catherine Mater, whom Kitzhaber canned just before himself getting canned*, used a strong F-word to discuss both the side path and coal projects: Fraud.


Let me be clear: The problem was not just coal, it was fraud. The submittal of fraudulent information or misrepresentation of project facts to a public entity for the purpose of securing public funds. Two ConnectOregon stories unfolded virtually at the same time after the OTC August decision — one in St. Helens, the other in Benton County — both exposing this serious problem within the ConnectOregon program....

The Port project was denied, but another project was approved at the same time; the Corvallis-to-Albany bike trail. Benton County submitted the project application to ODOT, stating the bike trail would be constructed on railroad right-of-way between the two cities. After ConnectOregon project submittal to ODOT, the County discovered the railroad would deny use of their right of way for the project, placing the County back at square one for getting the project construction ready.

The County failed to disclose this fact to the Commission at the time of their August decision, and the project was unanimously approved for $2 million in public funds-based on misrepresentation of project status.

Finally, and not an F-word is Eugene's success in this round.

You may recall that the first tranche of ConnectOregon V funded a series of bike/ped bridges for "inter-modal" connections across Amazon Creek linking Eugene's bus system and the long Fern Ridge path.

This final tranche is also going to fund a bikeshare system. (BikePortland with the envy.)

Talk about mopping the floor.

This is big, system-level bike infrastructure.

The bridges project got $2.9 million, and bikeshare $900,000. That's almost 10% of the total ConnectOregon funding in this round.

That's a big win for bikes in Eugene.

* It's a sideshow, not main show, sure, but the drama at the OTC is also part of the undoing of Kitzhaber's governorship. The optics aren't good, and something seems more than trivially dodgy. Maybe "fraud" is overreach, or maybe not. But we know that there's a good bit of transportation planning that is driven by politics and wish (and a dash of cronyism!) rather than by good sense, sound data, and careful argument.

(For more on the whole ConnectOregon V saga, see notes here. For the latest on the South Salem Transit Center, see here.)
Posted by Salem Breakfast on Bikes at 12:01 PM

Where you said "ODOT staff had advanced a list of projects that included the coal project - it was out, and staff tried to put it back in.." that is an incorrect description of what occurred. The process used for ConnectOregon included a Final Review Committee (FRC) that included the chairs of all the ACTs (area commissions) and chairs of the state modal committees. This FRC met on January 7th in Portland with the task of reviewing the ConnectOregon projects that didn't make the first cut of funding and recommending a final "200%" list of projects that included the coal project (#1 on the list for this second tranche of projects) and the south Salem transit center (#7 on the FRC list, so it was initially outside the 200% funding). ODOT staff was required to forward the FRC's recommendation to the OTC, who then made their own decision last week. It's important to know the process used and not assign responsibilities unknowingly.

Thanks for the clarification!