Fairview Addition has a House: It's a Foursquare!

Fairview Addition is less autoist and is more walkable.

The first house at Fairview Addition is going up, and you can already tell a lot about the direction for basic mobility and for the pleasures of walking in the built environment. 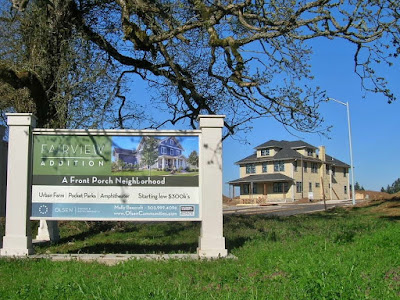 From Pringle Creek Road at the intersection with the new Strong Road, there's an old oak that looks like they're trying to preserve it as a great way to mark the corner. (Hopefully the soil scraping for the sidewalk did not go too close to the root system!)

And you can see the house in the distance.

It is a revival of a recognizable type, a "foursquare." According to the survey of housing types in the Grant Neighborhood that was completed recently, it was a customary form in Salem from about 1890 to 1915, when the Bungalow/Craftsman influence started to prevail.

This example is quite large. It is broader than typical examples from Grant, and has a third story with the dormers. (The Paulus House on Church Street has a similar mass and form, however, so it's not out of scale.)

And look at the front porch and its shorter set-back from the sidewalk and street. That's a sociable front door!

One of the design elements here and on other parts of the Fairview project is an extra-wide sidewalk, a multi-use path, on the principal roads. Below, from a year ago, you can see the MUP treatment on Lindburg Road and on New Strong Road at their intersection with Reed Road.

The treatment across different developments is not consistent. Sometimes the wider MUP is paired with a regular width sidewalk on the other side of the street, but sometimes it is not.

The MUP works well when there is little walking and biking activity, but it will be something to watch as the projects are built out, and user densities increase.

In any case, at Fairview Addition there is already a set of sidewalks also in place, and so there will be multiple choices for walking.

But there's more. The garage is in back, off of an alley. Maybe the most important feature of Fairview Addition is the reversion to early 20th century patterns of alley access. Porches and the prospects of walking address the front, and car access and storage take place in back. That's an important inversion on the values from our mid- and late-20th century autoism.

Above the garage is also some "bonus" space. I was hoping it might be a granny flat, but the plan - the "Emery" I believe - identifies it only as "bonus." (In total, not including the bonus, it has 4 bedrooms and 3 or 4 baths for 3500 square feet. It's a big house, and the side elevation shows how the garage does alter and reduce its total harmony.)

Back on Pringle Creek Road, the autoism returns with a vengeance.

The design and posting also probably means that the 85th percentile speed is somewhat higher than 40mph, so at least 15% of drivers are likely going faster than 40mph.

When a driver going 40mph or more strikes a person on foot or on bike, that person is almost certain to die.

If we want safer roads and streets, we will have to be willing to tame our roads like this.

The sun was a good reason to check in on the Minto Bridge this week.


Never take the sunshine for granted!

With trees beginning to leaf out with the young, green glow, make sure you get out to enjoy the sun this weekend.
* There's a sense in which the two developments might be competing, but on the whole it's a good thing because it gives buyers more choice and it shows the viability of the whole redevelopment concept. The total effect should be additive, not zero-sum.
Posted by Salem Breakfast on Bikes at 10:00 AM

Curiously, the Tour of Homes rendering shows a huge front yard and setback, as well as a side yard with trees, both much bigger than the actual front and side yards and setbacks.