Historian of Jay-Walking, Jay-Driving, and Autoist Triumphalism to Talk in Eugene 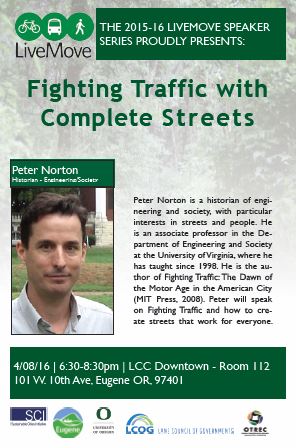 This looks like a great talk! From the email:


Motorists arrived in American city streets as intruders, and had to fight to win a rightful place there. They and their allies fought their battles in legislatures, courtrooms, newspapers’ editorial pages, engineering offices, school classrooms, and the streets themselves. Motorists who ventured into city streets in the first quarter of the twentieth century were expected to conform to the street as it was: a place chiefly for pedestrians, horse-drawn vehicles, and streetcars. But in the 1920s, motorists threw off such constraints and fought for a new kind of city street—a place chiefly for motor vehicles. With their success came a new kind of city—a city that conforms to the needs of motorists. Though most city families still did not own a car, manufacturers were confident they could make room for motor traffic in cities. The car had already cleaned up its once bloody reputation in cities, less by killing fewer people than by enlisting others to share the responsibility for the carnage.

The blurbage on the talk is brief, but it suggests the talk might be applied history - how to undo the autoist changes wrought in the 20th century.
Posted by Salem Breakfast on Bikes at 1:00 PM