I-5 Widening, Freight, Questionable Priorities: At the MPO Tuesday

Our local Metropolitan Planning Organization meets on Tuesday and they'll be formally adopting a couple of I-5 widening projects into our regional 2015-2020 plans. (Agenda and meeting packet here.)

They're not obviously "bad" projects per se, but they do show the brokenness of our process, the feebleness of our regulatory scheme, and misplacement in our current priorities. It should be easy to find better projects - but currently that's difficult.

The two:
From the FASTLANE application on the primary project:


The Oregon Department of Transportation (ODOT) wishes to complete the widening of I-5 through the Salem urban area as described in the Final EIS. I-5 is a National Highway System (NHS) route and is also on the state freight system and the National Highway Freight Network. In the area of the project, the 2-lane section of freeway carries almost 58,000 vehicles daily. Of that total, over 22% are single unit and multi-trailer trucks. Due to traffic volumes and grades in the area (5-6% in some locations) which slows large trucks, this section is subject to frequent congestion. Daily traffic in the project area is projected to grow to over 84,000 vehicles by 2040.

The proposed project includes the following elements:
The project location is illustrated on Figure 3. The estimated total cost for the project is $48,000,000. The FASTLANE grant requested is $20,000,000.

Since the funding is mostly coming from the new Federal transportation bill and comes from a set-aside for highways and freight, this is probably a "use it or lose it" situation. It's not like we could reallocate that money to a better project list. (See below for a little more detail.)

So there's a limit to the sputtering and complaining that is possible.

Nevertheless, there's probably a case for "lose it." It will not be possible to argue this in any detail here, and this will have to remain a suggestion. You may not therefore find it persuasive.

But we'd probably be better off calling a halt to major freeway widening. The benefits of widening are increasingly dubious, perhaps even bogus, and depend on faulty assumptions.

Wait! Doh! There is an obvious alternative project for highway money. A pot of money this size could do a bare-bones seismic retrofit of either the Marion or Center Street Bridges. It probably wouldn't be enough to retrofit both, or to do much enhancement or other fixing, but it would go a ways towards creating a simple "lifeline" route for critical transportation across the river in the event of a quake.

SKATS Staff send in a clarification. Some of the money could be used for a seismic retrofit, some cannot:

From the traffic modeling:

It looks like the modeling uses the old rate of 2% growth:


The segment is near its peak hour capacity and traffic volumes are increasing at the rate of two percent per annum.

The new Federal growth rate of 1.04% has not been incorporated into the analysis. So that's a problem.

There is also reason to think that the nature of freight and its place in our local economy is also changing. Modeling that projects great increase is also suspect and deserves a closer look.

A Cost-Benefit Analysis is not Useful

The project packet has a goofy cost-benefit analysis that might as well be gibberish. At the very least it is totally written to an insider audience assuming specialized knowledge and cannot be parsed in any way by an interested citizen:


A benefit-cost analysis has been prepared for the project and is summarized below. The complete report is attached to the application. The baseline analyzed is a pavement preservation project with no added capacity in the project area. The project analyzed is the addition of approximately five lane miles of general purpose lanes, an overpass and an undercrossing replacement, and complete upgrades of the segment’s safety features. This $48 million capital project (in year of expenditure dollars) has a net present value of $25.3 million and a benefit:cost ratio of 1.65 (3.15 using a three percent discount rate). The results of the analysis are summarized in Table 4 [not included here]...

I-5 is the principal highway freight route for the west coast of the United States. As a result, a large proportion of this segment’s traffic consists of commercial vehicles and intercity buses; totaling 17.5 percent at the nearest automatic traffic recorder. This percentage is likely higher in the actual project area. The segment is near its peak hour capacity and traffic volumes are increasing at the rate of two percent per annum. Before discounting, that means the value of reduced vehicle hours of delay (VHD) resulting from the project will grow rapidly. VHD is only calculated for weekdays.

While the time savings produced by the project are large for the segment, they are small in comparison to the intercity nature of the trips most common to this segment. Therefore, induced travel in terms of trips is expected to be minimal.

The value of reduced vehicle operating costs is normally noticeable for a new project. However, the project analyzed would include a preservation component that would replace planned pavement preservation activity. Therefore, reductions in vehicle operating costs resulting from improved pavement conditions resulting from the project will be zero. Finally, as this is an application for capital funds, the present value of maintenance costs (a set of operating expenses) was treated as a negative benefit rather than as another investment cost. Under either method, the effect on the benefit:cost ratio is minimal.

I have no idea what most of that actually means. Can you make any sense of it?

Because it is a summary of conclusions only, I read it as contextless factoid, bombast to satisfy a bureaucratic requirement, not anything that actually informs a citizenry. It is a pro-forma citation to support a pre-determined conclusion, not an actual argument.

The one assumption of 2% growth we already know has been abandoned by the Feds.

I have a real hard time imagining that that the project really scores so much better than a baseline "pavement preservation project." At the very least it's not proven here.

It's great that there's a cost-benefit analysis, but we are still a ways away from full implementation of "least-cost planning," it seems. At any rate, the analysis isn't anything that a non-expert, including the members of the Policy Committee themselves, could read and independently assess. It is wholly an argument from authority and offers no other evidence or value. 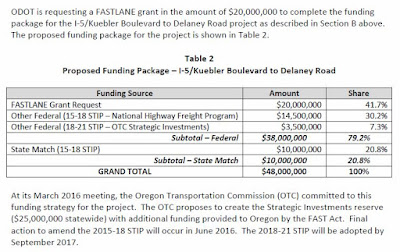 You may recall the nearly $200 million in extra funding that the OTC allocated with a very minimal public process. The "Strategic Investments reserve" and "funding strategy" here is part of that. Most of it though is for specific freight projects and can't be reallocated to, say, a protected bike lane. (Though you wonder if a funding source like this could build a protected bike lane on OR-22 through town.)

Nothing here is "wrong," but it all is a little dodgy. It's a system biased for hydraulic autoism that advantages widening and disadvantages other ways of improving mobility.

There's something of a double standard here. We invoke "freight" and like magic tens of millions of dollars for a single project glides frictionless through the process. It steamrolls critique. We invoke "bike lane" and there's a staggeringly slow process, and it is wrapped in velcro outreach to attract criticism. When we weigh projects by dollar amount, the ratio of outreach:cost is low on highway projects and high on bike projects.
Air Quality and Emissions Modeling

As of June 15, 2005, the SKATS area is not required to show conformity for HC and NOx, the precursors to ozone; and from March 2, 2009, is operating under a limited maintenance plan for Carbon Monoxide (CO), and thus not required to perform regional emissions modeling for CO.

OAR 340-252-0120 and 40 CFR 93.111: Latest Emissions Model
As of March 2, 2009, SKATS is not required to perform regional emissions modeling as part of the conformity process. Thus, no modeling was performed as part of this amendment.

If the scheme is this toothless, why even bother!

So in summary, I don't see a path to saying "we should want to kill this project." Then what? a person reasonably says. I don't see a way to offer a substitute that is immediately actionable.

More than a dubious project, I see a system and process that is broken:
It's a classic "Garbage in, Garbage out." This is a kind of SNAFU, really.

Also on the agenda is what looks like new eligibility for Federal Congestion Management and Air Quality (CMAQ) Improvement Program:


ODOT and FHWA staff recently came to agreement that both the SKATS and Central Lane (Eugene/Springfield) MPOs are eligible for a portion of the CMAQ funds that Oregon receives. Staff will describe the next steps that ODOT and the MPOs will take to consult -- over the next few months -- on the allocation of these funds.

It's all about the choices we want to make, but if we wanted to, we could use CMAQ funds for more bike/ped stuff. We don't have to use them on widening activities that operate under the guise of "congestion relief" or electric car support that operates under the "alternative fuels" heading, or new diesel engine technology for freight. We can use it for fully non-autoist congestion relief and air quality improvement. If we wanted to.

It's not clear how much funding is actually in play here, so maybe this would be only a marginal improvement in funding. More to come!

You may be aware of it already, but I just found this and thought it good to consider.

Indeed! Here's more on that report and how the DAB might consider using it downtown.

Ha, totally missed an obvious alternative candidate for highway funding. This funding should go towards a seismic retrofit of the OR-22 bridges. That's totally a discussion SKATS-PC should be having.

(Shifted a comment into the body of the text as an update. Thanks for the clarification!)

This post has got cluttered with updates, so there's a relevant update over here.

By email a reader pointed out a discrepancy in the estimated cost of phase IV of I-5 widening: $120 million v. $48 million.