A negotiated package of amendments to the proposed omnibus State transportation bill were released last week. Supposedly the votes are there for it to pass, although it has encountered some static from those who want to leverage their vote for other big legislation. (Update: It's passed both the House and Senate and is onto the Governor.)

Among transportation groups, the Street Trust is really plugging it for "record funding for cycling, walking, and public transit." Locally, it is also significant for an earmark on the Center Street Bridge.

Transit dominates the non-auto numbers and seemingly the headlines. 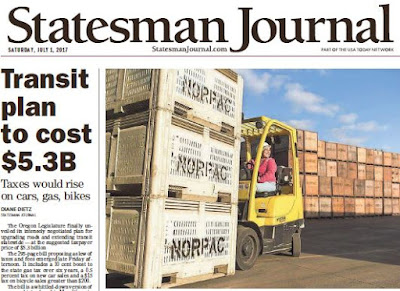 However, the transit piece is not $5 billion worth. It's not anywhere close to the majority of the funding. It's going to raise a little over $100 million a year, to be distributed statewide, and if the package is still intended for 10 years, that's 20% of the total. That appears to be how the Street Trust lands on their "$1.07 billion." Crucially the tax will be paid by employees, not employers, also. It's not the most equitable - but it's something, it's true. How far that will really go statewide is not something transit advocates have addressed directly. I worry that it won't be enough. It looks "big," but how big is it really? The Street Trust's focus on the multi-year totals statewide may not express in a meaningful way the actual effectiveness of those funding levels in a community - what is the ground-level meaning of things? What will we actually see on the street?

More directly relevant here, and even less equitable: The $15 tax on bike sales and the $750 to $2500 rebate for electric car purchasers. We should be subsidizing bike purchases, not penalizing them! Even with EVs, autoist subsidy is harmful. EVs still create congestion, still consume disproportionate road space and storage space, still employ lethal force on the roads. Bikes and bike transport meet goals in public health, greenhouse gas emissions, and fiscal efficiency. The bike tax vs EV subsidy is just completely wrong-headed and a way to "stick it" to people who bike because they are perceived wrongly to have "no skin in the game." This policy element is bass-awkwards. If EVs deserve rebates, bikes and bicycling deserve them doubly.

Still, the most important element for here is something else.

Earmarks are back in the bill, and Region 2, our region, will get just over $200 million. One of the projects specifically called out for part of that sum is:
That's huge!

Back in 2014, not even five years ago, except among bridge critics there was very little connection made between our Center and Marion Street bridges and the problem of seismic retrofits. There were two parallel and independent conversations going on, one about the Salem River Crossing, the other about the big earthquake, and the connections between them mostly not made.


So in the space of five years, we've seen a major shift in priorities. Not a complete one, away from the folly of the Third Bridge itself, but at least a reordering of priorities and the seeing of connections, with the seismic retrofit slipping in rightly on top.

That's a real accomplishment for N3B, for the citizenry in general, and for Electeds like Councilor Andersen who have advocated for the seismic retrofit! This is a big deal that shouldn't get lost in the details or lost in the big picture.

Back to the bill, here's some of the material:
As reactions continue to come out, we'll update this list (some of these are from last week).
The SJ highlights some principled criticism by Republicans. (Though, of course, it's not clear what they would propose as a substitute.)

And now that the bill has passed both houses and the Governor has indicated she will sign it, some final thoughts:
Here's the breakdown for Senator Winter's District (Sen. Courtney's is essentially identical).

Every chart of active transportation funding that doesn't include the context of total funding undermines our voice.

That P4B post is great. Thanks for pointing it out.

Wow! 9.2 million for Cherriots! Wonder what that will get us. They estimated 5 million a year for weekend and evening service...