The Cherriots Board meets on Thursday and they look to adopt replacement routes for the Connector, the on-demand "flexible transit" project in West Salem that did not thrive. (Full agenda and meeting packet here.)

Some of the details are different. There are a few new zigs and zags on the routes, added in response to user requests.

Only 173 people completed the survey that generated those user requests. That's an unfortunate commentary on the intense autoism in West Salem. Transit at the moment is niche mobility more than anything central and fundamental.

Of the comments that were not acted on, "greater frequency" was by far the most popular.

Given a fiscally constrained budget, the only way to add more service to these routes would be to reduce coverage. Since maintaining coverage is one of the key goals of this service change, staff decided to keep frequency on the proposed routes as planned.

The Park and Ride on Wallace will also remain mostly orphaned.


A number of respondents requested staff maintain service to Wallace Road Park and Ride. Staff considered bringing Route 16 directly into Wallace Road Park and Ride as is done today. However, service on Riverbend and Wintergreen would have to be removed to make this happen. This would reduce coverage for a large area of West Salem. Although we plan to no longer bring Route 16 directly into the park and ride, riders will still be able to park at the park and ride and walk to the reestablished bus stop at Brush College @ Wintergreen (0.15 miles away).

There are some other comments and staff response in the full packet if you are interested. (Unfortunately, the plan itself is not published separately and is only in the full meeting packet.)

Unless there's a major hiccup, the plan will be implemented January 2nd, 2018.

Also in the packet, a summary of the Annual Performance Report is interesting. You might have seen on facebook a note that Cherriots "saw a 5.7% local ridership increase in July, marking five months of increases in a row." Zooming out a bit, ridership still remains a little depressed:


Average daily boardings are down 1.0%. This is considerably less than the 11.4% drop experienced between FY15 and FY16.

A chart from the fourth quarter report presented last month is clearer on the state of things. The grey line for 2015 is much higher than the two blue lines for 2016 and 2017 - though the most recent months of 2017 do clearly show that monthly increase over 2016. 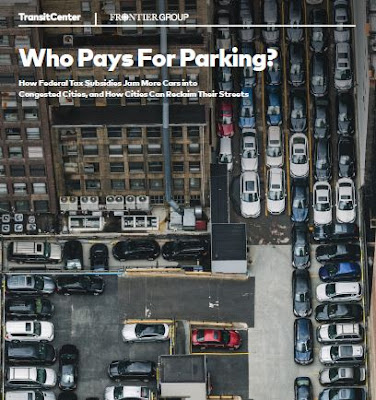 There are multiple factors in the decline - cheap gas is high among them. Just as Cherriots is thinking about all this, the City's transit committee will need to think about not just ways to make transit more attractive to Salemites, but will need to think about all the ways we subsidize and support in actual policy a preference for drive-alone trips.

Coming to grips with our mania for copious free and subsidized parking will need to be at the center of it. This will involve multiple levels of government. The Feds also subsidize autoism.

Transit Center just released a paper that zeros in on one part of this, "Who Pays For Parking? How Federal Tax Subsidies Jam More Cars into Congested Cities, and How Cities Can Reclaim Their Streets."


The United States currently spends approximately $7.3 billion per year to encourage people to drive to work through the federal income tax exclusion for employer-provided and employer-paid commuter parking. The “commuter parking benefit” puts more cars on the road in our most congested cities at the most congested times of day—exactly the opposite of what most cities want or need.

In an effort to counteract the effects of the commuter parking benefit, America also subsidizes people not to drive to work through the “commuter transit benefit”—a $1.3 billion program that enables workers to receive transit passes or vanpool services from their employers tax-free. The transit benefit attempts to support transportation policy goals, but it is overshadowed by the parking tax benefit’s much larger adverse impact.

America’s tax policy for subsidizing commuter travel is inefficient, inequitable, and lacks a coherent policy purpose. This report proposes a series of reforms to improve and modernize the tax treatment of commuter benefits—saving taxpayer funds, improving the quality of workers’ commutes, and making our cities better places to live and work.

Right now most of our talk about congestion and transit involves carrots. But these are carrots only on the walk/bike/bus side, and will not themselves be sufficient if the carrots for autoism, like the commuter parking benefit, are not modified or removed. We also need to address the carrots, deep structural systemic carrots, that operate to promote autoism and congestion, and to realign those carrots with our actual policy goals. There is systemic disconnect and incoherence right now!

And again, we have policy language for this. We just have to take it seriously rather than giving it a wink and nod as we are prone to do.

The annual report has largely settled into boilerplate repetition: For a few years now the 3x3 block downtown core has been at or above 85% full and the garages have been around 50% full. The recommendation is "same as 2016":


The retail core on-street system continues to exceed the 85% occupancy threshold (industry standard) during the peak hour. This results in a deficiency of available parking. Best practices would suggest moving to more aggressive management – shorter time stays, more rigorous enforcement, or priced parking. However, based on the findings from this study Salem has a well calibrated system (appropriate time stays) with sufficient enforcement (no additional rigor is required). As such, the city should consider moving to a paid on-street system, both in the retail core to bring occupancies at or below the optimal 85% threshold, and throughout the entire Parking District to counter balance implementation in the core and to disburse utilization throughout the whole Parking District (as it is today).

A better parking policy is one of the most important things the City could do to support Cherriots.

Absent direct decongestion pricing, priced parking would also be one of the most effective measures in reducing congestion on the bridges.

There are many reasons to reconsider a commitment to plentiful "free" parking. And unlike a lot of things around transit, the City has control of this one.
Posted by Salem Breakfast on Bikes at 12:01 PM