Council meets on Monday and they will consider an intergovernmental agreement on the Center Street Bridge Seismic Retrofit.


An Intergovernmental Agreement has been prepared to identify the roles and responsibilities for the seismic upgrade study. Highlights of the agreement are as follows:
Additionally, the State of Oregon recently received Legislative approval through the Transportation Funding Package for an estimated $60 million dollars to complete seismic upgrades to the Center Street Bridge. The City will continue to coordinate with ODOT after the seismic upgrade study is complete to facilitate the design and construction of the final improvements.

The proposed IGA is limited, however, and Council may want to consider holding off a little and expanding it.

The plan right now does not appear to give sufficient consideration to movement, to mobility, beyond the structural engineering necessary to make the structure survive a quake. After a quake, presumably the Marion Street Bridge will be toast, and two-way functioning across the remaining bridge will be necessary, at least until the Marion Bridge is repaired or replaced. This is, then, both an immediate problem after quake, and a medium-term one in the aftermath. So there's a case that the formal Plan for Seismic Retrofit should embrace both structural engineering and traffic engineering.

Though we have heard very little about it, there is apparently an emergency plan for two-way traffic. This should be dusted off and expanded. 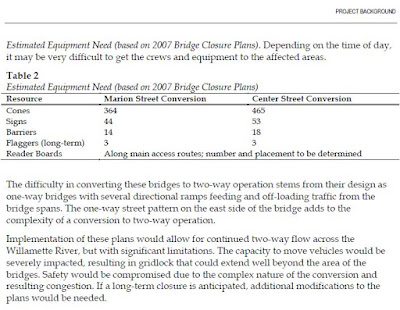 The discarded Two-way Alternative from the DEIS should also be dusted off and analyzed in more detail, retrieving parts of it as seem useful. Here are some previous notes on two-way functioning, both temporary, and longer-term:
In order for the seismic retrofit to be most functional, minimally functional even, we should also have a traffic plan. An ancillary benefit of a two-way traffic analysis and plan will be expanding the universe of ideas for reducing congestion across the river, some of which should be formalized as part of the suite of actions we use instead of building a new giant bridge and highway.

By not considering this, we reinforce the current tendency for a new giant bridge and highway. The tendency of everything in the SRC process so far has been to enforce a path-dependency on a new bridge. In doing so we have deliberately neglected less costly options.

We have so many bridges we need to reinforce yet that it remains essentially absurd to talk about a new giant bridge and highway.

It's also important to make sure ODOT is fully committed to the project. In public comments from July, ODOT seemingly undermined prospects for and confidence in the project. (If ODOT is going to embrace a skeptical approach to things, it would actually be helpful for ODOT to redirect skepticism like this to the SRC, which has many any number of dubious assertions.)

Panasonic Solar to Shut Down and Mill Creek Corporate Center

Not itself on the agenda, but surely big news, is a factory closure. Back in 2013 Sanyo Solar laid off about a third of its work force. In 2016 another third. And a few days ago Panasonic announced they were shutting the whole thing down. Apparently they met the bare minumun to be in compliance with the $42 million on incentives and subsidies that had been the lure to attract them in the first place. So it will be a good time to perform another "review of incentives."

Curiously, the paper hasn't reported on the closure. (The Oregonian reported on it a few days ago.)

That again, is not on the agenda.

The general business park area is on Council agenda, however. The City still thinks the Mill Creek Corporate Center is the bees knees.


In order to accommodate potential new development within the Mill Creek Corporate Center on sites C, E, and F (Attachment 1), the following projects from the master project list are being recommended for completion in FY 2017-18. According to the IGA, these projects are to be funded with Development District fees.


The recent Amazon thing sounds great, but the Sanyo/Panasonic clusure should prompt more skepticism: Why are we subsidizing it when the robots are going to be replacing the humans in not very long at all?

The Mill Creek center is shiny and new, but it remains far from clear how it actually functions in the context of a sustainable approach to corporate subsidy, city growth, and municipal finance. The sewer project may be funded out of Development District Fees - more or less a system development charge - but the road building, Kuebler and I-5 expansion, and other infrastructure are not paid for out of the Development District, and instead are indirect subsidies.

The Sanyo/Panasonic closure shows the ephemerality of the businesses we too often choose to subsidize.