The Policy Committee for our Metropolitan Planning Organization meets tomorrow, and the topics are mostly pretty wonky. But they seem worth some passing mention. There's also what may be the first public glance at the schedule for the Commercial Street Bridge retrofit.

Today Salem City Council is looking at three projects to pitch SKATS for Federal funding in 2019-2021. The announcement was public, there is opportunity at Council for Public Comment, and then those project applications will undergo more vetting and opportunity for Public Comment at SKATS.

So from a bureaucratic standpoint centered on following process, there looks to be a robust procedure for public involvement here.

But if you asked members of "the public" how many would say that they felt like there was real public participation in this process?

Probably not very many.

And it is true that a "tier 3" sidewalk project got bumped up to "do it now," and that this leap-frogging is a little mysterious.

(Part of the matter is that SKATS mainly compiles and does not originate projects, and so many problems in public process will stem from the ways that the member governments themselves conduct public process.)

Even more, there is a vast body of substantive criticism on the Salem River Crossing, and yet that process has continued barely impeded, impervious and insensate to critique and adjustment.

So how meaningful is it to talk about "public participation" in this context? Several of the MPO processes seem autonomous, governed by their own internal logic and reasons, and deliberately isolated from real, authentic public process. 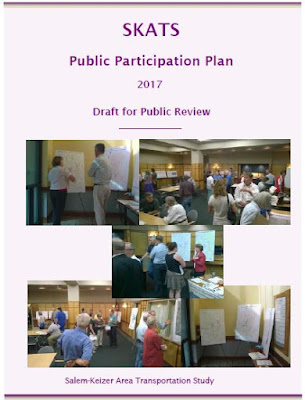 It had been scheduled for release earlier in the year, but comment during an earlier round of revision prompted further revision. Some of the changes in the latest draft look to be good partial steps, however. 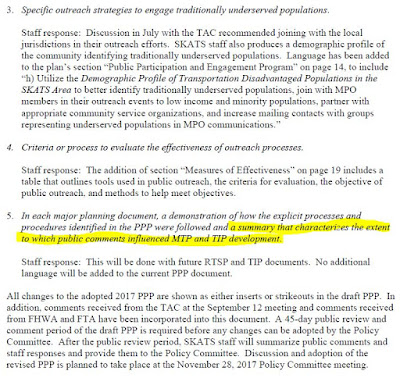 There will be more attention on "outreach events to low income and minority populations [and] appropriate community service organizations."

This still may conform too much to a top-down model: "Here's a list of projects and a translation for you - do you have any comments on the projects (which we're probably going to do anyway)?"

The part that seems most interesting from here is a little bit of self-assessment: "a summary that characterizes the extent to which public comments influenced MTP and TIP development."

At least then we might be able to see more on why public comment in favor of greenhouse gas assessment or against the Salem River Crossing are largely ignored or discounted. I would like to see more explicit discussion of which public comments are deemed worth action, and which seem worth ignoring or discounting. Sometimes members of the public are simply wrong or misinformed, but sometimes they have seemed to have good information and substantive comment, and it would be good to see formal response grappling more with that.

And what happened with the seismic retrofit? Seriously. That seemed like such a remote possibility just a few years ago. How did that come together so quickly? Surely there was back-room dealing involved, but that also looks like a substantial win for public comment. What was effective about that particular process? (More of that, please!)

On the whole the new draft plan seems like it will show some positive incremental steps, even if there's still too much "public participation theater" in our official Public Processes at all levels of government.

SKATS looks to release the public draft tomorrow, to accept public comment (on a document about public comment - that's meta for you!), and then formally adopt it at the November 28th meeting. 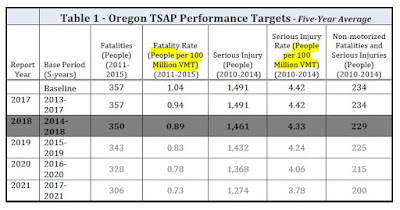 We're very close to adopting some safety targets. From the memo:

ODOT was required to establish specific numeric statewide targets for each of the five safety performance measures by August 31, 2017 for calendar year 2018, and will be required to report them annually hereafter. ODOT developed targets in the 2016 Oregon Transportation Safety Action Plan (TSAP), which are summarized in Table 1. The targets listed in Table 1 for the 2018 report year were submitted to FHWA as their Highway Safety Improvement Program (HSIP) targets. The targets that were preliminarily set for 2019 and beyond may be revised based on actual data before they are submitted for subsequent year targets.

The MPO will consider whether to support ODOT's targets and use them formally here.

This has been going on for a while now (early note here), and mostly it was really in the weeds. The details did not seem all that important. The real question has always been, if we don't meet these safety targets, what are we going to do? The nature of the targets themselves seemed almost secondary, even if the bulk of the administrative energy was spent debating and deliberating on them.

As we continue to kill people on our roads, what exactly are we going to do about it?

So the metric didn't seem as important.

But maybe the metric will be important. The proposal is to adopt the State's targets rather than adopting a different set and process for the MPO. Why re-invent the wheel, right?

But the State's target involves a ratio that may hinder action. Or at least it encapsulates great autoist bias.

Two of the targets are defined as "people per 100 million vehicle miles traveled." As a rate this is problematic.

If VMT increases, it would be possible to have a declining rate of harm/100 million VMT while the absolute count of harm increases. To exaggerate the math: If we travel 200 miles instead of 100, and our rate declines to 0.75 from 1.0, we go to 1.5 harms from 1 harm.

Similarly, if VMT decreases, it would be possible to have an increasing rate of harm/100 million VMT while the absolute count of harm decreases. If we travel 50 miles instead of 100, and our rate increases to 1.5 from 1.0, we go to 0.75 harms from 1 harm.

A central claim here has been that if we are serious about wanting fewer people killed on our roadways, the fastest and best way to decrease serious harm and death is to make fewer driving trips and to make shorter driving trips. To make it easy for people not to drive.

That is more effective than doing the same amount (or more) of driving and just trying to "drive better." We are humans, after all. It's easier to not engage in a dangerous activity at all than to try to squeeze out little increments of safety while still doing the dangerous thing. "Eliminating the hazard" is a regular approach to occupational safety.

ODOT and maybe the Feds also are trying to drape these safety targets in a mantle of something like Vision Zero, but they don't get us there.

Maybe the fact that there will be more reporting will create a more general level of attention to death on our roadways, but the actual targets themselves don't look to be constructed in such a way as to prompt real and systemic change. They look like things designed to prompt tinkering on the edges and inexpensive, symbolic action.

In an update on HB 2017, the omnibus transportation bill, there's the outline of a schedule on the Center Street Bridge. While the seismic retrofit assessment and plan is scheduled for the next year or two, detailed design is not funded or expected until 2022, with funds for construction programmed at the moment in 2025.

So we're still basically looking at a decade out.

That's a little disappointing given how absolutely critical is the project. At the same time, this could yield more maneuvering space for thinking about two-way functioning, both temporary and more medium-term, on the bridge.

SKATS Policy Committee meets Tuesday the 26th, at noon. SKATS is at 100 High St. SE, Suite 200, above Andaluz Kitchen and Table Five 08.
Posted by Salem Breakfast on Bikes at 12:30 PM

Every time I mention SKATS on Facebook, people ask me what that is and what do they do. When I mention it in discussion about Salem River Crossing, no one seems to know who they are.

I served on the SKATS CAC back about 20 years ago representing the Salem-Keizer School District. I got the assignment because no one knew what they do or wanted the job. I had some knowledge because I was involved with the neighborhood associations.

When it comes to public participation, it is a joke. They are just playing games. I learned that first-hand when I tried to get them to make presentations to neighborhood associations or community groups. They made no effort to let them know about such presentations even though they did put it in the Plan. Not sure it is there anymore.

A few years ago I asked for someone to come to my NA and was told, we don't do that anymore, but we can send you a copy of our overview. It arrived 3 days after the meeting even though I asked 10 days in advance.

I would be interested in knowing how to get some sort of change to happen. Asking does not seem to be enough.