Let's Talk Demand Rather than Supply

The most stubborn fact in our current moment of debate over the Salem River Crossing, and the one that makes it most difficult for those of us who think the SRC would be more harmful than helpful, is that traffic is up by a considerable bit in the last two or three years.

In the decade of the 2000s, extending to about 2013, traffic flattened and it was easier to make an argument against the bridge based on demand. Demand was flat, there were at the time reasons to think about structural changes in miles traveled and trips taken, changes that are now more difficult to assert, and so it was possible to make a credible argument that based on demand "we don't need it." We don't need to add to road supply to relieve congestion and accommodate drive-alone trip demand.

There was a real opportunity to focus on the demand side of things.

But now, based more on the subjective and unpleasant experience of being stuck in traffic, with this increase in bridge crossings, with a change in demand, people increasingly find "we don't need it" an incredible claim, not very plausible at all. Now the focus is on the supply side of things. (There is in fact a whole facebook group devoted to congestion - indeed, almost perversely celebrating congestion - as if that by itself constituted proof we need a new bridge and highway.)

So does this nullify this part of an argument against this SRC or does it merely require that opponents of the SRC adjust and refine their arguments?

Separately, on the State Street Study, the current preferred alternative is a half-and-half beast, half road diet, half status quo. It arrived at that solution in no small part because the dominant question to be answered was, What will be the future car traffic demand and how can we accommodate it while maintaining level of service? How do we need to adjust road space supply to meet demand?

On both the SRC and on State Street, the dominant analytic mode has been concerned with satisfying some future projection of demand for driving trips. We propose to add road supply - expensive road supply! - to satisfy future demand.

We treat demand and rising traffic counts like the tide, like an inexorable force rising upward or outward, something that must be relieved or drained. It's another expression of hydraulic autoism.

More generally we do not ask, Is that traffic demand a good thing? And, if not, can we reallocate demand and better utilize existing supply? Can we move people by means of mobility other than drive-alone trips? Are we truly locked in to this paradigm of drive-alone trips and traffic as fixed quantity of fluid?

It's just fascinating that in any number of areas in life we do not hesitate to say we must moderate our appetites and adjust our demand to a fixed supply. In these areas we see that demand is more easily adjusted than supply. We accept supply as an inflexible constraint.

But with cars and roads the default and norm is that demand is inflexible and that we must adjust our supply to accommodate appetite and demand, however costly is the move to increase supply. (But indeed it's inflexible only at morning and evening rush hours. We mostly ignore the time-dimension here.)

Why is that? We humans are so creative about so many things, and yet we aren't able to act at all creatively about altering our patterns of demand, obsessing instead about adding supply.

I keep posting this slide from the Comprehensive Plan because it seems self-evident that there is high-level policy language that supports talking more - and actually doing stuff! - about demand instead of increasing supply.

But for a variety of reasons it has not seemed politically feasible to take this language very seriously; instead, in very official, earnest, and sober bureaucratic prose and speech we wink and nod ironically at it. We spend more effort on meeting autoist levels of service for 2035 and 2040 than on reducing reliance on the SOV. We obfuscate instead of clarify, and punt the task to another generation. We do the very minimum the laws require instead of trying for the maximum, or even just something more enduring and substantial than the bare minimum.

It's important to say also that we had a window in the 2000s during which we might have done more. With traffic counts flat during that period, the political task of focusing on demand instead of supply would have been easier. We really blew that opportunity, and now it will be more difficult.

It looks like one big project to come out of the Strategic Planning effort will be to revisit and thoroughly revise the Comprehensive Plan. Even though our policy language heads off in a different direction, professing to value "alternative modes" and "decreasing reliance on the SOV," our de facto policy is to prioritize drive-alone trips and automobile levels of service, and to fit in "alternative modes" as secondary considerations, mainly when it is convenient for greenwashing, branding, or other signalling. They are signs, not act; alternative, never primary. If we are not going to be serious about reducing drive-alone trips, let's bring our policy language in line with our actual practices. Let's stop the charade.

Previously:
And for a much deeper dive on the SRC in particular and the way it has systematically disparaged analysis of demand and focused on increasing supply:
* And this is a separate topic, maybe we'll come back to it again, but there is no "the bike community." People who bike are far from a monolith and have many different interests and aims other than riding bikes. Many who bike recreationally still assert the primacy of car travel and free-flowing car traffic. It's an odd situation, but no less true. Here's a clip from 1972 on part of this: 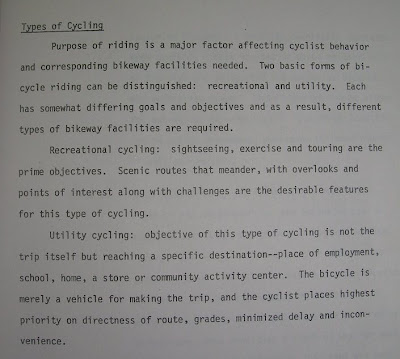 I'm not sure that demand figures are particularly useful in an environment in which the highway fees that motorists pay only cover between 1/4 to 1/3 of the costs of constructing and maintaining the roads. I think that BonB previously exposed the information from the SRC consultants showing that the imposition of the tolls needed to pay for a 3rd bridge would essentially solve the congestion problems created by the inflated demand numbers used during the study.

I would like a lot of things, however, I'm not prepared to pay for all of them. BMW would be crazy to base their production on the fact that I would like to drive one, yet that's exactly what the road planners do.

I think the missing piece in the analysis is class, as in talking about moderating demand for single-occupant vehicle trips means subjecting wealthy folks to the idea of limits, which is very foreign to them — as in, virtually unAmerican. The whole system is built to serve the most affluent among us, taxing everyone (recall Chuck Marohn and Joe Minnocozzi’s maps showing that the poor sections of town provide massive subsidies to the wealthy sprawly areas) to spend more and more on those who have the big homes at the edge of the dendritic tentacles of sprawl near the golf courses and in the hills.

That is what makes these people respond with such vitriol to suggestions that they should pay their way — you are challenging their entire world view, which is one in which they tell themselves how highly taxed they are and so they deserve top-flight services. And congestion just wrecks their whole mindset, because congestion is the inevitable byproduct of their life choices, and so they come up with increasingly bizarre justifications for trying to build more and more capacity (like the “my kid will DIE if we don’t build a new bridge” — which, if they really believed it, would be an argument to move, not to demand some giant boondoggle highway project).

The sense of entitlement that propels the “Build it Now” lobby is just staggering.

@DTR - But that's the point! One of the most important tools in Transportation Demand Management is pricing.

We do not disagree very much if at all! (Perhaps not mentioning pricing was a mistake.)

(Elsewhere, on FB a commenter surfaced a pass at a Libertarian critique of "induced demand." But its conclusion was the same: "If congestion is the issue, then...the solution is congestion pricing." This may yield a separate post by itself over the weekend or something.)

@Walker - Autoism is a hegemonic ideology! It is invisible, and embedded in the "natural" order of things as "common sense." That's the take here, anyway.

(As a potential moderation note, the rhetoric of "entitlement" focuses on individual psychology and expectation, and has been used too much probably as an insult. "These/those people" is marker of sorts. Because of the deep embeddedness of autoism, it has not seemed like "entitlement" was a very useful category for analysis, and is probably something to avoid here. Too much on people and not enough on the underlying policy errors. etc, etc.)