I-5 Kuebler to Delany Road Project Doubles to $35 Million, on OTC Agenda

The Portland debate about decongestion pricing will be the lead item at the Oregon Transportation Commission, meeting today in Portland. Eventually this will filter down here, and at some point it seems likely we'll finally be able to have a conversation about decongestion pricing on the Marion and Center Street bridges and perhaps other places in Salem. But at the moment this remains a "third rail" kind of topic. (Full agenda here.)

More immediately, the OTC look to approve funding and changes to an I-5 project between in South Salem. The project would roughly double in budget, and add a construction phase to what had been just a design phase. 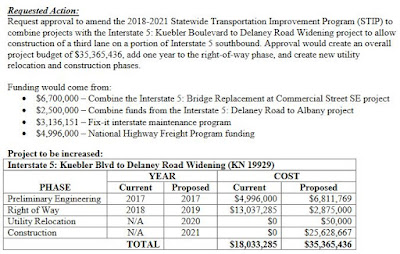 The background and history is a little interesting - look at the date of the Record of Decision!


In the Salem area, Interstate 5 was originally built with two lanes in each direction. By the late 1970’s and early 1980’s Salem ’s population growth and the increasing travel demand statewide indicated additional capacity was needed on Interstate 5. In response, the Oregon Department of Transportation (ODOT) initiated a planning and design study for widening the freeway to three lanes in each direction . The process eventually resulted in release of a draft Environmental Impact Statement (EIS) in 1986 and a Record of Decision (ROD) by the Federal Highway Administration (FHWA) on August 23, 1988.

The freight industry would benefit greatly from widening the remaining two lane segment between the Kuebler Boulevard and Delaney Road Interchanges. Medium and heavy trucks make up approximately 22% of the vehicles traveling through this area. Freight traffic is particularly impacted by the lack of a southbound third (climbing) lane between the Battle Creek box culvert and the Commercial Street Southeast on-ramp. This steep segment has a continuous grade of 5% to 6% for a distance of over 3500 feet. The current two-way average traffic volume is 60,000 vehicles per day in this location, and is projected to grow to over 84,000 vehicles per day by 2040.

The current Interstate 5: Kuebler Boulevard to Delaney Road Widening project was added to the STIP in September of 2016 to develop preliminary engineering plans and estimates, perform a re-evaluation of the EIS Record of Decision, and pursue purchase of new right-of-way for widening in both directions. Additional freight funding was approved by the commission in September of 2017 bringing the current total project budget to $18,033,285. Approval of this request will provide sufficient funding to add utility relocation and construction phases to the project.

There's a teensy bit of scoping south of the Enchanted Forest area to Albany, but the great bulk of the project is between Kuebler and Delany Road.


ODOT proposes instead to split off $2,500,000 of this project budget [south to Albany] and combine it with the Interstate 5: Kuebler Boulevard to Delaney Road Widening project. The remaining $500,000 in the Delaney Road to Albany project will be used to complete a more modest reconnaissance study.

The project also appears on the SKATS agenda for next week (we'll have more on that meeting in a separate post later):


The SKATS Transportation Improvement Program (TIP) currently includes a project for the design and right-of-way only to add one travel lane in each direction of I-5 between the Kuebler Boulevard and the Delaney Road interchange ramps which includes re-constructing the Battlecreek Road overpass and the I-5 bridges over the Commercial Street exit ramp....

At the May 17th Oregon Transportation Commission (OTC) meeting, ODOT is requesting that the OTC approve the addition of $17,332,151 to the project and add a utility relocation phase and construction phase, bringing the total project amount to $35,365,436....

According to the SKATS Public Participation Plan and the TIP Management Process, an amendment of the SKATS TIP for adding the construction phase will require a 30-day public review and comment period and a public hearing of the SKATS Policy Committee. SKATS staff will discuss the timing of that process with ODOT staff after the OTC takes its action.

There might be more to say during the Public Comment period, or again on the post about the SKATS meeting. (See here for some previous criticism of it.)
Posted by Salem Breakfast on Bikes at 7:00 AM

As a result of the improvements made to i5 at the keubler interchange and the new proposed improvements, the noise level on the east side of i5 have increased and are going to increase again. The homes along Baber ct se have been adversely affected. The report from 2012 is inadequate to accurately reflect these noise increases and does not accurately reflect the number of impacted homes. Since the properties are not as densely populated as the west side, homes are impacted that are not adjacent to the freeway. A sound deadening wall will be required on the east side to abate the increased noise level. The report from 2012 makes note of estimated sound levels in the 70db range which would allow for construction of a wall if the number of affected houses were accurately portrayed. The cost would be about 1% of the proposed budget for the keubler to Delaney project and should be added to the project scope. Jkendall95@gmail.com