Parking on Church, Cottage Demolition for Cars - at SCAN and Highland

The Bush Park area neighborhood association, SCAN, meets this week, and they are in the middle of several interesting transportation items, including parking and crosswalks.

At the March meeting of SCAN, a neighbor said


that his CPA firm is purchasing the commercial building at 2150 Commercial St. and plans to tear down an existing building to add parking. There are currently only 12 parking spaces to serve the building and they need 29 parking spaces. He hopes that SCAN will support this.

The demolition permit was issued April 25th, and they didn't waste any time.

If they were adding more housing or adding more commercial space, the demolition would be easier to understand.

But this demolition is for one of the absolute lowest forms of land use: free car storage. It will generate less property tax for the City and generate no increment of vitality to the neighborhood. A cooperative agreement with a nearby parking lot might have met the demand for the business also.

We have a big housing problem, and here we are subtracting from our stock. Demolishing existing housing for surface parking lot expansion is a careless solution and represents a failure in City policy.

In April, there was conversation about a different parking problem:


[A neighbor] brought up the issue again about parking on the east side of Church Street. The neighbors have requested three hour parking, but nothing has been done. Now the City has announced the installation of parking meters....Parking meters are not appropriate in an historic district. Most of the cars parked all day now have Salem Hospital stickers on them. [Another neighbor] expressed her opinion that parking meters do not belong in a residential district. Councilor Andersen brought up the issue of speed humps as a possibility for Church Street now that more have been approved for the new bikeway in north Salem. Councilor Andersen said he would organize a meeting with City staff and representatives from the neighborhood and SCAN to discuss the parking meter issue in the near future.

So that will be interesting to follow, and in multiple ways. There might be an opening to talk more about the benefits of priced parking, about the creation of local parking districts whose proceeds stay in the district to fund other improvements. It might be possible too to talk more about speed reduction and improvements to a Church Street greenway concept better to support walking and biking.

This section of Church Street has been contested in multiple ways and one of them was resolved a couple years back when the sidewalk alignment was pushed inside the lot a little, away from the street.

At the former Blind School, the Hospital's sidewalk plan was altered to accommodate the Sweet Gum trees and their root systems on the east side of Church Street. They are one of the last trees to lose leaves and provide a splendor in late fall and early winter when everything else is bare and dreary.

According SCAN's Historic Preservation, Parks & Gardens Committee, the trees have a link to a Salemite of some eminence:

Interestingly, there was a recent and very different take on Sweet Gums - not necessarily about those on Church Street, it should be said, since the new sidewalk was built specifically to accommodate them, and hopefully they will not create a new round of problems. 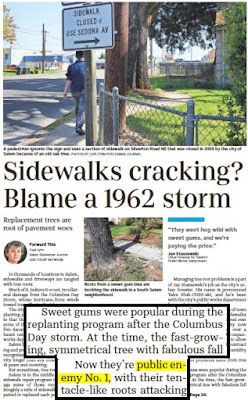 
Sweet gums were popular during the replanting program after the Columbus Day storm. At the time, the fast-growing, symmetrical tree with fabulous fall color seemed like a good choice. They were a bargain, too, purchased at a less-than-wholesale price from a local property owner who had an orchard full.

Now they're public enemy No. 1, with their tentacle-like roots attacking sidewalks and their brown spiky balls making a mess on the ground and creating additional hazards.

The "bargain" aspect is interesting here. Was Carkin involved in this also?! There might be more to this story!

More generally, tree and shrub fashions might be an interesting subject for more urban history. There is the tantalizing prospect of other Sequoias from 1872, like the Waldo Tree, and their mid-century return to popularity. Now we have this Sweet Gum mania. A number of Plane Trees around town can be traced to Lord & Schryver, and the Floral Society directed rose plantings. What other trees and bushes were popular during particular periods, can be traced to specific historical actors, and what plants and associated landscaping remain today as exemplars and traces?

Moving to the May meeting, on the agenda are a couple of proposed crosswalks:


Discussion about installing crosswalk on Liberty St. SE at Bush. Also discuss a possible second location, such as Liberty & Lincoln or Washington

Considering the axial role of Bush Street at a main entry to Bush Park, it is strange that east-west travel to the park is not accommodated better. There is only the light and crosswalk at Myers. We've really made the autoist move to prioritize car north-south car travel on the Liberty/Commercial couplet.

Better connectivity across Liberty/Commercial would be helpful.

The Highland Neighborhood Association meets on Thursday the 10th, and there's a couple of interesting things to note in passing.

At last month's meeting, a neighbor complained about improper walking:


Another concern that was brought to the attention of the association is that pedestrians are not using proper crossing areas and wanted to know how to stop it. One suggestion was to talk with our officer at the meeting and ask if there is a way for them to make point of stopping in the area when they are doing their reports so that they can observe the issue.

On this understanding, the burden must be on people walking to behave properly and to stay out of the way; the burden is not on drivers to proceed slowly and cautiously. This autoist perspective supports pedestrian displacement systems to get people on foot out of the way.

On conversation about the proposed relocation and expansion of the UGM shelter, there was a take on induced demand that we probably don't talk enough about:


The concerns of some of the neighbors and business members is that there would be no resources available for the community and the impact the new facility could have on the neighborhoods. Some felt that the model that was presented would not solve the issues while others felt that the scope and size of the facility could bring in more homeless people in to the area as well as what would be done for those homeless that are rejected or refuse to stay in the shelter and where those people would end up during hours that the mission is not available to them.

There are two big debates in the community right now, and many participants do not have consistent takes on induced demand.
The cases are not exactly parallel, and it is a partial disservice to both to strip them down this way as if they were exactly the same. Still, there are some very general structural parallels, and both debates would be better if we acknowledged induced demand and its consequences. It may be that advocates for the shelter do not adequately account for induced demand; advocates for the SRC certainly do not.

Our thoughts about parking also don't account for induced demand: Our oversupply of free parking induces more drive-alone trips and erodes support for transit. Altogether we lack a good theoretical framework for talking about and evaluating induced demand on different kinds of civic goods and services.

The Highland Neighborhood Association meets Thursday the 10th at 7:00 p.m. in the North Neighbors Resource Center, 945 Columbia St NE.
Posted by Salem Breakfast on Bikes at 7:00 AM