Even with cyanotoxins, our public water system is almost certainly safer than our autoist public road system.

City Council meets today at noon for a special emergency session occasioned by the water advisory issued earlier this week. (There is no published Staff Report at the moment.) 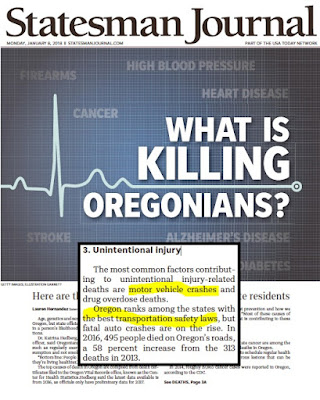 In the furor over cyanotoxins in our tapwater, our risk assessments of driving and of drinking slightly contaminated tapwater are interesting to compare. So far as we know, no one in Salem has been killed by the elevated levels of cyanotoxins. But we tolerate an amazing amount of death and injury on our roads. Drinking water and moving around the city should both be routine and safe - but it does not seem we apply the same standards to both. We see one as a clear public health matter, but struggle to see public health in the other.

Auto use kills many, especially more vulnerable road users not themselves inside a metal carapace.

Here's a previous round of water worries. In 1909 there was an outbreak of typhoid fever. We got our water from intakes on the Willamette near the Slough and tip of Minto Island, and it was frequently fouled by sewage and industrial waste. Portland had shifted to Bull Run water in 1895, and in response to a similar typhoid outbreak, in 1908 Eugene voters approved financing a public water company. Salem debated this also in 1909-1911. There was a widespread interest in the purity of "sweet mountain water."


Under dodgy circumstances Mayor Lachmund vetoed the proposed purchase of the Water Works, and it wasn't until the 1930s that Salemites finally moved:


Public pressure for a healthy water system continued unabated until a Mountain Water Party was elected and the City Council finally acted in the early 1930’s. They purchased the private water system and sold 2.5 million in bonds to build a new mountain water system using the North Santiam River at Stayton Island as the source. This was a daring step by the City Council even though the citizens had voted to approve the bonds. A very vocal minority thought the mountain water system was far too expensive and felt we should stay with what we had, because it was cheap.

The mountain water system was built in 1936 and 1937. It consisted of an intake and a buried perforated pipe for filtering the river water through the pervious cobble and sands on Stayton Island.

You can read more at the Salem Online History and in Frank Mauldin's book, Sweet Mountain Water: The Story of Salem, Oregon's Struggle to Tap Mt. Jefferson Water and Protect the North Santiam River. In the Library's photo collection there are several images of the Water Works at the southeast corner of Trade and Commercial, some of whose brick foundations were revealed during excavation for the new Commercial Street Bridge. As we consider what future changes we might need to make to our water filtration system, the prospective cost of this unanticipated project is another reason to be skeptical of the value of a giant bridge and highway across the Willamette River. Do we want clean drinking water we don't have to worry about or to shave a couple of minutes off our drive-alone commutes?
Posted by Salem Breakfast on Bikes at 7:00 AM

Email ThisBlogThis!Share to TwitterShare to FacebookShare to Pinterest
Labels: City Council Meetings and Agenda, Drought and our Water Supply