Ongoing Struggle with Greenhouse Gases: At the MPO

Our local Metropolitan Planning Organization meets today, Tuesday the 26th, and they continue to fight the rising tide of sentiment and science on greenhouse gases.

Last month's discussion on the prospect of including a goal about greenhouse gas emissions in the 2019 Regional Transportation System Plan elicited a lot of foot-dragging. So much boils down to "don't tell me what to do!" It's about autonomy and home rule, the freedom to make and even relish mistakes, rather than about the proper - or even just a "good enough" - policy response to climate disruption.


The committee next considered the seven options for the wording of Goal 7. These options were developed based on last month’s Policy Committee discussion, input from the public survey, and the letter from the Salem City Council. Paul Kyllo said his preference is Option D. Mayor Tiffin said he could support Option D but also likes option E, because it leaves the option of local governments to have these conversations as needed, and Option E partly names the issue without using a trigger word that potentially stops the conversation. Mayor Clark supported this idea of a goal that allows jurisdictions to do what they want to do and be self-determinant. Commissioner Brentano said he is okay with individual jurisdictions pursuing policies on their own, but he has concerns about a regional goal that binds this group and Marion County. Commission Brentano said that Options A or B (or the original goal language) would still allow local jurisdictions to have the flexibility to have local policies on this subject. Mayor Clark suggested in Option D substituting “according to” with “with flexibility for.” Sean O’Day suggested substituting “according to” with “without interfering with.”

Councilor Jim Lewis commented that the Salem City Council has directed him, as their jurisdiction’s representative, to support Option C: “Planned to minimize the impact(s) to the natural and built environment and to reduce greenhouse gases “ - per 4/23/18 letter from Mayor Bennett on behalf of the Salem City Council, and anything else he’d want to discuss with the full city council. Kathy Lincoln reiterated that local and state residents do consider reduction of GHGs a critical issue.

Mr. Jaffe noted that other MPOs do not adopt by unanimous vote but rather by majority or supermajority. There was also discussion of how the Cooperative Agreement could be revised, but that would take time and may not result in a better process. Mr. Jaffe also mentioned that the jeopardy of not having an adopted plan is that projects in the TIP would eventually be stopped without an adopted Plan.

Chair Clark said that this committee has had difficult issues to decide in the past. She thinks that what makes this MPO stand out and makes it stronger as an organization is that they find ways to reach agreement. She would hate to lose that by eliminating the unanimous process and moving to a majority vote on SKATS. She said there is a space for local jurisdictions to try things that are in the best interest of their communities, but they need to recognize that they don’t have jurisdiction over their neighboring jurisdictions. Regional planning is best done by best practice and collaboration. If a jurisdiction wants to add an overlay for greenhouse gas as part of their planning that is fine, but the city of Keizer won’t accept a resolution passed by the city of Salem as mandatory on Keizer.

Perhaps Chair Clark should give more thought to the nature of "best practice" - is it more about amity on a committee and between local governments? or is it about policy itself and the actions it prompts?

(See last month's post for more on goal 7, as well as posts from this winter and spring tagged SKATS for more of the on-going debate.)

Meanwhile, DLCD is considering new formal Rules for Transportation Planning, and they have several options that include greenhouse gas emissions. It is difficult to be optimistic that we will make the needed strong actions in time, but action is coming, and what may be optional today seems likely to be mandatory in the future. 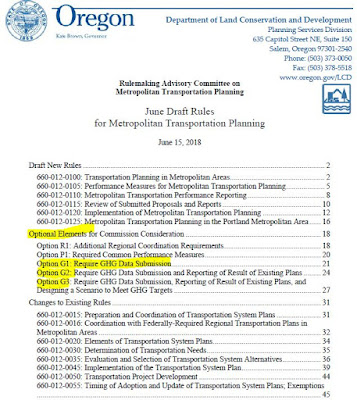 On this SKATS seens sure to object and delay as they can.

Finally, there's a proposed letter of support for a BUILD application to fund the big McGilchrist project from 12th to 25th streets. 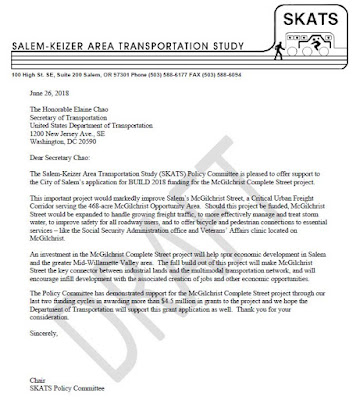 From US Department of Transportation announcing the BUILD program and changes from the TIGER program it replaces:

Projects for BUILD will be evaluated based on merit criteria that include safety, economic competitiveness, quality of life, environmental protection, state of good repair, innovation, partnership, and additional non-Federal revenue for future transportation infrastructure investments.

To reflect the Administration’s Infrastructure Initiative, DOT intends to award a greater share of BUILD Transportation grant funding to projects located in rural areas that align well with the selection criteria than to such projects in urban areas. The notice highlights rural needs in several of the evaluation criteria, including support for rural broadband deployment where it is part of an eligible transportation project.

ODOT is also applying for BUILD funding on the I-5 project between Albany and Kuebler. That seems like a better match for the current program, but we'll see. Maybe the City's BUILD application will be competitive. (Previously on the I-5 project, see "I-5 Kuebler to Delany Road Project Doubles to $35 Million, on OTC Agenda." There will be a Public Hearing at SKATS next month prior to adopting the project formally into the funding list. This seems like a total rubber-stamp formality, but it would be interesting if there was a way to gum up that decision in order to extract concessions on, say, greenhouse gas and climate disruption...)

SKATS Policy Committee meets Tuesday the 26th, at noon. SKATS is at 100 High St. SE, Suite 200, above Andaluz Kitchen and Table Five 08.
Posted by Salem Breakfast on Bikes at 7:00 AM