These crosswalk education and enforcement actions are always welcome, but because we tie them to special grant funding, they also get framed up as extra enhancement or amenities, and do not get framed up as protecting a core part of mobility. It would be interesting to know if the Police report internally on approximate age, gender, and ethnicity in these stops. Does the laudable project for crosswalk safety get tangled up in less laudable profiling bias?

Also, the Police discusses the compliance rate as a matter of knowledge of the laws. But it may also, may even instead, be a matter of our autoism: The cultural bias for car travel and the belief that people on foot need to stay out of the way. It's a matter of power, not just knowledge.

In a separate release, the Police shared their monthly traffic summary:


As an agency during the month of May, Salem Police officers arrested 52 people for Driving Under the Influence of Intoxicants, issued 144 citations for Driving With a Suspended License, 66 citations for driving without a seatbelt, and issued another 1521 citations and warnings for various other offenses. 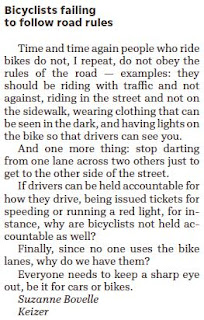 A week ago there was another LTE about lawless bicyclists, and when I read these summaries from the Police, I'm rather struck with the scope of lawless motoring.

(Here's an updating summary, and month after month, there are several tens of DUI and Suspended License, and 1000 or so other citations and warnings. Every month. And that doesn't account for speed studies, which as we saw at Commercial and Vista should result in over 4000 speeding citations each day! The Police interact with only a very small proportion of speeding and other infractions. Lawless and potentially lethal motoring is a much bigger problem than bicyclists behaving badly.)
Posted by Salem Breakfast on Bikes at 7:30 AM

My proposal is that every pedestrian should carry a stick of their choosing, and give a good whack to any car that doesn't stop when they are trying to cross the street. The headlight might be a good location for that whack.

Then say how relieved you are that they only hit your cane, and not part of your body. Just think of how much worse it could have been.

And here are the official results from Salem PD:

"On June 8, 2018, the Salem Police Department Traffic Unit conducted a two location vehicle and pedestrian safety campaign in partnership with Oregon Impact. The goal of these campaigns is to enhance safety in our community through education to both pedestrians and vehicle operators. Locations for the campaigns are chosen based on crash and complaint data received by the Department.

The locations designated for the campaign on June 8 were: the 1500 block of Market St NE and the intersection of State St and Winter St. Although Oregon law states that every intersection should be considered to have a crosswalk, whether marked or not, officers chose to focus on educating drivers who committed violations at marked crosswalks. During this campaign, 55 drivers were contacted for a variety of violations, 50 of which were pedestrian-related. Of those 55 drivers, 43 received education and warnings and seven were issued citations. 30 warnings and 21 citations were issued for other violations. Additionally, two vehicles were towed and one arrest was made.

Drivers who were contacted, were educated on the law and provided educational materials in English and Spanish. It is our hope that these campaigns make the streets of Salem safer for all the people in our community."

"The Salem Police Department Traffic Unit conducted a vehicle-pedestrian safety campaign on September 14th, 2018. The goal of these safety campaigns is to enhance safety in our community through education to both pedestrians and vehicle operators. Locations are chosen based on crash and complaint data received by the department.

During the campaign, 68 drivers were contacted for pedestrian-related violations, with the majority receiving education and warnings. There were 22 citations/warnings issued for other violations and one cite and release arrest was made.

The locations designated for this campaign were Summer Street NE at Hood Street NE and Commercial Street NE and Columbia Street NE. These location was selected due to complaints of pedestrians nearly being struck by vehicles near the Boys and Girls Club and Highland Elementary School. Although Oregon law states that every intersection should be considered to have a crosswalk whether marked or not, officers chose to focus on education of drivers found to be in violation at marked crosswalk locations.

The Salem Police Department will also be working with the Public Works Department to address engineering improvements which may help increase crosswalk visibility/safety at the above intersections, and will also continue to work on education and enforcement projects to enhance traffic safety."