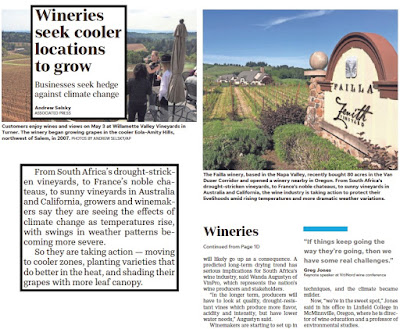 A couple years ago there was a flurry of vineyard land sold to California buyers. The Kendall-Jackson empire was the most notable participant. There were others also.

The article about the sales, as did the piece celebrating 50 years of local Pinot Noir in 2015, missed an important part of the story, however.

Finally, a piece in the Sunday paper today addresses it a little. "Wineries seek hedge against climate change." It was off the AP wire, and was about a global trend, and not specifically about Oregon and the Willamette Valley.

There is a story to be written just about our local vineyards, about the change in climate and about changes in the way the industry is organized and financed.

Over at Chehalem, a second-generation winery, but now something of an "old-timer," about the 2017 vintage they wrote:


The warmest vintages we’ve ever seen in the Willamette Valley over our more than 50 years of grapegrowing are the last five. Period.

We live in a bona fide cool climate here in the Willamette Valley. It’s why our wines have a great acid backbone that gives the wines a brightness of fruit and makes them perfect for aging and ideal with food. UC-Davis’ Winkler classified warmth and coolness by accumulating the recorded heat by growing season for the world’s wine regions. The Willamette Valley is designated Region One, the coolest, in company with Germany, Champagne and Burgundy.

(To determine degree-days, 50 degrees is the baseline. During the growing season, a day with a 70 degree high counts for 20 degree-days. The daily number over 50 is summed from April to October to get the total. Going from 1970 degree-days to 2651 degree-days is a huge shift. It's not hard to see Region Three here on the horizon in our lifetimes. That's Prosser in Eastern Washington and Sonoma!)

One of the strangest things about SKATS and Marion County government is how a region with agriculture so central could ignore these basic trends in growing season characteristics and harvest time. Agricultural data clearly shows warming and local disruption. 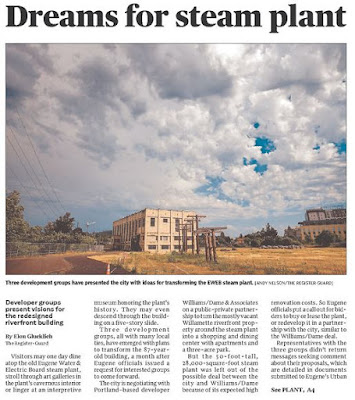 The Register-Guard this week had a piece on three proposed concepts for the old EWEB Steam Plant on the Riverfront. The developer working on the larger project around it did not want the steam plant itself, so the plant was separated from the larger parcel and is being sold and redeveloped separately.

Broadly, the proposals share a restaurant concept and general plan to be a gathering place. Mainly they differ in the details. One of them, for example,


would feature a ground-floor tap room and with a series of small restaurant and retail spaces throughout the interior, according to its submission. Upper levels would include leased work spaces for businesses and classrooms, possibly with lab space for University of Oregon programs. A rooftop deck would let visitors look out over the river.

At this stage it's all just optimistic talk and sales pitch. Anything built will differ in important ways from these concepts.

Still, as our Boise Cascade redevelopment finishes construction with the nursing home and a path system along the creek, it will be interesting to see how Eugene handles a similar project. A little upstream, the University of Oregon is also working on a project to redevelop a riverfront parcel hemmed in by the railroad. It's a real moment in transition.
Posted by Salem Breakfast on Bikes at 1:00 PM

The Newberg Graphic has an opinion piece by wineries that talks about hedging explicitly.

"As owners of family farms, our business is intergenerational. When we plant grapes, we are planning 50 years out. It takes several years before the first wine harvest and decades for grape vines to mature. And we can tell you from experience, we are having to adapt our business model due to the changing climate.

Every one of us in Oregon feels the climate, but as farmers, our livelihoods depend on it. Over the last decade, warmer and drier weather has started affecting what we grow. Instead of planting the pinot noir grapes Oregon is famous for around the world, we are already starting to plant other varietals, such as Syrah, Sangiovese and Nebbiolo that can withstand higher temperatures."

This is the first outright discussion I've seen, and might be a new phase in public-facing talk.

And here's a piece written by a Portland wine journalist about a new certification project led by Jackson Family Wines and the Spanish firm Familia Torres, "Spearheading a Global Initiative to Fight Climate Change."