Council meets on Monday and there's a lot on the agenda. Revisiting the State Street Plan and approval for applications to the new Safe Routes to School funding program lead our interests here. There are several other items that involve parking or transportation.

So it looks like Staff are dissatisfied with the way the State Street Plan shook out? Not only is the Plan back on the agenda, Staff appear to be hinting strongly for some additional tweaks.

The report says "Staff has provided additional information below for consideration." (hint, hint)

Mostly it's about building height and ensuring with more detail that the proposed changes accommodate both residents of the Historic District's wishes as well as the larger goals to spur redevelopment. The trade-off of a reduction abutting the District and an increase elsewhere seems like a good one.

From the Staff Report:
Still, even with putting all the parking in back so there's no mass there to cast a shadow, the project team earlier in the year showed a four story development of the sort that is desired, but still didn't pencil out.


So there remain questions about whether the height and parking requirements actually add up to something that will in fact induce redevelopment. There may be ways the current plan as approved remains more symbolic than effective.

Public Comment on the plan has been heavy on neighbors who don't want development along State Street and citizens who want State Street to remain a traffic sewer, draining downtown and serving regional movement, instead of reverting to an older main street type.

But there wasn't a lot of comment from prospective developers or property owners who said "yeah, this will get me moving."

Unfortunately there is no more detail on which lot is proposed for a park. If it's the lot on the north side of State Street at 21st, that seems like unnecessary ornamental emptiness. But if it's the lot between Muchas Gracias and the corner convenience store, that lot has creek access, which is rare in Salem for parks, and it might make a very nice small park. 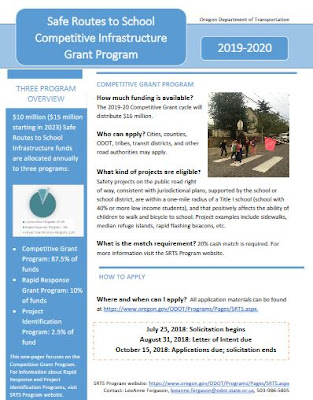 On the Safe Routes applications, as they did in May with the All Roads Transportation Safety Program, rather than listing specific projects for Council, Staff is merely asking for a conceptual approval in general and then will come back at a later date with the specific projects.


Given the short timeline between availability of project solicitation (July 23) and deadline for Notice of Intent (August 31), staff is recommending that City Council authorize the City Manager to submit letters of intent. Staff will return to Council for approval to submit final applications prior to the October 15 deadline.

So there's not a whole lot to say here other than "yay!"

Though it may not look terribly important, the proposal to


remove both sides of Winter Street SE between Ferry Street SE and Bellevue Street SE from the adopted Pay to Park District included in the City’s Transportation System Plan (TSP), remove parking technology equipment recently installed within this area, and direct staff to work with Willamette University and the Citizen Advisory Traffic Commission (CATC) to establish time limitations as indicated in the TSP

may be meaningful. Seven pay stations were installed on that stretch of Winter Street in June, and Willamette University said "whoa there."

Back in 2009, the WU Campus Facilities Master Plan identified Winter Street as vacated and as a greenway. It's important to know Willamette has designs on Winter Street!

Removing car traffic is not in and of itself a bad thing of course, but since Winter Street has such importance as a north-south axis and connection with the Winter-Maple Greenway to the north and Bush Park to the south, preserving public access is important, and it's not clear that the City should fully vacate the right-of-way and give it over to the University. Winter Street here is something we need to pay attention to in order to maintain the appropriate public level of service on a Winter Street alignment. Through-traffic is important here for those traveling on foot and on bike.

As for the paid parking itself, we have seen a segment of Church Street removed by the Hospital's Blind School property, now this section of Winter Street, and if we want to make real inroads on reducing drive-alone trips, we will need to stiffen our resolve to implement right-priced parking more consistently.

Speaking of parking, at Council qua Urban Renewal Agency is the proposal for another $2 million in URA funding for the Police Station. Ditch the Structured Parking! That's $2 million in padding right there easy to cut.

Finally, there is $40,000 in Mill Creek Industrial Park urban renewal funding proposed to support a study for widening the Kuebler/Cordon bridges over the railroad and Mill Creek. A lot of money is going here for big box, industrial park development, it's not at all clear that the property tax generated will ever balance the cost of brand new infrastructure to service the area.

Bullets for the rest (maybe we'll come back to these later):

Here's a project the City and School District should consider. Instead of paving over the pool and expanding the parking lot at the old Leslie Junior High, how about structuring a project that meets mobility needs with better walking and biking facilities, both on school property and on the street system. (See a previous note on the prospect, now certain, of the demolition of Leslie.)

From a City release:

"The City Council voted Monday to revise the building heights allowed in the mixed-use zones proposed as part of the State Street Corridor Plan project. Specifically, the Council amended its July 16 approval of the project as follows:

-In the Mixed Use-I and Mixed Use-II zones, reduce the maximum building height next to National Register Residential Historic Districts to 45 feet.

- In the Mixed Use-I zone, increase the maximum building height from 55 feet to 65 feet except next to National Register Residential Historic Districts"

About the parking meters on Winter Street, CANDO writes:

And on the Police Station, the SJ writes:

Urban Development Director Kristin Retherford assured board members that other urban renewal projects would not be sidelined by shifting money over to the police station. The allocation represents about a tenth of the Riverfront-Downtown urban renewal area's more than $21 million budget for the 2018-19 fiscal year."

ODOT sent out a press release and it looks like only about 10% of the Safe Routes requests will be funded!

"SALEM – Communities around the state are ready to improve safety for Oregon’s youngest population: ODOT received 142 letters of intent requesting a total of almost $100 million to invest in safe routes to school. This first round of funding offers $10 million, so there is clearly a need for the newly funded Safe Routes to School infrastructure program."