The City's been a little stingy on posting updates more detailed than breezy "building buzz" videos on the new Police Station, so it was interesting to read the article about the value engineering and proposed new funding. (They finally posted the basic plan and survey results. The construction cam has seemed to be stuck for several days now, and is not updating.)

One item of context left out is that on the $100 million road bond in 2008, the City consistently secured bids under budget. In total bids seemed to come in at about 80% of the budgeted amount. This 20% gap allowed the City to rope in a bunch of smaller projects and by count (not by dollars!) added about 50% more projects.

That was smack dab in the middle of the Great Recession.

Now things are different, and it's no surprise that we see the opposite in this latest bond project.

Maybe there's a story of mismanagement or error here, but at the moment this does not seem to rise to that. Instead it looks like a story of the cyclical vagaries of our economy.

Moreover, the value engineering and proposal to use Urban Renewal Funds to fill a gap actually look to be within the range of things on which reasonable people can disagree.

Officials had earlier allocated $4.3 million from the area's urban renewal fund for street improvements, such as opening portions of Division Street NE and Liberty Street NE near the facility to two-way traffic....

It is not outrageous to think the community room, public restrooms, plaza, and artwork in the public space (not anything on the interior!) could meet standards for urban renewal funding.

Examples of those cuts include working with local suppliers to obtain the most efficient metal paneling for the outside of the building and reducing the number of spaces in a protected police parking deck from 100 to 70.

"That's one that's painful," Dannen said, though the hope is those spaces might be brought back later in the project, depending on how much money officials are able to save as it progresses further.

Taking increasing costs into consideration, the size of the police facility is also being slimmed down from about 115,000 square feet to about 104,000 square feet, without major program sacrifices, Dannen said.

It is wrong to be so attached to structured parking, but at least they reduced it as well as cutting 11,000 square feet out of the building total.

This is looking more like the project that should have been approved at the very start.

Still, the City should consider further cutting the structured parking and using nearby surface lots or the Marion Parkade. At $25,000 to $50,000 a stall, there's a good amount of savings there for space and structure that just sits with car storage.

The public-facing amenities might look like frills, but they are an important part of ensuring the project is knit into the community and not merely a bunker and expression of an over-policed city or too-militarized force. 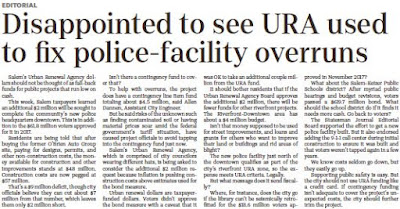 Today the paper criticizes the proposal to use URA funds.


It should bother residents that if the Urban Renewal Agency Board approves the additional $2 million, there will be fewer funds for other riverfront projects. The Riverfront-Downtown area has about a $4 million budget.

Isn’t that money supposed to be used for street improvements, and loans and grants for others who want to improve their land or buildings and rid areas of blight?

The new police facility just north of the downtown qualifies as part of the city’s riverfront URA zone, so the expense meets URA criteria. Legally.

But what message does it send fiscally?

They conclude: If contingency funding isn’t adequate to cover the project’s unexpected costs, the city should further trim the project.

Parking garages. That's where the fat is!

The next Open House on the Police Station is Wednesday July 25th at 5 p.m. in the South Salem High School Library, 1910 Church ST SE.
Posted by Salem Breakfast on Bikes at 7:00 AM