Council meets on Monday for a special meeting and formal Public Hearing on the State Street Corridor Plan. There is one item only on the agenda.

As new comment has come in, mostly it's a rehash of support or opposition, trading more on sentiment than fact or probability. There's a lot of fear and anxiety around change.

A couple of new items might be worth noting, however.

With their formal letter of support, SESNA cited a 1995 study that shows the pent-up, long-standing desire for a better State Street. I hadn't seen this called out before.

A group of Salem Area Realtors seems to echo this, but crucially they display our autoist incoherence, supporting the zoning changes but not road design. 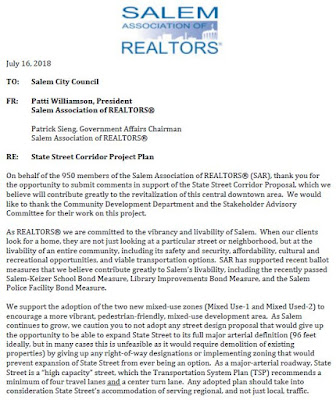 
We support the adoption of the two new mixed-use zones (Mixed Use-1 and Mixed Used-2) to encourage a more vibrant, pedestrian-friendly, mixed-use development area....

[But] As a major-arterial roadway, State Street is a “high capacity” street, which the Transportation System Plan (TSP) recommends a minimum of four travel lanes and a center turn lane. Any adopted plan should take into consideration State Street’s accommodation of serving regional, and not just local, traffic.

Traffic flow contributes greatly to a community’s livability. We want the residents of Salem to be able to easily commute to and from their homes to their jobs or to school without having to sit in gridlock traffic if it is unavoidable.

State Street should be itself a place, as Stong Towns puts it, "a platform for creating value." Realtors should understand this. Any emphasis on regional traffic flow denies the there there. High speeds and volumes harm a place's livability, and at best benefits only the livability of remote places. The Realtors could easily document the price penalty I-5 imposed on nearby lots!

The Realtors' letter asks us to degrade State Street in order to serve people who live far away from it, essentially asking State Street neighbors to absorb a cost and indirectly to subsidize longer commutes for those who live elsewhere and have a longer commute. They want a road or stroad where we actually need a street. (See here, here, and here for more on stroads.)

In the most recent round of comment, one attorney and business owner on State Street gets it. They write:


In a nut shell, State Street has serious problems. The area is not pleasant for pedestrians or bicyclists. The sidewalks are in disrepair and pose a danger to pedestrians. Tree roots have pushed them up thereby creating tripping hazards. Traffic is heavy and drivers often exceed the speed limit. There is no bicycle lane and it is extremely uncomfortable to ride a bicycle on State Street once you are east of 15th street. I rarely see bicyclists or pedestrians on this section of State Street.

State Street seems disjointed and unplanned. Despite the strength of our local economy, there’s been little interest from the private sector in purchasing the vacant lots or the empty buildings. I have two other offices located in Portland and Beaverton. I also had an office in downtown Gresham for 5 years. I have spent a great deal of time in these cities. The proposed amended changes seem to track what has been done in these cities. I have personally witnessed the transformation of these areas. From a situation similar to what we have on State Street to a thriving vibrant area redeveloped with private money.

A new resident of the Historic District, a lawyer himself, and married to an architect and former elected official in Napa, has filed a lawsuit in Federal Court and asks for:


a) A Declaration that defendants, collectively and individually, have violated the NHPA, and that the funds granted under the Intergovernmental Agreement were unlawfully disbursed,

c) In the event the proposed zoning ordinances become law by defendant City of Salem’s actions before a federal court has issued a final decision that a Section 106 is required in this matter, a writ of mandate to the FHWA direct ing the returns of monies from ODOT to FHWA, including $289,950, but not limited to those spent in connection with the Intergovernmental Agreement,

d) A writ of mandamus directed to Defendant ODOT to initiate a Section 106 Review in accordance with the NHPA and 36 CFR 800...

Plus attorneys fees and costs, etc.

Separately, several residents of the Historic District call for the creation of a new MU-3 zone that has more buffer/setback on the alley and slightly lower height limits on the portion of State Street immediately adjacent to the Historic District (basically between 13th and the creek on Court Street.)

Anyway, the demand for a Section 106 evaluation looks like roadblocks, but some creative maneuvering and quid pro quo on the zoning and road design could point the way to a "legislative" compromise that's actually an improvement.

So yeah, things will be testy and loud, but the conflict also creates some space for negotiation and maybe the total package can even be improved.
Posted by Salem Breakfast on Bikes at 7:30 AM

Updated with brief news on a proposal for a new MU-3 zoning to buffer the Historic District and on a lawsuit filed in Federal Court.

A couple of footnotes...

On the current 70 foot high limit and its relation to parking:

"I would also like to address the City’s continued assertions that under current zoning of 'CO', parcels adjacent to homes on Court Street could be subject to a building 70 feet high. My wife, an architect, and I have demonstrated that any depiction of a 70 feet high building on any of the parcels between 14th and 17th street on the North side of State street is inaccurate. Current zoning, lot limitations, and the parking requirements effectively limit the height of any building on these parcels to 2 stories unless the owner either pursues 1) underground parking, or 2) stacked parking with offices or home built on top. Both of the two possible scenarios are financially unrealistic. Suggesting to the public that a 70 feet building could be built on these parcels under current zoning is misleading."

A different person writes on Chemeketa as a bikeway (perhaps also confused on which option is the "diet"):

"I'm very concerned about the recommendation to opt for the Diet plan, that formally routes pedestrian and bicycle traffic onto Chemeketa instead of planning for it on State street. If one intention is to make state street a destination, then routing bike traffic onto our quiet neighborhood street, with reduced parking here is counterproductive, and at the same time drastically changes the dynamic of a peaceful, historical downtown neighborhood." It is interesting to see for the first time an argument to take bike traffic off Chemeketa and push it onto State Street. We may come back to this; as policy it's not very interesting, but as sentiment about the meaning of bike traffic it is interesting. (Also, the address they give is a house that was moved to its current site, and like many appeals to the Historic District, it erases ways the Historic District itself was subject to historical processes and change.)

And from the City's summary on twitter, which has better detail than their other summaries:

Councilor Andersen's FB page has a clip and additional comment.