In the April 23rd City Manager's update was news about an enhanced crosswalk on a corner with South Commercial that had not been marked with one.


The pedestrian safety crossing on Commercial Street SE at Royvonne Avenue SE will be completed by August 2019. The $100,000 project includes installation of a rectangular rapid flashing beacon, curb, sidewalk, striping, and other site work.

It is very near where two years ago Zane Hilton struck and killed Shatamera Pruden as she attempted to cross Commercial.

Though it will have taken two years - a short time really for infrastructure - this is an instance where parental and neighborhood advocacy obtained results. 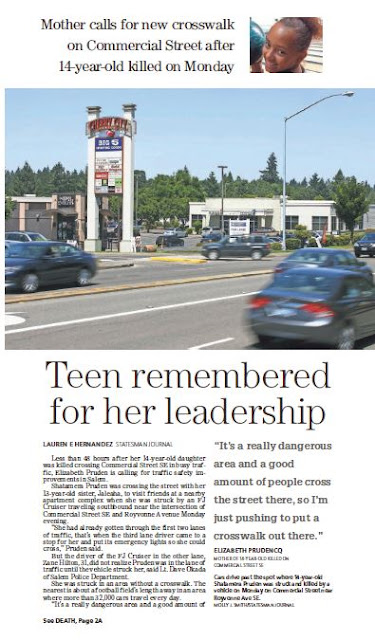 It does not appear that there will be any larger change to the system, however.

The posted speed and most design elements, even with the median, will remain at 40 mph.

Mostly we employ local, ad hoc changes for safety, and do not consider larger changes to systems.

In this spirit we celebrate whimsical stories about duckling safety. 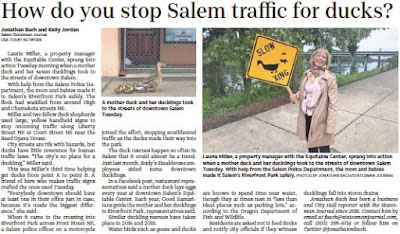 Stories like this have an essential function to support the status quo: Plucky volunteers with signs are able to shepherd the ducks to safety.*


City streets are rife with hazards, but ducks have little reverence for human traffic laws. “The city’s no place for a duckling,” Miller said.

But our framework of human traffic laws struggle also with human children and other vulnerable users of the road. The story about ducks depends on a notion that our traffic laws and traffic system are in fact sufficient, even operate justly, for non-duckling humans.

The problem, however, is not merely a cognitive deficit in ducks. We have a traffic system that is not designed for any slow moving creatures who do not have a sheet metal carapace.

We should be more willing to generalize the problems the ducks have to problems that humans on foot also have. The problem for ducks is more symptomatic than exceptional, but we have to tell duck stories as if they are unusual, and not a sign and symptom of our autoism.

* For a pop culture angle on what is essentially the same problem, Zenyep Tufecki, a scholar who writes on technology and politics, offers her take on "The Real Reason Fans Hate the Last Season of Game of Thrones: It's not just bad storytelling—it’s because the storytelling style changed from sociological to psychological." It is easy to shift this description from Game of Thrones to traffic safety, our current fixation on distracted driving and bad actors, and autoism more generally:


In sociological storytelling, the characters have personal stories and agency, of course, but those are also greatly shaped by institutions and events around them. The incentives for characters’ behavior come noticeably from these external forces, too, and even strongly influence their inner life.

People then fit their internal narrative to align with their incentives, justifying and rationalizing their behavior along the way. (Thus the famous Upton Sinclair quip: “It is difficult to get a man to understand something, when his salary depends upon his not understanding it.”)

The overly personal mode of storytelling or analysis leaves us bereft of deeper comprehension of events and history.

This post forgets that in the works is a new approach (led by ODOT) to change the way that posted speeds are determined, allowing jurisdictions and ODOT to move away from the antiquated "85th percentile" approach.... to a urban context and vulnerable user approach. I think this blog did a story about it, but if not I can find it for you. Sometime this year those rules will take form and be able to be implemented.

The problem with the posts in this blog is its frequent bouts of amnesia. It praises (although this is rare, and always with qualifications to the praise) the way a city makes a safety improvement to the system, or adds protected bikelanes, etc., but then a few weeks or months later rails about how the city or ODOT isn't doing anything about safety or to help biking (the amnesia kicking in again). And I'm very aware why its done this way: its to get the city to do more of the things advocated by the blog poster. But, this approach suffers from a lack of perspective. Overall, I see many, many improvements for safety and multimodal projects in Salem, and the city would do more if it had more resources.

[Now...go ahead a refute what I've said, which is the usual MO at BoB]

Well, there is some truth to what you say: There is a tacking into the headwinds of autoism, a zig-zag in rhetoric as the occasion demands. But some alternation of praise and criticism is not by itself evidence for amnesia or for argument in bad faith.

And a new ODOT process for setting speed won't be adopted until next year at the earliest.

You seem to want to claim the benefits right now of that hypothetical future. But those are not yet, and they are not yet real, and the uncertain prospect of future process, one that still will be cumbersome, is not a substitute for actual changes in the system.

The tone of your comments also seems to suggest you prize a certain notion of "balance" - for example, you imply an overestimate on the number of "protected bikelanes" in Salem, as if we were swimming in a surplus of them right now - and fear we are already devoting too many resources to non-auto travel.

Altogether, I do not think I will persuade you, and will just note that it looks like we disagree on much.

(And as a moderation note, straight anonymous comments are meant more for impersonal things. For opinions, a consistent pseudonym is more useful. See additions to comment field guidelines.)

(Different Anon) I don't see it as amnesia, but as seeing what few good things are happening for what they are... a drop in the bucket. Good things are good, but not nearly enough. And still a lot of bad stuff happens through mere operation of the status quo.

Let's not pull something by patting ourselves on the back too much.

(Added photo of construction progress on the crosswalk)