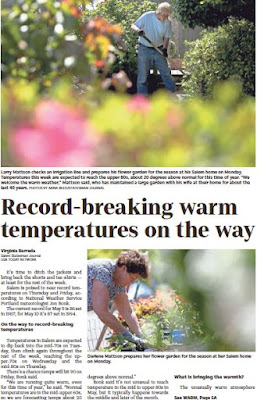 Today we have articles about a Spring heatwave and new news about the sixth Great Extinction in earth's history.

On Friday the Eugene Register-Guard ran a piece about changes to whale movements and tide pool ecosystems in California.

But making connections and threading climate through the whole remains elusive. Stories remain siloed and disconnected.

On Saturday stories about youth (and their future) and cap and trade legislation jostled against a story about our thirst for air travel. But the story was silent on increased emissions from air travel.

It should be alarming that our desperate thirst for commercial air service is seen as an unambiguously good thing. But while "grad rate remedies" are important for parents and school board members, they do not loom over the future quite like climate.

It would be "just great" for the adults to improve graduation rates and to trash the world those graduates inherit and attempt to inhabit.

Our Salem - Is a Climate Action Plan a Solution?

Last month the Advisory Committee for Our Salem met and received a presentation with some preliminary findings on greenhouse gas emissions as well as on other "indicators." On Wednesday the 8th, the City's hosting an Open House for the materials.

Hinessight has already looked at some of the city-to-city comparisons.

But just in absolute terms, too, we have crapped out. While we do have some "adopted targets," we are not close to meeting them, and we have no firm policies in place to meet them.

We are not very serious about these targets. In some areas we hardly even try.

If we were serious about having 3% of trips made by bike and 7% trips made on foot by 2020 - a year and a half away! - we would need to have been doing things very differently. We would have stopped screwing around with the SRC long ago, and would have reallocated staff time and funding resources to walking and biking projects as well as to supporting changes to land use and zoning. 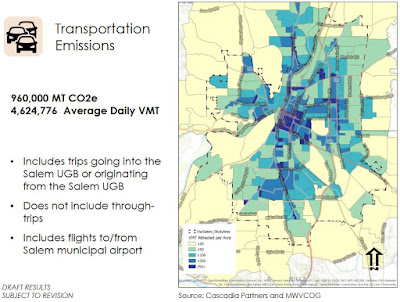 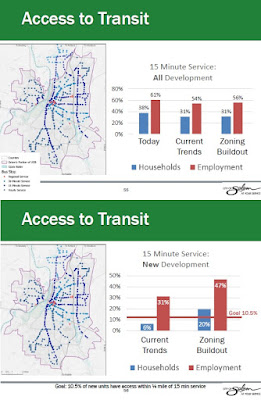 Do we need a whole new study, a new Climate Action Plan, to take these already existing "adopted targets" more seriously and then to build on them?

Maybe we do, but I would like to see more of a kind of forensic analysis about why we have failed to execute on our previously "adopted targets." Does study churn really improve the politics for effective action? Does a new study and process get more people involved and persuaded? Or is study churn a substitute for effective action, a Potemkin theater, a flag to wave, to give the appearance of action?

On the other hand, a new plan could go into much greater detail and specify remedies and process for failing to meet targets. It could have teeth!

It could also be more self-aware in bringing out the tradeoffs we make when we go all in on our thirst for airport expansion and congestion relief.

And it might be useful to have a section on persuasion and politics. How will the study initiate processes and procedures to ensure it is effective and not just the blather of another study.

What about Transportation and Waste? 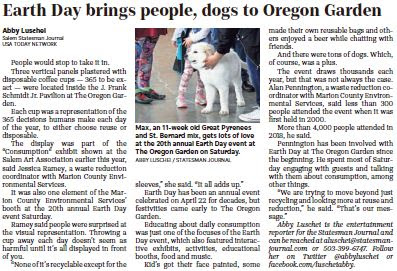 
Three vertical panels plastered with disposable coffee cups — 365 to be exact — were located inside the J. Frank Schmidt Jr. Pavilion at The Oregon Garden.

Each cup was a representation of the 365 decisions humans make each day of the year, to either choose reuse or disposable....

Throwing a cup away each day doesn’t seem as harmful until it’s all displayed in front of you.

That was a great way to visualize the scope of the problem.

But it also shows the way we have locked on to a consumerist model of sustainability: It's about the things. All about the stuff. (Batteries will save us!)

The stuff is in fact a problem. The cups have plastic, among other things. One approach, loosely and generally called "gadget green," offers a solution: We get the same things, but they're better, more green. How about a ceramic or stainless steel coffee cup?

But according to our preliminary greenhouse gas assessment, a greater problem may be the drive in a car to get the coffee.

Again, this is preliminary, and it needs more detail and unpacking, but the first pass at our greenhouse gas emissions suggests waste accounts for only 2% of greenhouse gases, while transportation accounts for 57%. (This may be just the burning, and not the full lifecycle, but that's still quite a disparity.)

By this measure, our car trips are a much greater problem than our coffee cups.

The Open House and Workshop is Wednesday the 8th at the Court Street Christian Church at 1699 Court Street NE, Salem. It runs from 6:00 to 8:00 p.m.
Posted by Salem Breakfast on Bikes at 8:30 AM