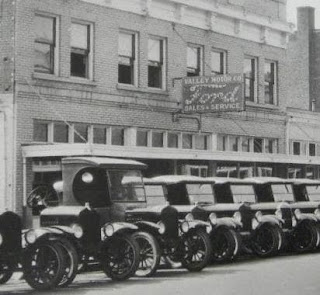 In the Bicycle Week ad for 1919 we saw Watt Shipp's name among the other bike dealers in Salem. Shipp had built a general sporting goods business and diversified into blasting powder.

In 1919 Shipp made another move. Like Otto J. Wilson a decade earlier, Shipp decided to sell automobiles.

In April the Vick Bros decided to focus on tractor sales and this required a move to Portland. They sold their Ford dealership on High Street to a partnership that included Watt Shipp. The new dealership's name was Valley Motor Co.

The High Street location, "a two story brick building 80 by 350 feet," does not appear in the Library's historic photos, and it was very nice to find an image of the building and nearly the whole block face in a history note on Skyline Ford.

The Ford dealership is the approximate site of the driveway to the Transit Mall! At this time half of the block was commercial storefronts, and the other half had houses and churches. (Here's an older picture of St. Paul's: It shows the church of 1850, which in 1922 was moved on the lot and became the "parish hall" and "boy scouts hall" on the map of 1926 below.)

In the photo with the Valley Motor Co. Ford location, on the right you can also see the Derby Building of 1915. Here's a later view of it along a very close sightline after it was enlarged to become the Senator Hotel.
And the Collins-Downing House was originally at 245 Church Street (just above the red "Church" on the map).

Between the wood-framed houses, the brick storefronts, and now the transit mall, this block has had three very distinct phases of redevelopment. (And maybe for the age of Salem, that's typical: The Police Station site also had wood-framed houses, the car dealerships, and now the Police Station. So an interesting question might be, is there a site here with four wholly distinct phases? I can't think of one right off the top. Can you?) 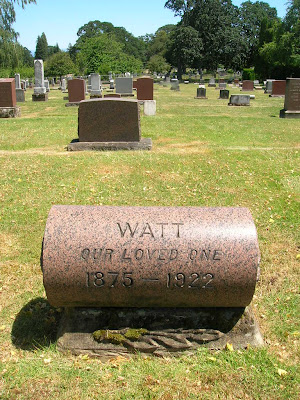 Back to Watt Shipp, to read about this business move in 1919 is sad. He would not know it of course, but we know that he died just three years later, in 1922.

"For several years...[he] complained of stomach trouble and during the last few months the malady became increasingly annoying. A few weeks ago he determined to submit to an operation..."

He died after a second procedure.

More from the obituary:


Watt Shipp and his father, F.C. Shipp, who survives him, moved from Winnepeg, Catoada, where Watt was born on August 9, 1875, to Portland, Or., about 35 years ago and a few years after their arrival Watt Shipp entered the employ of the Fred Merrill Sporting Goods company as a salesman. A short time later he came to Salem.

Mr. Shipp who, at the time of his death, was the head of the Watt Shipp Powder company, first entered the business field here when he opened up a bicycle and sporting goods store on North Commercial street, near where the Gilbert grocery store is now located. This store he operated for nearly 20 years. It was about 11 years ago that he first entered the powder business.

For 19 months Mr. Shipp was one of the proprietors of the Valley Motor company here, but he disposed of his interests in that concern in 1920.

During the years that he spent in Portland Mr. Shipp won for himself a reputation as a bicycle racer and won many medals in contests held at various points in the Pacific northwest. Throughout his life he manifested a lively interest in sports of all kinds.

Mr. Shipp is survived by his father F. C. Shim, and by a cousin, Miss Lizzy Haines, both of whom reside at the Shipp home at 1488 South Commercial street, and by a number of relatives in the east. He was never married.

On the sports page, there is a second encomium.


In the day of 1896 -- when I. H. Van Winkle was manager of football at Willamette university, and Dr. H. H. Olinger was captain of an eleven on which such men as Chauncey Bishop, Cheater Murphy, Kay Bonham and Ed Judd starred -- Watt Shipp, Salem merchant who passed away in Portland yesterday, served as trainer for the local school. It was in this period of Willamette's history that Dr. F. E. Brown served as physical director at the school.

Throughout his long residence In Salem, Mr. Shipp was identified with sporting activities and, about the time he reached his majority, was held to be an authority on those sports in which he participated.

Mr. Shipp's activities as trainer at Willamette came at a time when he was known throughout the Pacific northwest as a bicycle racer. While In Portland, shortly before he came to Salem, Mr. Watt had been employed by the Fred Merrill Sporting Goods company, and while there bad been a member of the famous Rambler bicycle team which was entered in bicycle races from Canada to Mexico....

And this may clarify what had been a small mystery! In 1898, there's a note in the Willamette University Collegian involving Shipp.

"[S]everal protests were lodged against Willamette's team and Watt Shipp was thrown out because he had ridden in races not sanctioned by the L. A. W."

In the late 1890s the League of American Wheelmen wished to have a monopoly on bike racing, and a California consortium of clubs offered a meaningful challenge. Shipp was almost certainly participating in races held by competitors to the LAW, especially the California group.

But Shipp had also always seemed to be too old to be racing for Willamette. That he was a "trainer" and possibly even a ringer rather than student is likely an ingredient in this dispute!

For more on Watt Shipp: