The plan to redevelop the old mushroom plant at State Street and Cordon Road, and bisected by the old Geer Line railroad alignment, is finally coming to the Planning Commission. 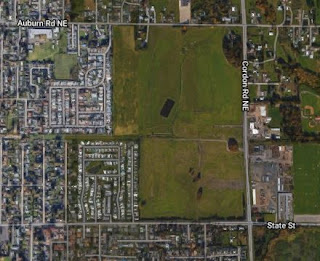 It's had a winding road and long history.

You might remember an early concept from the annexation back in 2010.

In 2016 water was an issue, and a commenter said


The issue that is concerning neighbors is actually the drainage from this property. Since it was used for agriculture for decades we know that insecticides and other chemicals were used. That contamination is likely still in the area and a creek runs through this property. Neighbors worry that it might be leaching into the creek. They also worry that digging on the property could also disturb the contamination and it will also go into the creek.

And earlier this year, from the same commenter, who has been following the project:


There was a proposal to build a large Planned Unit Development of over 800 row houses on more than 100 acres at the old Pictsweet property. Well, the plans have changed dramatically. Now the plan is not to build townhouses on skinny lots, but a more traditional single family houses on 3400 to 4500 square foot lots. Total number is down to 659 houses with a density of about 8 units per acre.

So after a few iterations of revision and adjustment, there is a firmer concept at the Planning Commission:


An application for a 695-unit Planned Unit Development and Subdivision to be completed in six phases, a Minor Comprehensive Plan Map Amendment and Zone Change from CR (Retail Commercial) to RM-II (Multi-Family Residential) for approximately 2.11 acres, and from IP (Industrial Park) to RS (Single Family Residential) for approximately 3.25 acres, and a Class 2 Adjustment to reduce the amount of required off-street parking spaces for the 36-unit multi-family portion of the PUD from 77 spaces (2.14 per unit) to 64 spaces (1.77 spaces per unit). 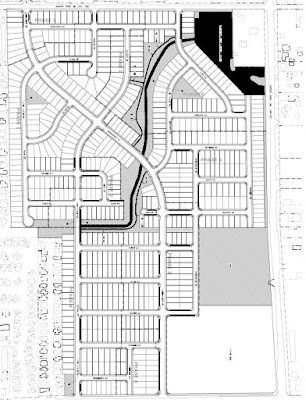 Maybe when the Staff Report comes out, there will be more information on the shift away from row houses and "missing middle" forms. On Cordon Road, the site is far away from things, and would be very auto-dependent. At the corner of Cordon and State a commercial pod is proposed, so some basic kinds of errands might be walkable and bikeable here. But with the northern edge of the project on Auburn, the Center Street bus is a few blocks away, and the State Street bus runs only every 30 minutes. It has a kind of basic bus service, but not exactly robust bus service.

So it's not obvious that higher density forms were well-suited here.

But more people might also have created the demand for more frequent bus service.

The street grid looks ok. Two main north-south streets will create connections, and one of them can be striped with a bike lane. The Staff Report will probably have more detail on this.

At State Street, the new Cougar Street is offset with a jog to the existing Couger Street segment south of State Street, which deadends there; to the north, inside of the development, Cougar also deadends. So Greencrest, which swoops in order to connect with other through streets, is probably the collector that will have the bike lanes.

The Geer Line is just empty open space, with a path for only a short portion of it, and this looks like a missed opportunity. Though it may have a different owner, as well. The Staff Report will probably clarify this also.

On a first glance, this neither looks wonderful nor terrible. As a middling and ordinary proposal it may not merit a great deal of comment. When the Staff Report comes out there will likely be more to say, however.

The Staff Report is out, and the most notable thing about it is just the sheer quantity of conditions that staff propose the Commission adopt as part of the recommended approval.

There are 56 proposed conditions. These may at least partially be a sign of a suboptimal development out on the edges of the city. But they also recognize that there are some tricky elements in play, and maybe this never was going to be a simple matter even in the most optimistic of proposed developments.

Contamination might very well be an issue, for example. Alas, the Staff Report does not directly address this and instead appeals to a procedural excluse: We have a certificate in hand from DEQ that says "no problem." (I just want to read a Staff Report that says, "While we have approval from this agency, questions remain and we recommend further investigation.")


On transportation things, you'll notice that proposed condition number 55, which calls for a segment of multi-use path along Cordon Road. That'll likely be an orphaned segment for a while, however, disconnected from any other segments.

Significantly, that condition also calls for east-west sidewalk connections between Panther Street and the MUP at 600 feet intervals. There's not a lot of external connectivity on the east and west boundaries of the project. Connections from the east and west are mainly along busy roads, Auburn and State Streets.

A rails-to-trails type conversion along the Geer Line ought to provide an east-west connection right through the middle of the project, but ownership appears to be a mess.

This is just one of the City's great missed opportunities.

A more minor missed opportunity might be Cherriots', as they declined to offer comment on the project.

Cherriots should consider offering more detailed comment to the City on developments like this, with discussion of current level of service and expected future levels of service. Are projects like this consistent with Cherriots' planning? Do they help or hinder total VMT and greenhouse gas reductions in the metropolitan area?

The Staff Report confirms that Greencrest is the main street through the development.

Greencrest connects with State Street farther east and nearer to Cordon than the high-level plan in the TSP calls for (see the bike lane map clip above), and so the City asks for a TSP amendment:


The applicant’s proposal shows the extension of (future) Greencrest Street NE, designated a Collector B in the Salem TSP, intersecting with State Street in an alignment that does not conform with the existing Salem TSP. The proposed intersection aligns with Oakmont Court SE, more than 600 feet east of the designed transportation system, therefore a TSP Amendment is required. As of this writing, the applicant has applied for a TSP Amendment, however approval has not yet been obtained. Prior to commencement of work in Phase 1, the applicant shall obtain City Council approval for an amendment to the Salem TSP to modify the alignment of (future) Greencrest Street NE.

The proposed alignment of Cougar Street was more in line with the TSP's expectation for a Collector Street. As proposed, Cougar also would have an offset at the intersection with State Street, and the City wants it in line with the street on the south side of State.

Maybe there will be more to say later, as any decision seems likely to be appealed.
Posted by Salem Breakfast on Bikes at 6:00 PM

Not at all related to the development proposal, but interesting nonetheless as recent Salem history, is this 2001 piece in a Breitenbush Hot Springs magazine by the Salem Mayor at the time, Mike Swain.

"If It Smells Like Hell, It’s Probably Pictsweet - The Mayor of Salem Speaks Out About Human Rights on the Home Front"

In a more traditional news story, Portland Business Journal writes that the plant closed in the fall of 2001:

"In March 2001, Northwest Treeplanters and Farmworkers United, also known as its Spanish acronym PCUN, organized farm workers and launched a boycott against Pictsweet on the basis of poor labor conditions.

Pictsweet was fined a total of $7,500 for 13 separate violations of workplace safety in May 2001.

Pictsweet officials maintain that union pressures did not play a role in the decision to close the Salem farm."

This history of the site should not be lost.

Updated with link to Staff Report and a few comments on it. Staff recommends approval, but with many conditions.

There is a seasonal stream and a pond on this land. Is anything being done to protect them?

From the Staff Report incorporated into the final Land Use Decision:

"The riparian area along the West Fork Little Pudding River will be left as open space for the Planned Unit Development, the area will include walking paths and benches for active and passive recreation. No native vegetation or trees may be removed from the riparian area with the proposed development, the applicant is encouraged to remove invasive species and replant or restore the creek area with native plants and trees."

At the NE corner, where Auburn and Cordon meet, there will be a stormwater detention basin.

These provisions may or may not meet your notion of "protecting" the stream and pond.