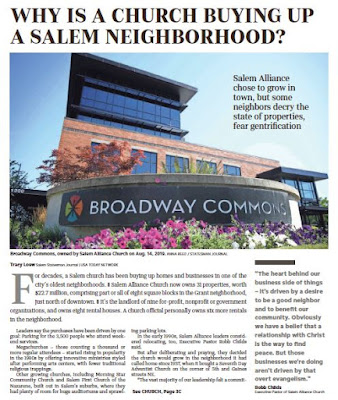 The SJ usually publishes things online in advance of the stories hitting print - "digital first," goes the slogan. This morning there is a fascinating piece in the paper, but not yet online.

It's a long piece on the property Salem Alliance Church owns and has recently purchased in the Grant neighborhood.

It touches on church's stated purpose of managing parking, but it also indirectly looks at the property as an investment strategy, at gentrification and potentials for displacement, at the scope of property off the tax rolls and the loss of revenue to the City and other entities, and just so many other themes. It was prompted, obviously, by the debate over the temporary Library site.

(The church is also landlord for the bike shop Northwest Hub.)

We need more of this kind of story. The swaths of property owned by institutions or large private entities and the interests of their owners together profoundly shape neighborhoods and the whole of the city. These are forces that direct policy, but which rarely do so in overt, explicit ways. They operate silently, in back rooms, unspoken. These are subterranean currents that too often are invisible, and the citizens then wonder why things are the way they are.

It's a great article, and you should read it. 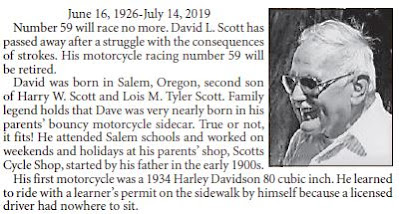 Also in the paper is a note about a life well lived.

David Scott was the son of Harry Scott, whom we know as the founder and namesake of Scott's Cycle.

The piece is published online today, and it's worth reading in full.

Here's another clip that really dovetails with Susann's comment below. What is the emphasis on housing for cars relative to housing for people? Tying "servanthood" to parking seems like it might be a kind of of idolatry and is something that deserves more thought. And why is pointing out that "the streets were for public parking" a bad thing?

I know the church has the clinic and does things for and serves people in need. But the way we treat parking elevates it way too high, and our rhetoric and attitudes are distorted. We need a different moral framework around mobility.

Regarding the lack of an online Statesman Journal story, here's what I said in a blog post I wrote tonight.
--------------
Today the Statesman Journal ran a lengthy story about how the Salem Alliance Church has been buying up a lot of property surrounding its church, which includes the Capital Press building that will house a temporary public library.

Nothing. I emailed Tracy Loew and her colleague Jonathan Bach, asking for a link to the online story. No response. It sure looks like the Statesman Journal doesn't want this story to be accessible online via Google or Google News. Which is too bad, since this part of the story calls out for sharing.
-------------------
Today the church considers the neighborhood, including its schools, part of its ministry.

As it's grown, the church has faced criticism.

They complain that some of Salem Alliance's properties are dilapidated, boarded up and targets for crime. Conversely, they worry about neighborhood gentrification.

And they object to mixing religion with business and city affairs.

The latter came to a boil last month when the city of Salem leased the former Capital Press building, which the church bought a few months ago, to house its public library while the library building is renovated.

Critics say members of the LGBTQ community, or others uncomfortable with conservative evangelical religion, won't feel welcome in the church-owned building.

It is kind of amazing and kind of shocking when you see all the property that the Salem Alliance Church has accumulated in Grant Neighborhood. As Sam Skillern who is chair of that NA points out, they have been changing the character of the area. Mostly people think for the good. But will the future hold more good or just more parking?

I too am a chairperson of a neighborhood association that has been impacted a great deal by churches. ELNA has a large LDS church on 45th Street and then at the other end, less than a mile away is another large church complex that was the former Salem Christian Center but a few years ago was acquired by the Blanchet Foundation and turned into the East Salem Community Center. The Catholic Church holds several Spanish masses there each Sunday and the Salem School District uses 12 classrooms for pre-school, along with a number of social service providers use the office space.

Scattered around the area are multiple small churches and a few medium size churches and of course Salem Academy that is church owned and Blanchet School that is owned by the Catholic community. As I write this I realize I should count the number, but my estimate is that it is about 20% of the land mass of the area. A big portion of which is in parking lots.

The impact is that we have a lot of land that is tax exempt and we have a lot of area that is not being well utilized for housing. The parking lots add to the impervious surface area that increases not only run off to local creeks and storm water system, but adds pollution from the cars who park in the lots.

To us it is kind of normal to see all this vacant space as it has grown up with us, but when you look at it as a whole it is not a good use of a resource, i.e. land.

When you think of all the unhoused people who live on our streets, I am tempted to wonder what the good people who go to those churches to worship one day a week are thinking about being 'a good shepherd' means.

I recall when Salem Alliance Church expanded and the uproar that it caused in the neighborhood. I wonder if it will resurface. In a way I hope so, because we need to think long and hard about how churches are shaping our community....for good and for ill.

(Added second clip on parking and the rhetoric of servanthood.)