Hit and Run Sentencing Shows our Autoism and Disregard for Jaydriving 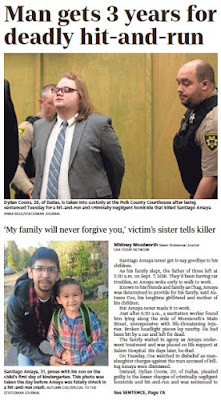 Today's front page has long piece about the sentencing in a hit and run and the grief still for the survivors.

The piece also shows so much that is wrong with our autoism. The sentence itself, a plea bargain down from manslaughter to criminally negligent homicide and hit-and-run, seems light.

But it's also interesting the way our culture of autoism regards careless driving as no big deal. The driver Coons had at least two documented instances of serious jaydriving, but the court would not see them as relevant:


[A] woman told police a driver speeding and driving halfway in an oncoming lane almost hit her as she picked her child up from their school bus stop. Concerned because of the other children in the area and because the driver looked like a teen, she posted on a Facebook group for the Dallas community and asked people to help her contact the teen’s parents.

Coons allegedly sent her a message saying he was the teen and asking her take the post down. He said he was normally a safe driver, but he was late for school....

[Separately in another instance] Coons was cited for reckless driving after he crashed his car while “cutting cookies” around a light pole in a parking lot....

[Judge] Caso ruled that the prior incidents were not relevant to whether Coons knew of the dangers of being tired or falling asleep while driving. But he said the incidents would be admissable if Coons made statements about never being in trouble or having driving complaints.

Maybe a legal analyst will be able to say that the judge was more constrained here on admitting the other instances of jaydriving, but it looks like evidence instead that we regard these as juvenile hi-jinks and as no big deal, not worth considering as evidence of a pattern of dangerous driving. They are normal. As such they were not anything that merited intervention to prevent a greater harm, as it turned out Coons's jaydriving later inflicted.

It may be also that the lack of robust transit made it difficult or impossible for Coons to go places if he had trouble with drowsiness from sleep apnea. By not having a good transportation system with many options, we give people few alternatives to driving when they should not be driving. We make it hard for people to make good decisions sometimes.

There are multiple ways that our autoism aggravates the cascading chain of bad choices and makes catastrophe more likely. And one reason why the sentence here seems light is because of the way we make light of other, non-lethal, instances of jaydriving. Cars are dangerous, and we don't consider this sufficiently.
Posted by Salem Breakfast on Bikes at 8:30 AM

If you want to kill someone without cause and don’t have a badge, be sure to do it behind a steering wheel..