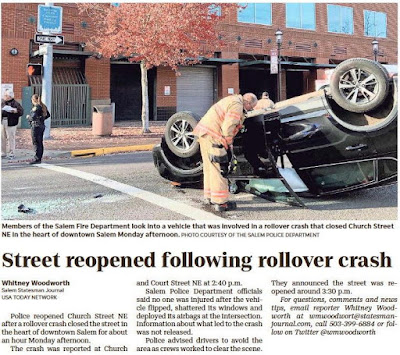 Though it seems no one was seriously injured in Monday's crash on Church Street near the transit center, the story in yesterday's paper illustrates so much about our autoism and what is wrong with it.

The story's main frame is on a kind of congestion: "Police reopened Church Street...after a rollover crash closed the street in the heart of downtown..."

While the story includes details that "the vehicle flipped, shattered its windows and deployed its airbags," there is no mention of speed. "Information about what led to the crash was not released." But it is highly unlikely that lawful travel at the posted speed led to this, and the ostensibly scrupulous sticking to facts spoken or verified in the police statement leads to a silence that contributes to our normalization of jaydriving and speeding.

There's also no driver. An "anthropologist from Mars" might reasonably suppose this was one of them new-fangled robot cars without a driver.

While it may not be possible to prove that driver error was involved, silence on that is exculpatory and works against an objective reporting of truth. Altogether this is another place in public discourse where our current notions of "balance" and "neutrality" lead to untruth or misapprehension.

Oopsie! Here's this strange piece of street furniture that tumbled over. Looks like we had a little accident here. Nothing to see, move along.

Back in 2011 on the south side of the intersection there was a different rollover crash. Especially considering that there is a buffered bike lane here, it may be that excessive speed is more than a little bit of a problem. 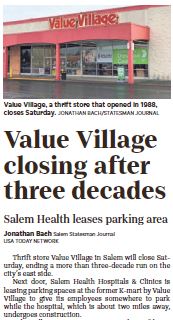 There's a story in today's paper about the Hospital taking over the Value Village parking lot lease on 25th and Mission.

It's a temporary move for employee parking during construction and the Hospital will apparently run a shuttle down Mission Street.

Hopefully the Hospital will use this to evaluate parking policy and the proper alignment of incentives for healthy transportation and a healthy city.

There might also be possibilities for working with State Offices and other downtown employers. Could this restart demand for the 15x shuttle from the State Motor Pool area, a route that was cancelled a couple of years ago?

This is an opportunity to talk more about parking, its costs, and ways we might meet transportation demand other than subsidizing free parking for drive-alone trips.

Less directly relevant were a couple of notes on the proposal for a Diverging Diamond interchange on I-5 at Aurora and on high-speed rail between Portland and Seattle (picked up off OPB). 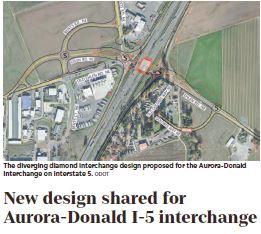 And I hope the flooding in Venice and that city's prospects are in mind a little as related to warming and climate disruption.

At a recent meeting I met a man who works for Salem Health and his job is to do some sort of work around city planning and health issues. He talked about how Salem Comprehensive Plan lacks polices that would encourage healthy neighborhoods. It stimulated quite a good discussion, but staff didn't seem to take much notice. I was pleased that the Hospital has such a person on staff, but did not have time to learn how they use this person in their design of facilities etc.

One thing that was brought up is how we put the highest density of housing next to major streets and along I-5 and Kuebler etc where there is more pollution and particulate that cause cancer and other illnesses. Makes no sense from a people point of view. It is driven by the desire to increase mass transit, but it is counter productive from a health point of view. Walkability (and bike riding) is desirable, but it you have to do it next to heavy trafficked streets it increases your cardiac risks too.

Not sure we are making any progress in Our Salem yet on such important issues. Old ideas die hard.

Huh. At the former Blind School, and especially with Howard Hall, there were any number of policies for "healthy neighborhoods" that the Hospital could have embraced. Our Comp Plan has more policy language for that than we might suppose. The problem has been getting actors like the Hospital to comply and for the City to enact binding code, not merely discretionary plan language. Altogether, not sure the Hospital is acting in good faith here.

If we don't have sufficient numbers of customers for frequent service transit, how are we supposed to reduce trips?

While it may not be equitable to cluster housing by I-5 and access-controlled parkways, we should have more housing near major and minor arterials, even collectors, so that transit works better and people can reduce car trips.

We should not space out homes in order to preserve car use and convenience.