State Transportation Strategy on Carbon Pollution and Climate at the OTC 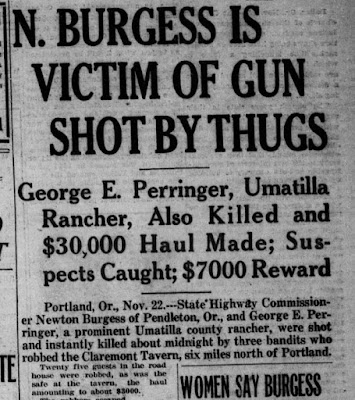 Exactly 100 years ago, the headline was "Highway Commissioner Burgess Killed by Highwaymen at Claremont Tavern." About Jasper Newton Burgess there isn't much online, and this short biographical note in Carey's History of Oregon seems to be about it.

On that cheery note, we observe that the Oregon Transportation Commission, the successor to the Highway Commission, meets at Spirit Mountain Casino in Grand Ronde today and tomorrow, the 21st and 22nd. They have a number of interesting items on the agenda.

Of greatest interest is the start of the formal response to Governor Brown's letter asking for more action on greenhouse gas and climate.

I don't know what really is a realistic expectation for this update and the start of a response, but especially in light of the other topics on the agenda it is rather disappointing.

The presentation, like all of them, show the chasm between our current trend and the 2050 goals adopted in the 2013 plan. It does not highlight the problem already for 2020.

But in the "progress report," only vehicles and fuels are broken out with a more detailed assessment. (It also is nearly certain to overstate any effectiveness of "system operations," which are much more likely to induce more travel than reduce emissions.)

But as it happens, on the OTC agenda that very same day there is also a significant update and presentation on "Plan Implementation Efforts." It covers:
In the section on the biking and walking plan, it's all hunky-dory.

This pattern repeats for the other plans.

But the two presentations, on climate action and on plan implementation, aren't talking to each other, don't inform one another. The STS should drill into the Bicycle and Pedestrian Plan and ask if it is actually contributing to the 2050 goal.

These conversations and analyses matter to each other! And progress on the Bike Plan should be measured by progress on the Climate Plan in addition to whatever other measures ODOT wants to use, otherwise it all is just empty blather.

As it is, we get a sortof totalitarian message about "One ODOT," but the evidence plainly shows fragmentation, silos, and a lack of coordination.

There could be more to say, I suppose, but the slide decks aren't very impressive. Maybe the words in person will be better, but this looks like bureaucratic and soporific BS more than hard analysis and calls to action and transformation.

And really, ODOT doesn't see a need for transformation, so this shouldn't be surprising. Had they wanted transformation, they wouldn't have picked the leader of the failed CRC to be the new agency head, and would have picked one of the other two, external candidates. The presentations consequently are designed to be reassuring rather than unsettling or critical. "Stay the course, we're doing just fine!"

Also on the agenda is a report on the transit funding thing awkwardly called "Special Transportation Fund (STF) and the Statewide Transportation Improvement Fund (STIF)" and on interstate bike routes, like the coast highway route.
Posted by Salem Breakfast on Bikes at 5:00 PM

Back in the 1990s I served on the SKATS CAC and had my eyes opened about how all the 'planning' is "it all is just empty blather."


They had no interest in reducing pollution because they rationalized that it wouldn't happen anyway, so why try?

They also said, why meet goals if there is no penalty for not meeting them?

And lastly, while they are required to have 'citizen outreach' the plan for doing it is/was/ will be laughable. People care about these issues, thus probably why the outreach is so poor. They don't want to do anything really.

At least that was what I came away with.....

Seeing that it is no different at the State level is not encouraging for our future.

In a note this week, "Climate failure and denial at the Oregon Department of Transportation," City Observatory seems to concur that the STS and ODOT's supposed implementation of it is "bureaucratic and soporific BS."