On the front page this week was a national story about problems with the yellow bus system. 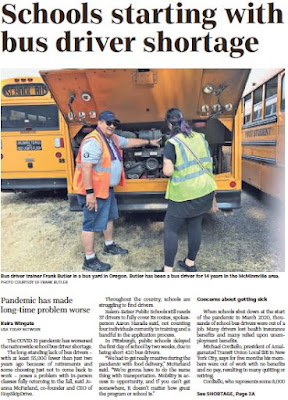 The story wasn't specifically focused on 24J, but they are not immune to the trends, and we've already seen Cherriots announce some service reductions at the very time time they are trying to roll out new Sunday service. There's also a story in Eugene Weekly about Lane Transit having difficulty recruiting new drivers and retaining existing drivers. There are multiple factors in play, some very immediate, others more structural and longer-term.

The problems are a small crisis that also represent an opportunity.

We should rethink the redundancy in yellow bus service and transit service. If Cherriots and the School District weren't both running bus systems, we might be able to reallocate resources away from the duplication and actually serve more people in total. Maybe elementary schools still need some kind of yellow bus service, but students in middle school and high school could use Cherriots for many trips. We should think about shifting funding to a universal youth pass and to enhanced routes and frequency for bus lines near schools or other destinations serving youth.

In the City Manager's update from August 17th, there was a small bit about the Grant Neighborhood.

I have signed an agreement for a reconnaissance-level survey and National Registry of Historic Places Eligibility update for the Grant Neighborhood. The consultant will resurvey 120 parcels and update the existing state database. A report will be produced for the Historic Landmarks Commission.

This is likely a response to the German Baptist Church project and the zoning fight there as well as changes envisioned in Our Salem.

Increasingly, historic designation is a tool for exclusionary ends and a way to avoid change. Several neighborhoods in Portland have sought this end-run around new zoning. From Willamette Week in 2017 on the Laurelhurst neighborhood in Portland:

Critics charge that by trying to save Laurelhurst from the wrecking ball, its residents are in fact erecting a wall to keep out newcomers, renters and people of modest means—making Laurelhurst an oasis of money in the midst of a housing shortage.

"The consequence [of seeking a historic designation] is pretty clear: It isolates those neighborhoods from shared responsibilities to be a more welcoming community and to accommodate the housing that's needed," Liberty says.

The details are not always the same from neighborhood to neighborhood, and city to city, and what might be the case in Laurelhurst is not exactly the situation in Grant, but as we change direct zoning laws in explicit ways to mitigate our housing crisis, using the indirect zoning of historic districts for exclusionary ends is increasingly attractive - and ostensibly a little virtuous even, because "history." But the real history of a city is change, not stasis.

This will be something to watch in Grant and other close-in neighborhoods. Because they are embedded in the older streetcar grid, and are our most walkable neighborhoods, they offer the greatest proximity to urban goods, and we should want to share these goods more widely.

For more on tensions with our Historic Preservation framework

And background on history of Salem zoning

And as trivia on our autoism, here's a note from 100 years ago on building more housing for cars than housing for people. "Last year [in 1920] we housed 20 per cent more autos than we did families....We are going to keep the paint bright on [Tin] Lizzie even if the baby has to sleep with the dog."