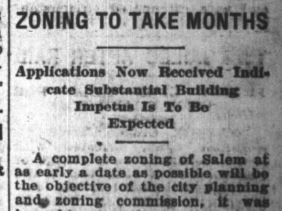 In July 1925 Council adopted the ordinance establishing the Planning and Zoning Commission and a zoning law, which was modeled after what had just been adopted in Portland a year previously, but was being appealed and litigated.

In November of 1925 the City appointed the first Commissioners. They included the State Librarian, Cornelia Marvin, who was also an advocate for eugenics; and State Bridge Engineer Conde McCullough. So right there we have connections with race and transportation on the Planning and Zoning Commission.

It seems impossible that it is a coincidence that the 1926 Polk Directory could say "There is absolutely no foreign element in Salem." The paragraph is written so the most reasonable interpretation is that "negros," including those with many generations here, are a "foreign element." Earlier and later directories omitted this paragraph, so something was definitely in the air at this time.

I have not seen a history here of zoning and the Planning Commission. Maybe one exists. At the moment, I want to sketch out some of that history from the mid-1920s. Through newspaper clippings we will trace out some of that history of zoning and its exclusionary intent.* The larger cultural matrix of exclusionary interests will be clear also. I am not going to argue that zoning is only a tool for exclusion. But exclusionary ends are an important ingredient in the early development of zoning here, and we should take care to center this in our understanding of the way zoning functions. We have sidestepped some of these questions in our contemporary language about aesthetics, the ways buildings and neighborhoods look, about allowable uses in them, and in our rhetoric of "neighborhood character." As we consider new zoning through Our Salem, more specifically consider how we implement more restrictive or less restrictive new standards for missing middle housing, and consider the exigencies of a Climate Action Plan, the use and misuse of early zoning should be on our minds also.

The language used in defending reasons for the zoning on the surface appears telling.

A little later in November of 1925 the paper said, using the term "invaded," that


The first business the commission is planning is that of zoning the city so that certain residential sections will be assured that they will not be invaded with commercial enterprises.

In January of 1926, an ordinance went before Council.


The purpose of this ordinance is to halt the promiscuous construction of buildings until the zoning commission can zone the city.

Here the interesting word is "promiscuous." Words like "invasion" and "promiscuous" are not innocent and the rhetoric assumes a pattern.

And a little later in January:


First action of the city zoning commission was made last night in the form of a recommendation to the council that the petition of H. C. Joy to erect a laundry in the Nob Hill district be denied....Reason was given that the vicinity is a residence district....

In December of that year a different proposal for a laundry ran into trouble and one of the reasons explicitly invoked ethnicity: neighbors did not want a "little Italy." Immigrant or non-Anglo labor associated with laundries is almost certainly the subtext here. This is consistent with the coded language about "invasion" and "promiscuity." (See previous notes on the Capital City Laundry, including an ad calling out "white help.")

Again back in January of 1926, Council denied an application for a new junk yard, and we recognize the themes today:


A remonstrance signed by practically all of the residents in the neighborhood was sustained by the council, and [H.] Steinboch's application [for a junk yard at Front and Columbia] was denied. A resident of the district, who was on hand for the meeting, declared that there are several good houses in the neighborhood, and that several more are to be built soon. He said that the residents did not wish to have the value of their property reduced by the presence of a junk yard.

Jewish merchants were often associated with junk yards, and it is at least an open question whether there was an ethnic subtext here also. (See also the origins of Saffron Supply at Salem History Matters.)

Then in February, another matter appears: Signs and billboards.

So before the Planning and Zoning Commission has even created any proposals for zoning maps, the first three big issues are:
It appears significant that in laundries and junk yards, it is light industry associated with immigrants, and not heavy industry associated with established capital, that is first marked as problematic. Maybe this will turn out to be a red herring, or you will have a different reading of it.

Overall there is throughout these early notices what looks like a matrix of a desire for homogeneous ethnicity and language signalling that ethnicity was a subtext for policy and planning decisions. While there is no "smoking gun" on exclusionary intent, there is a lot of adjacent language and other "second hand" smoke. Most importantly, the zoning and planning concepts were developed during a period when exclusionary impulses were primary in popular culture and politics. It is impossible to regard these first planning and zoning schemes as wholly neutral.

We will next look at the way the Commission was proposed to be funded and its further activities, especially the mapping and classification.

* You might have registered back earlier this fall that the City of Portland had started a serious historical reckoning with the racialized subtexts and more explicit aims for planning and zoning. In September they published a pamphlet, "Historical Context of Racist Planning: A History of How Planning Segregated Portland."

For a wider perspective, a couple of years ago Richard Rothstein's book, "The Color of Law: A Forgotten History of How Our Government Segregated America," received a lot of notice. I have not read it, but I expect that we will see in Salem themes and actions Rothstein finds in larger metros, but shaped by Salem's smaller size and already reduced diversity.

“The Color of Law” is an excellent book and really well-written and accessible even to non-lawyers. It’s really a book-length demolition of the lately popular (with Federalist Society lawyers) idea that racial segregation can’t be addressed with government because it wasn’t state action to violate people’s rights, it was simply “the magic of the marketplace.” In other words, pretending that all the mechanisms that government provided for racial segregation to be built into our places should be overlooked, and as long as you take down the “Colored Not Welcome” signs, all is well.

What is really overlooked (now that Color of Law brought some of this into the light) is how much of our segregated society is simply the result of the head-start whites got in 250 years + 150 years of slavery followed by systematic racial discrimination and outright slavery in all but name for many African-Americans.

The thing that I keep running into is how freaking valuable the “step up in basis” at death is — since the modern income tax in 1916, the biggest “hidden in plain sight” factor in wealth transmission (and racially discriminatory results) is that your heirs take property but their “basis” is its “stepped up” basis (date of death value). So that land you inherited from your parents that was inherited from their parents and that your kids will inherit, when you decide to sell it, you only pay taxes on the value in excess of its value on the date you inherited it. (If at all, given how the estate tax has been essentially repealed for all but plutocrat fortunes).

When you look at a place like Oregon, explicitly racist in Constitution from day 1, there’s probably a ton of land that has NEVER left the original “Pioneer” families — meaning that there is this tremendous store of wealth that provides a way to borrow and invest when investment is needed, a store of wealth that has never been taxed even as it has grown for centuries. And it’s going to be 99.99% white.

That’s pretty much the case throughout the US - slavery was abolished but the advantages that accrued to being white continue to propagate through the generations.