Agate Beach and the Bush-Bloch Connection: Little Bluffs Built in 1917 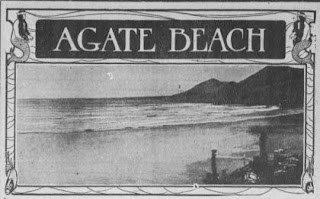 The paper today has a nice travel feature on hiking from Beverly Beach, over Yaquina Head, down to Newport, and across the Yaquina Bay Bridge.

It briefly mentions Agate Beach, and by coincidence a friend of the blog who happened to be vacationing in Newport separately was alert to a Salem connection.

Music fans will likely know about composer Ernest Bloch and his connection with the Oregon Coast.

But Bloch's history might have overshadowed an earlier relation to Salem history. What we know as "The Ernest Bloch House," a large beach cottage on the National Register of Historic Places at Agate Beach, was in fact first a summer residence for the descendants of Asahel Bush.

From the National Register Nomination:

The Ernest Bloch House...in the Agate Beach district within the city limits of Newport...was the last residence where...Ernest Bloch lived and the only property Bloch ever owned. Although initially built in 1914 as a coastal retreat for the locally well-known Asahel Bush III family...Bloch would later purchase the house and property in 1941, remaining there until his death in 1959. While living at Agate Beach, Bloch undertook over twenty-five musical works, composing both in the main room of the house and in the upper floor of the garage-studio. In addition, Bloch used the lower floor of the garage-studio as a lapidary, and often walked a trail that wound down to Agate Beach.

If I am reading things right, it is the grandson, Asahel Bush IV, and not Asahel Bush III, the son, who was generally known as A. N. Bush, who constructed the house. Especially in the early 20th century, the multiple generations named Asahel Bush make it all very confusing for the non-specialist. The patriarch here in Salem, even, was Asahel Bush II, already a copy of an original. The National Register Nomination calls him "senior," but I think he was "junior" or "the second." Clearest might be great-grandson "Ace," Asahel Bush V who was a war correspondent and died in World War II. If you back into the family tree from him, the one we mostly talk about is Asahel II/Jr., not a "senior." It's hard to be certain on it all, though.

As for the house, the National Register Nomination as well as the Oregon Encyclopedia article settles on a circa 1914 date, but we can date it more exactly to the summer of 1917.

Perhaps wrongly, but I think these notes would refer to Mr. and Mrs. A. N. Bush if they were about the son rather than grandson.

The cottage seems also to have a name, "Little Bluffs." (Bloch does not appear to have maintained that name, however.)

A few days after these Oregonian feature photos in 1917, the paper here mentioned that the season was coming to a close, and mentioned the Frederic Thielsen family and T. A. Livesly family as having cottages at Agate Beach in addition to the Bushes. "Colonel" Hofer, publisher of the afternoon paper for a while, had been promoting Agate Beach through much of the decade.

Several coastal communities had ties to Salem. Daniel Fry had a place at Neskowin and William S. Walton developed it more intensely; Elizabeth Lord had a place at Seal Rock; and Bert Hoover's uncle, Dr. Minthorn, involved in relocating the Indian School to Chemawa and in the Oregon Land Company, had a place at Nye Beach and a sanitarium. It might be interesting some time to try to examine the social networks from Salem as they realigned at the coast in "summer colonies." There might be some patterns to discern. But that will be for another time.

The stretch of coast between Cascade Head and Newport is pretty much due east of Salem, of course, so it is logical that Salemites would build cottages and summer there. The railroad to Yaquina City made Newport especially convenient in the bicycle age and earliest part of the auto age before the roads were hard-paved consistently and before the coast highway was complete with all the bridges of Conde McCullough. Even apart from the logistics of resource extraction like timber or fishing, there is a lot of transportation history in the history of beach towns.