As Development for the Meyer Farm is Debated, History Remains to be Investigated

At Council on Monday is an information item on the approval for the Meyer Farm development. It seems sure to be appealed, and that process may go on for a while.

A little buried in the packet on the approval is a short history report! It clarifies some matters, but leaves others obscure.

No matter what is the final disposition on any housing development at Meyer Farm, and as it goes through any appeal there will be more to say on the proposed housing development, its settlement-era history is very much worth more investigation, and a number of details remain murky.

The Status of a Waldo DLC Still Unclear

In the report is a clip from a survey map labeled from August 1855 with the square of Joseph Waldo's land outlined in black.

But this map does not appear to be a faithful version of the survey map from August of 1855.

That map survives as a 1919 copy. And it is considerably sparer than the map that the report labels as from August of 1855. (Black outline area is highlighted in yellow.)


In previous posts, I had got my maps from the University of Oregon's collection, and the report points to a different source hosted by the BLM. Its version of the August 1855 map is this 1919 copy, which appears to be the same one in the UO collection.


So the map they keep identifying as from August, 1855 is very likely something from much later that had been continuously updated over the years. The base map might have been the original or an early copy of that map from August 1855, but it's been added to a lot. (And they don't, as far as I can tell, give a citation for its source, preferring to label everything as August, 1855. It would be helpful to have a citation to this particular instance of the map with a more complete description and label.)

It in fact looks more like this BLM map from 2000/2006, which is clearly a historical compilation. 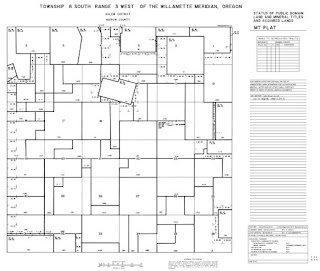 So while there is a name "Waldo" to attach to this parcel, it's still not yet clear how much he actually lived there and when the word "Waldo" was added to the map shown in the report.

In the report they do acknowledge the belatedness of the patent, but only in outline. According to the report, Waldo "staked" his claim in 1847, then it is described as "Waldo’s 1852 Donation Land Claim," which was divided into "eight, nearly equal lots," shaped in an L around Abijah Cary's DLC. Then a 20 year "backlog" and delay at Oregon City before the patent issued in 1873. Is that really plausible? This timeline deserves more detailed discussion, as it is very unclear.

What about that Barn?

The notion of an intact, or largely intact, barn from 1854 is tantalizing. But as it is mentioned in the report, its provenance and origin is murky and inconclusive: "The neighborhood [south of Salem city, associated with Fabritus Smith] raised more than 12 barns between 1854 and 1855, including, we might conclude from Smith's diary also, the 1854 barn...." [italics added]

The footnote points not to the diary, but to a 1994 Master's thesis on Fabritus Smith, "The Impact of the Donation Land Law Upon the Development of Oregon." It mentions Joseph Waldo only three times, and has nothing about Waldo's barn. The thesis furnishes nearly the exact quote cited in the Meyer Farm report: "During 1854 and 1855, he [Fabritus Smith] was involved in twelve different barn raisings for various neighbors." The names of those neighbors is not listed, and even if it reasonable to speculate that Waldo was one of them, it remains speculation.

So what is the evidence that this barn was Waldo's and dates to 1854? You might recall that "the large barn of Joseph Waldo...was destroyed by fire" in 1865.

Maybe the barn really is that old, but the public documentation does not seem to be sufficient to establish that. This claim also deserves more detailed discussion.

The report says "Joseph Waldo's biography is incomplete...." Indeed. They mention Lucian Fullerton, who may be the Fullerton who had a half-interest in a barn that burned down.

But there is no mention of probable daughter America Waldo and any slaves Waldo might have brought with him. We saw that in 1930 the Bitsman asserted Tom Davis, who had just died in Vancouver, had been a slave brought here by Joseph Waldo, and who did not find freedom until 1863. That suggests Waldo kept slaves as slaves here in Oregon, a free state, even after statehood. (Descendents had traced America's parentage to Daniel Waldo, but a timeline with Joseph works better. This may not be definitive, but the better evidence appears to point to Joseph, not to Daniel.)

America's wedding is a significant moment here, as Rev. Obed Dickinson officiated, and with racist invective Asahel Bush privately agitated against the wedding and against Dickinson, contributing to his ouster a few years later. It is a central moment in the story of the Waldo family here and in the story of Asahel Bush. (See Egbert Oliver's 1991 article, "Obed Dickinson and the 'Negro Question' in Salem," Oregon Historical Quarterly, vol. 92, no.1. It needs to be updated and more attention given to Bush, but it's what we have right now.)

The Meyer Farm report prefers the benign image of "Uncle Joe" as expressed in the family history and lore that made its way into the newspapers and Marion County Historical Society periodicals in the early and mid-20th century. That's not necessarily wrong, but it is one-sided and shaped by the myths around the "pioneer" and settlement era, especially the second- and third-generation need to make legitimate a settlement process that was messy, often unjust, and sometimes violent. A better history, and any public history, of Joseph Waldo will want to grapple more deeply with complication and ambiguity.

And of course when Waldo "staked" his claim in 1847, the land was not empty. People lived here.

In a week what looks like a very interesting show opens at Bush Barn, "Native Salem."

The exhibition addresses the history and culture of the original Kalapuyans at Chemeketa Village, the original native peoples of what became Salem, Oregon. The exhibit images and text look at settler changes to the name and character of the town and how the Chemeketans adapted to the new American culture. Finally the exhibit documents challenges that Native peoples continue to face in the region from federal and state authorities in the recent past and present.

While the proposed housing development is debated and percolates along through any appeal process, the early settlement-era transition and history of the Meyer Farm area is fascinating and worth much more investigation as part of Salem's history.

The Morningside Neighborhood Association has given notice to the City they intend to appeal.