The story of Guidance of Youth is usually framed up as a story of provincialism and prudery. We could have had a Renoir, that story goes, a female nude but exquisite. Salemites rejected the high art, and we got Guidance instead.

The Public Art Commission meets this week on Wednesday the 10th, and on their agenda is "Formal accession of Guidance of Youth by Avard Fairbanks to the Public Collection." (The agenda says Wednesday the 13th, but that's not right.)

It is interesting to learn that the sculpture is not actually in the Public Collection. But this agenda item, more than a little buried, is something that deserves more attention. 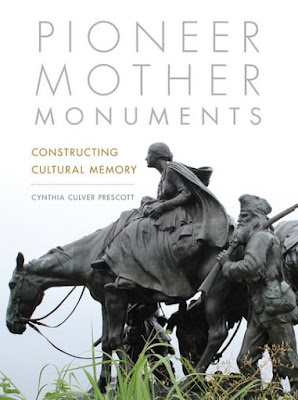 In her book, Pioneer Mother Monuments, Cynthia Culver Prescott devotes much of a chapter to Salem and to this sculpture, and highlights exclusionary themes encoded in it.

By the 1920s, white Americans had grown confident in their displacement of indigenous peoples but increasingly anxious about changing gender and sexual norms. They turned to Pioneer Mother monuments to shore up what they considered traditional values.

She asserts there is a strong ideological element, even propaganda, to the statuary, and that we should attend to this in our readings of the art.

More specifically, about the Salem statute and quoting Fairbanks himself she points to the exclusionary sentiments intended by it:

"This is a very great triumph in America....Fortunately, we have real Westerners and true Americans who still believe that our cultural heritage is well worth memorializing...." It speaks volumes that Fairbanks declared the iconic white pioneer woman as representing not only "real Westerns," whose ancestors had carried Anglo civilization westward, but also all "true Americans"....

The day after the Art Commission meets, on the 11th the Native Salem show opens at Bush Barn and is sure to offer counter-narratives that critique the ideas of "true Americans" and "real Westerners" expressed in Guidance of Youth. The timing of the Public Art Commission's proposed action is unfortunate.

Refusing to accept Guidance of Youth into the Public Collection might be overkill, but the statue may need more context and an interpretive wrapper. The obscurity of the statue right now may be a feature rather than bug, but accepting the piece into the Public Collection straight up may not be consistent with our current values as an "inclusive" city.

The Art Commission should consider taking more time, inviting actual public comment, and then crafting a public strategy and context for Guidance of Youth, as it expresses values we should no longer want uncritically to celebrate.

See previous notes on the Pioneer Myth in our public art.

Email ThisBlogThis!Share to TwitterShare to FacebookShare to Pinterest
Labels: Art in Salem, Pioneer Myth in Art

Yes. And its triumphal placement overlooking Bush's Pasture Park's lower oak grove and Pringle Creek, which previously served as a summer camp to the Kalapuya people, reinforces the message.

That's a good point about its location! Since the shrubbery grew up around it - maybe mostly rhodies and azalias, now formalized in the hillside rhodie garden - it has become obscured and hidden, its original site context a little lost, but as you point out, it was sited at the top of the hill slope looking out over the oak grove and meadow, very much a triumphalist gesture.

Thanks for underlining that.

On FB a person suggested that recent graffiti on the statue might have prompted the Public Art Commission to move more quickly.