Last week drivers on I-5 struck and killed exposed and more vulnerable users, one on bike and one on foot.

With the high speeds and long stopping distances on the Interstate under normal driving, there may have been nothing a prudent and reasonable driver could have done. Driving on the Interstate is different from driving on city streets.

So it is very difficult to know if there are any safety countermeasures to advocate. There many not be much to say there on that. I was hoping more would come out, but it has not. 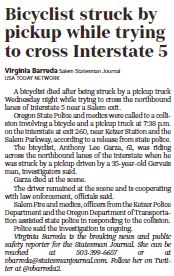 On November 10, 2021, at approximately 7:38 P.M., Oregon State Police and emergency personnel responded to a motor vehicle collision involving a bicyclist on Interstate-5 northbound at exit 260 near Salem.

A preliminary investigation revealed that a bicyclist identified as Anthony Lee Garza (61) was riding his bicycle across the northbound lanes of Interstate-5 when he was struck by a pickup truck operated by Benjamin J Miller (35) of Gervais. Miller remained at the scene and is cooperating with law enforcement.

Garza was pronounced deceased at the scene.

I-5 is unquestionably a barrier difficult to cross, and overpasses are usually busy arterials or highways with poorly maintained shoulders or uncomfortable bike lanes. They require substantial out-of-direction travel. These arrangements impose costs on people employing non-auto travel.

But why was a person on bike trying to cross on the highway surface itself rather than crossing by an under- or overpass? Garza might have been fleeing someone or something. He could have been victim or perpetrator. Nothing is clear, and the brevity of published information is not very helpful.

Still, even if he made a terrible decision, even if he was fleeing a crime he had just committed, he does not deserve death on the highway as the punishment.

On Friday, a driver killed another person. Her death is even more bewildering in the short account.

On November 12, 2021, at approximately 9:18 P.M., Oregon State Police and emergency personnel responded to a motor vehicle collision involving a pedestrian on Interstate-5 southbound near milepost 254 in Salem.

Preliminary investigation revealed a female pedestrian, who was identified as Christina June Klug (26) of Lebanon, exited her boyfriend's vehicle that was parked in the median on Interstate-5 southbound near milepost 254, walked out into the lane of travel, and was struck by a southbound vehicle operated by Maria Guzman-Coria (24) of Salem.

Klug's death may not make it into print out of a kind of tact or deep uncertainty. With the stress on "walking into traffic," the police account and online rewrite in the paper suggested it may have been suicide. But she might have been fleeing abuse also. In the attempt to stay close to the facts of the matter, the brief account obscures much also.

There is great sadness all the way around in both of these. Grief for the friends and family of the dead, and enduring sadness for drivers who, particularly if they were truly blameless and driving with great caution, must nonetheless live with having killed a person.

(This post may be updated, but at this point it seems unlikely.)