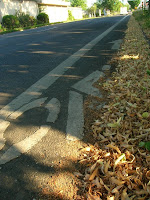 My "favorite" bike lane in the city, the one that activates the greatest cynicism, is on north Commercial at Pine street. A paving seam has whacked off the front wheel and one leg of the bike dude. The pavement marking isn't quite bisected, but with the curb allowance, the lane is effectively cut in half. It's hardly wide enough for handlebar width. 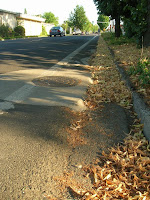 Here, at a manhole vault, you can see just how big is the discontinuity: The seam is three inches or so. It's big! Last fall's leaves remain in the depression; clearly the street sweeper can't reach them. The seam runs almost the length of a block and also runs by a storm drain. The first time I biked down this stretch of Commercial, it caught me by surprise, and I almost fell. I still have to prepare myself for it, because the lip will enforce an involuntary dismount if you don't remain on one side of it.

Bike lanes generally suffer in Salem. They are second-class. They are not well maintained and roadway engineering and design often orphans them from other bike lanes. 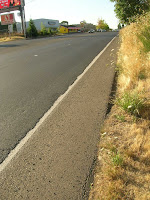 Almost at the top of the hill between Ratcliff and Vista on Commercial SE is another problem. The overgrown grassy slope cuts into an already narrow bike lane and pinches it to a handlebar width.

Debris from recent paving, gravel and sticky asphalt residue, also spins and blows from the auto travel lanes into the bike lane. The bike lane is the gutter. After the winter storms, the gravel remained for months last spring. 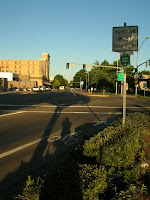 Here at Trade and Commercial SE, bicyclists on the Front street by-pass cannot to continue east on Trade. The right-hand dual-turns enforces a right turn onto Commercial for bikes. The bike lane is cut in half, at least for east-west travel. Bicyclists wanting to travel east either have to perform a dangerous merge or they have to cross three cross-walks like a pedestrian. 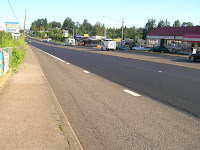 Paving and funding road repair are tricky, of course. On south Commercial, at Ratcliff, the city just applied a thin-skin fix to the road surface. Very carefully they paved to the edge of the bike lane marking. They also chose not to cover the center turn lane. Curb-to-curb asphalt would increase the paving surface by at least half, so clearly this represents a substantial cost savings. Fortunately the lip with the thin-skin is not very deep, and is less likely to catch a wheel. Still, seeing the new surface for cars and the old for bikes sends a message.

The paving on Commercial Street SE is routine maintenance where vehicular travel lanes were suffering from severe rutting and potholes. These conditions are hazardous to all traffic as drivers tend to "straddle" ruts or dodge potholes and occasionally intrude into bike lanes. These lane pulls are to simply restore the profile of the street for drainage and safe lanes.

Since the center median and the bike lanes were in good condition...the street did not qualify for nor need a complete overlay at this time. These lane pulls cost our budget only 20% to 40% compared to an overlay and last 5 to 8 years. This is interim maintenance until future funding and street deterioration qualifies this segment for a complete overlay.

As for sweeping, Hildebrandt adds, the "lanes are scheduled for sweeping either Sunday night or Monday night. We cannot sweep newly applied asphalt for a few days until the asphalt has cured."

The other part of the message is that cars are more important. Cars get shiny new duds, and bikes are left with still-servicable hand-me-downs. The movement of freight and essential services should remain critical. But the bulk of motorized travel is single-occupant vehicle travel, and these wasteful trips get rewarded.

If the city wants to promote bicycling, the city might consider the signal it is sending. The city might act more quickly to improve bicycling conditions, and be less swift to improve motoring conditions. What if bicyclists got smooth new asphalt and motorists were left with gravel and potholes? These are the conditions bicyclists experience in reverse, and they currently dissuade prospective bicyclists. Can more selective road repair be a pricing signal to discourage single-occupant vehicle trips?

In any event, whether it is in sweeping, maintenance, construction, and design, too often bike lanes are second-class citizens of the transportation infrastructure, disabled and disconnected, artificially kept from full membership in the transport economy.
Posted by Salem Breakfast on Bikes at 1:05 PM

Then there's the discussion the other day about why we can't have the bike lanes in between the curb and the row of parked cars (because the city has no way to sweep the lane) . . .

Seems like a not-impossible deal to use a golf cart with a sweeper attachment to get that done. It could certainly happen if the city cared.

The same center strip paving has recently been applied to Airport Rd between Mission and State Street, however, there are places where the bike lane is in serious disrepair and the argument that the bike lanes are in fine condition leaks out through those cracks!

There's a bike lane on Airport Rd between Mission and State?!

Thanks for the airport road info! If you see other crappy bike lanes out there, drop 'em in the comments. An inventory of facilities will be part of the TSP update, I believe, and any data we gather now will be helpful!