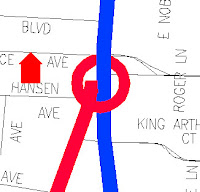 Everyone knows the junction of Commercial SE and Liberty S is difficult. The Salem bike map circles the intersection in red to highlight it as a "caution area." We all have our personal stories about close-calls, managing the traffic, and the way we figured out our routine.

But just how bad it is wasn't clear until we performed a formal bike count there last week. It was sunny, and since at least Commercial has a full bike lane and is the major connection to south Salem, we expected significant numbers of cyclists. What was saw, though, was a completely dysfunctional intersection: A major barrier to biking. 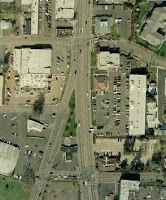 As you might be able to see on the satellite image, going north is, if not exactly pleasant, at least relatively straight-forward. On Commercial the right-hand bike lane going north is continuous; on Liberty there is no bike lane, but the consecutive right- and left-hand turns to get into Commercial going north are standard movements at busy intersections.

Going south, on the other hand, is a total "cluster." It requires, in fact, a cluster of non-standard movements: Cyclists can choose between a dangerous merge, riding on the sidewalk, or a combination of non-intuitive and inadequately signed turns.

Over 80% of cyclists proceeding south on Commercial SE choose to merge across two lanes of auto traffic turning right onto Liberty S. 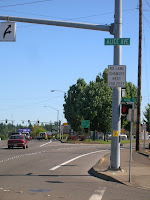 The intuitive and natural movement is to continue south on Commercial. Most bicyclists do this. Just after this sign "No lane changes next 200 feet," bicyclists pause to merge. 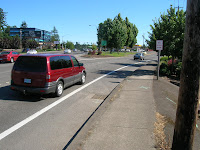 They must cross two lanes of busy right-turning traffic. 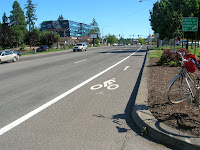 Though the "bike lane" has the official pavement marking, the prohibition on lane changes makes this a bike lane illegal to reach. Not to mention that it is a dangerous merge to perform.

The natural movement is difficult and inconsistently messaged, with one sign prohibiting, the other pavement marking inviting. 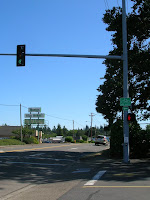 Only one cyclist followed the signed movements. The signs are old - small and out-of-date. It's possible many cyclists don't notice them. Right on Liberty S, left on Vista SE and... 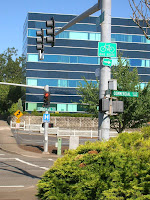 Since this movement is indirect and non-intuitive, it's not surprising that few follow it. The person who followed the signed movement complained that Vista lacked bike lane on the segment between Liberty S and Commercial SE. 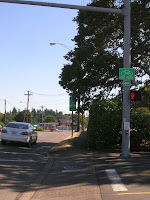 Over 90% of cyclists proceeding south on Liberty S choose to ride on the sidewalk.

About 10% of cyclists rode illegally, against traffic in the bike lane.

About 30% of all cyclists used the sidewalk for some or all of their movement through this complicated intersection.

The junction is bad because it is confusing and unclear. The vast majority of cyclists make the intuitive move to continue on Commercial SE. They miss or ignore the signed bike movement and choose a dangerous and illegal merge whose prohibition is signed. But with the bike lane marking the messaging is incoherent.

This gap is a major barrier and will need to be fixed in order to connection to south and southeast Salem.
Posted by Salem Breakfast on Bikes at 9:20 PM

Thanks for picking this intersection as one for the bike count! You are absolutely correct and your explanation is wonderful. I know in my office it has been a barrier for at least 1 or 2 people from commuting to work by bike.