After the Green + Solar Tour yesterday, some of us wanted to stop in at the new Broadway Commons Building.

CB|Two Architects had designed Waterplace and at the tour mentioned their participation in the Broadway Commons project - so naturally we wanted to check it out. 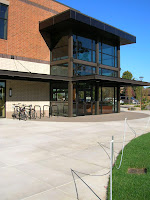 As we approached on Broadway from the south, we were naturally wondering how the bike parking would be.

It turned out to be a first-rate installation! As we neared the corner of Gaines and Broadway, its location was obvious. A patio complex with a graceful curving lawn and a fountain, led our eyes to the southeast corner entryway. And there under a heavy awning were five staple racks.

That should be the standard everywhere! Covered, in a visible and secure area, easily found. Nicely done! 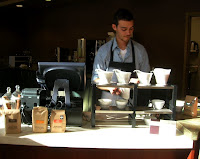 And then it got even better.

Inside we found the Broadway Coffeehouse.

And not only were they serving Stumptown, but they were offering some single origin coffees! So we had a cup of Ethopian Mordecofe and Guatemala Finca el Injerto.

The barista knew his stuff and talked helpfully about the differences between the two coffees.

Salem's Latte has been serving Stumptown for quite a while, of course - they were first! - and Clockworks joined them. But this is the first made-to-order service, I think, for the single-origin coffees in Salem.

This end to the afternoon had some real wow-factor. The southern exposure for the commons portion of the building will make for terrific natural light, especially during winter. The building greets the side street and corner, rather than just the parking lot, and some careful thought's been given to place-making.

It's a lovely addition to Salem. This part of town is hopping!
Posted by Salem Breakfast on Bikes at 10:15 AM

Oooh! You beat me to it! Love me some Stumptown in Salem.

The trend triad is complete with the third!

Have you thought about a mini-feature on the single origin coffees? - why they are interesting and how the "pour over" bar creates opportunities for comparative tasting with friends!

Well perhaps I should. I've been off the coffee for a while though. Sad.