On a beautiful Wednesday afternoon about 25 traffic safety experts and advocates took a bike tour of Salem, looking at successes and challenges.

Monday through Thursday the 2010 Oregon Transportation Safety Conference took place at the Conference Center. One of the breakout sessions was a bike tour.

Julie Warncke and Kevin Hottmann of the City of Salem led the group, and folks couldn't have been happier with the weather.

The tour focused on the downtown core. The Union St. Railroad Bridge was a source of both great success and great challenge. We also looked at the new sharrows on Commercial and Chemeketa, and turned then to the Railroad quiet zone and connectivity across the rail line. 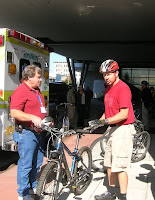 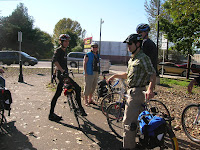 After going through Riverfront Park (see the top panorama), we crossed the Center Street Bridge and stopped at the Rail right-of-way terminus at Wallace Road. We talked about the challenges of getting people across Wallace and the non-intuitive signing the dead-end required. (Shane Rhodes of Kidical Mass and Eugene Safe Routes in plaid!) 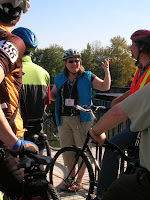 After looping around on Wallace and Glen Creek we stopped on the Union St.RR Bridge itself, and Julie talked about how loved it is. 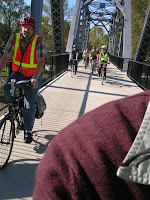 Everybody loves it! It was without a doubt the most popular part - and later a smaller group took a walking tour of it. 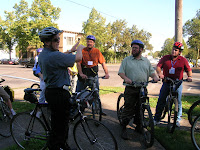 Then we crossed front and stopped at Commercial and Union. Here Kevin talks about the difficulties in getting people across. Greg Raisman (with beard) from the City of Portland had helpful suggestions.

We biked down Commercial, using the new sharrows in the outer lanes. After we turned on Chemeketa, we found the Wednesday market still in session, so we had to dismount to go through it. Then we took off again and stopped at the Capitol Mall to discuss the bathrooms, and continued on to the 12th street promenade, where we stopped a couple of times to talk about the railroad crossings.

Then the group came back. It was a great discussion of the strengths and weaknesses of recent downtown projects, and the varied backgrounds of the participants made for interesting conversation about people walking, bicycling, and driving, as well as about different sized cities and the challenges distinct to each.
Posted by Salem Breakfast on Bikes at 4:15 PM