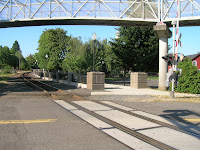 Earlier this year the City of Salem applied for a Oregon Bicycle and Pedestrian Grant for improvements at 12th and Mill. Applications were especially competitive and unfortunately Salem's didn't make the cut.

One part of the project was to put a pedestrian median on Mill and 17th, much like the one on Chemeketa and 17th. The larger part is a cluster of improvements at 12th and Mill.

(Here's a picture looking north, showing Mill St, the RR crossing, the private skybridge, and the south end of the promenade in gravel. For more on the project see City Council notes from June 28th.)

The Oregon Bicycle and Pedestrian Advisory Committee has approved just over $5.3 million to Oregon cities and counties for pedestrian and bicyclist improvements. This year, the committee received a record 90 applications and approved 11 for funding. Committee members rated the projects on several criteria including design elements that enhance the bicycling or walking experience; land uses served; current conditions; potential usage; and safety impacts. 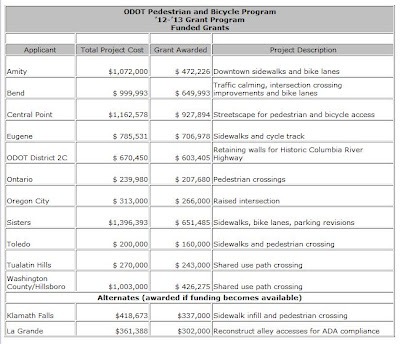 The project was part of the "quiet zone" projects at multiple rail crossings in the downtown core, and at this time it is unknown how the project will be funded.
Posted by Salem Breakfast on Bikes at 7:00 AM