Holiday Bike Parade to Fill in for Festival of Lights 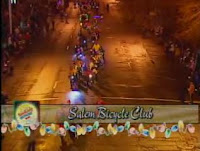 Treat yourself to an exhaust-free holiday parade!

Go Downtown Salem and the Salem Bicycle Taxi are sponsoring a Holiday Bike Ride on Saturday, December 11th, at 6:30pm. From Salem Weekly:

“We are open to people being as creative as they can be,” said [Michele Darr of the Bike Taxi]. The route starts at Salem Riverfront Park in front of the Christmas tree, and goes across the bicycle bridge to West Salem. At Roth’s IGA carolers will serenade bicyclers along the parade route. Hot chocolate and prizes will be part of the first annual event.

“We still want people to 'light up.' We hope to see lots of bicycle lights,” said Darr. “This is the first year, and we hope to make it bigger and better each year.”

The entire event is free and Salem Bicycle Taxi will be offering free pedi-sleigh rides with Santa, led by a human reindeer.

(This year's ride is not an official ride of the Salem Bicycle Club - but club members are invited!)
Posted by Salem Breakfast on Bikes at 7:00 AM

"Hot chocolate and prizes will be part of the first annual event."

First or annual, it's one or the other.

K&N, thanks for the reminder! I'll post it there mid-week next week.

I don't know if this will help, but I made the Facebook Event page.