From Hell to Heaven: Sandow Birk's Highways and Byways in Paradise

Sandow Birk's Paradiso is not showing at the Hallie Ford Museum of Art. Because Inferno implies Paradiso, it was natural, however, to wonder how Birk might have redeemed urban space in heaven.

Since Birk represented hell as a partially ruined city, I had expected him to represent heaven as a beautiful city. I feel like he set me up to expect parallelism. 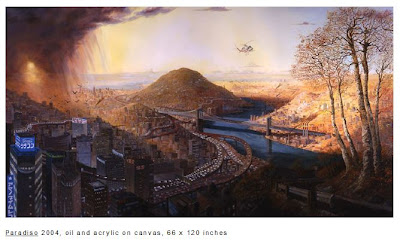 Maybe envisioning the city as utopia was going to be a vision of heaven too banal and earnest for art. Or maybe wealth and class was getting in the way.

In any case, in his poem Dante set his own divine order in a heaven of lights, constellations, and circulating geometric forms, and didn't much try to write a "city of god."

So perhaps it is unfair to suppose that Birk might want to balance the urban imagery of hell with a beautiful walk in the city. And, anyway, it's not like the seedy rock club doesn't offer its own beauty. There are a couple of scenes in Washington Square Park, but even the "ladder of perfection" turns out to be an escalator in the mall.

Heaven and hell seem insufficiently differentiated here. And if Birk's goal was to celebrate a big city Paradise, it sure seems like he could have made it more attractive. Instead, he represents something that doesn't much look like Paradise, and I can't figure out what game he's playing.

To me Birk's Paradise doesn't work.

In Canto VI of Paradiso, the last great Roman Emperor, Justinian, is a car dealer! Is Birk really saying that the car dealer is a type of Great Man?* As with the mall escalator, I can't make this work unless I read it ironically.

Here Justinian addresses Dante and Beatrice about his great compilation of laws, the Justinian code, and on desire and the divine order:

Caesar I was and am Justinian,
who, through the will of Primal Love I feel,
removed the vain and needless from the laws.
....
This little planet is adorned with spirits
whose acts were righteous, but who acted for
the honor and the fame that they would gain:
and when desires tend toward earthly ends,
then, so deflected, rays of the true love
mount toward the life above with lesser force.
But part of our delight is measuring
rewards against merit, and we see
that our rewards are neither less nor more.
This does the Living Justice make so sweet
the sentiments in us, that we are free
of any turning toward iniquity.
Differing voices join to sound sweet music;
so do the different orders in our life
render sweet harmony among these spheres.
(Paradiso, trans Mandelbaum, Canto VI, ll. 10-12, 112-126)

In Birk's hell the "differing voices" maintained a contrapuntal harmony, but here in paradise the irony and disconnect between image and text just makes a discord.

But then, hell's always been more interesting, hasn't it?

*An amusing reading of this might be the way the Governor, power companies, and ODOT are selling us on the electric vehicle. It's the way forward to the new promised land of green transportation.

In this regard, there's a powerful coalition, both formal and informal, of interests who claim that without making any other changes to our transportation habits, an all-electronic fleet will solve our problems.
Posted by Salem Breakfast on Bikes at 7:00 AM

I heard Birk discuss this while he was in town, and he talked about how a city alley could be seen as hell, or it could be seen as paradise -- he purposely made both places look the same because he felt you could see them either way. Something like that...

If one posits some equivalence of heaven and hell, doesn't that turn Dante into blancmange? The difference needs to bite, I think. So that's why I'm not loving Birk's Paradiso.

'Irony is the natural element for Birk and Sanders, and therefore they are home free in the Inferno, where their exuberant spin on Los Angeles corresponds to Dante's own bittersweet (bordering on savage) relationship to his own basin city, Florence….Purgatorio and Paradiso, however, present major problems for the ironist: so much in these canticles asks to be taken straight, to be seen as beautiful and good….

'[A]nd the divine Beatrice? Dante's "girl," chubby in a little black dress, walks these mean streets with a come-hither attitude. The Dante scholar is puzzled by these choices. Is Eden placed on the wild side of the tracks because the pastoral no longer speaks to us? Does the theological romance that Beatrice represents in the Commedia appear too idealized and highfalutin?...

'Are we more likely to entertain the notion of a golden-hearted hooker than imagine a beloved who is at one and the same time herself and Christ? Is our all too solid flesh compelling, reliable, real in ways that the spirit (or whatever) is not?

'Birk's (e-mail) response to my questions reveals what motivated him to transform Dante's earthly paradise into a red light district: "Beauty and goodness might be found in a strip bar, inspiration in a sunrise; contemplations on the nature of the soul can happen with a homeless person, and the fictional muses of Faith, Hope, and Charity might just as well be represented by the 'hotties' of today as by the 'hotties' of yesterday that we find in Romantic painting."

'The third volume of Birk's Commedia marks his radical reinvention of Dante's vision. In his Paradiso we see most clearly that he is not interested in illustrating Dante but rather in using him as a starting point for his own vision of present twenty-first century. Instead of a Beatrice who gets progressively more beautiful as the journey ascends the ladder of being, Dante's "girl" remains the strangely plump figure she was in Purgatorio, not getting any more lovely (let alone more ineffable) as she carries on: "In any American 'Divine Comedy' there have to be fat people."'