How often do you look down at your feet when you enter a downtown business or restaurant?

Probably not very often. But if you don't, you'll miss this tiled entry and other fascinating details of Salem!

You may remember Arthur Moore, City Councilor, developer, and bike dealer. He's not the only civic leader who was also into bikes. The outline of Paul Hauser's story is more than a little similar: From 1934 to 1954 Paul H. Hauser was city treasurer, but before that he was a bike racer and bike dealer.

SALEM (Special) - Paul H. Hauser, 85, city treasurer of Salem for 20 years until his retirement in 1954, died in a nursing home here late Sunday.

A resident of Salem since his sixth year, Mr. Hauser was born in Fond du Lac, Wisc., May 12, 1879. After graduation from the old East Salem school, Mr. Hauser worked at the machinist trade and then entered the bicycle business. For many years, until the late 1920s he was associated with his brother Lloyd Hauser, in the sporting goods business, operating stores in Salem, Eugene, Albany and Corvallis in one of the first retail operations of the chain type.

Mr. Hauser served as deputy collector for the Internal Revenue Service in the Salem district for several years. In 1934 he was elected city treasurer and held the post until his retirement in 1954...

His first business venture was in partnership with Watt Shipp. Here's an ad from 1901. 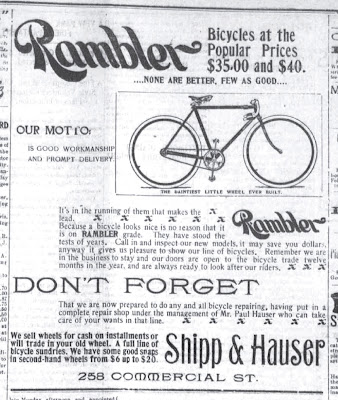 By 1905 he was in business with his brother. 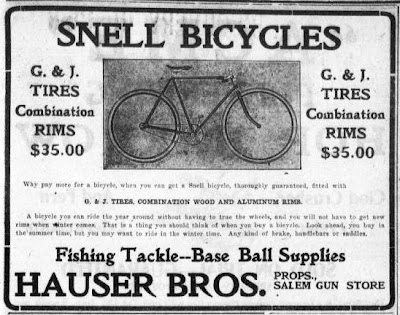 Here he is in 1954 at his retirement, accepting a gift of luggage from Mayor Al Loucks, whose name is commemorated on the Library's auditorium. 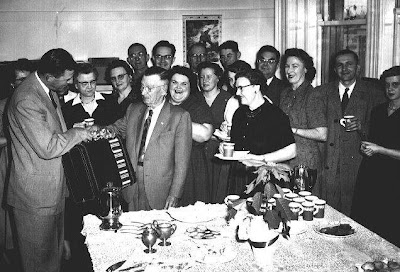 So look down, look up, look all around! It's life at the speed of bike! 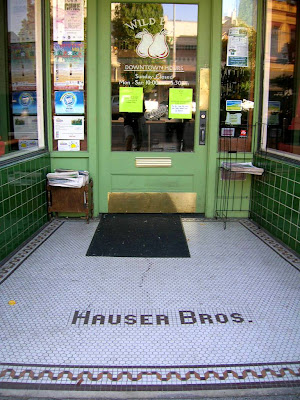 Obituary from the Oregonian.
Posted by Salem Breakfast on Bikes at 7:00 AM

I now own Paul H. Hauser's house. It's at 925 Saginaw St and, fittingly, is right on the bike route to Minto-Brown. He had it built in 1914 so he must have been doing pretty well by then.

How nice to hear! That's great you're able to make that historical connection - and doubly so to learn about the proximity to the Saginaw and Minto bike routes!