Rail: Canyons and the Costs of Sort and Separate

Veterans Day recalled to mind a summer evening earlier this year. I was downtown going to the grocery store and a train carrying 50 or more Stryker armored vehicles passed by. It was really impressive to see car after car of armored might, and it was more than a little intimidating, actually, an unexpected reminder of war.

In his Memoirs, writing about the Civil War, General Sherman said,


The value of railways is also fully recognized in war quite as much as, if not more so than, in peace. The Atlanta campaign would simply have been impossible without the use of the railroads...

Here, most of us probably don't think anymore about the importance of rail for military logistics.

But it was also a reminder that a transportation system that used rails for longer-haul passenger and freight cargo also can separate people in ways from trivial to profound.

Bike and Walk Salem and the Railways

In advance of the November 1st Planning Commission Hearing, the draft plan elicited a boilerplate missive from the Senior Attorney in Omaha for the Union Pacific Railroad:


Any development near operating right of way can negatively impact freight rail service and create unintended consequences that are in neither the railroad's nor the public's best interests, including land use conflicts due to the nature of rail operations that may cause mechanical odor, noise, and vibration. New development will attract more cars and pedestrians to the areas around UP lines, and people may trespass onto the railroad right of way as well.

In addition to the other safety concerns of which UP remains vigilantly aware, these factors also have the result that trains may be forced to proceed more slowly, and/or to make more frequent emergency stops, which makes rail service less effective and efficient. In the event of train slow-downs or stoppages, train cars may be forced to block at-grade roadway intersections, causing traffic disruptions. In addition because of vehicular and pedestrian traffic issues, UP believes that no new at-grade crossings should be allowed.

UP requests that the City analyze and seek to mitigate the impacts the Project will have on the UP lines and rail service by requiring appropriate mitigation measures. Mitigation measures that should be included in the Project, for example, are sound walls, setbacks, fences and other barriers, public education and disclosure.

As the letter clearly shows, our approaches to railroad safety, as our approach to automobile safety, is to sort and separate: Keep different kinds of road users away from each other. At-grade crossings permit too much mixture and the chance of fatal crash and delay. Unfortunately, the legacy of 19the century law - much like waterway law, the Minto bridge, and the Willamette Queen - combined with auto and highway subsidies permit the railways to shift the burden and costs for safe crossing to the City.* UP's not gonna build us pedestrian overpasses in order to speed their trains.

We need Trains to Carry People and Freight

Coincidentally, train advocates have been in the news lately.

Yesterday Walker observed over at LoveSalem,


We need to forget the high-speed rail fantasy, which is nothing more than a slight variation of the highway boondoggle ... a transit system designed in utter disregard of our economic and environmental limits. What Salem needs more than anything else in 2012 is a rail system as good as we had in 1912. We'd think we died and went to heaven if we could have that.

And a couple of weeks ago the Statesman ran an editorial about improving rail service.

And there was a more recent opinion piece. We desperately need better rail service. There should be no ambiguity or uncertainty about this.

But as we think about rail as important transportation corridors, we should also remember the way they divide, and have become canyons that separate as much as corridors that facilitate.

Trains are long, heavy, and powerful. Stopping distance is measured in parts of one or more miles, not in feet. Safety and transportation planning must account for this.

Because of stopping distance and the near certainty of fatality, safety talk tends towards the absolute. Here's discussion in the news a month or so ago.

Local measures, such as the barrier and promenade along 12th Street in Salem have prevented train-related fatalities, said Bob Melbo, state rail planner with the Oregon Department of Transportation.

The weekend's fatal incidents must remind residents of the dangers on railroads, officials said.

"If you're going to cross a railroad track, do it at a legal crossing and remember to be alert around railroad tracks," Howells said.

The debate around closing the entry to the Carousel at State street showed this all too well.

And here's an example of a fenced canyon. It's between two schools and is a clear instance of a place where we don't want kids errantly crossing the tracks and putting themselves in danger. But if you want to cross the tracks, the distance between legal crossings is half a mile. There's an underpass, but it is narrow and on a deadend street, and it has to be locked after hours. That can result in a lot of out-of-direction travel in order to cross the tracks "legally." 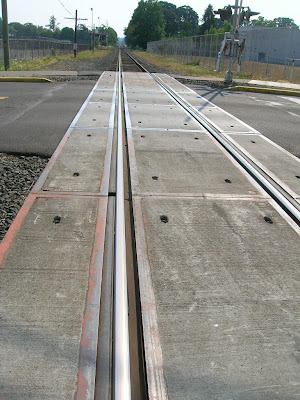 A century ago, we had a lot more mixing. Here's a still from the 1906 film of Market Street in San Francisco. The rail here is cable car, proceeding much more slowly and less powerfully than a freight train. To be clear, this is not an apples-to-apples comparison, not even close. But it's still a multi-modal vision that ought to guide us more than the canyons of sort-and-separate. 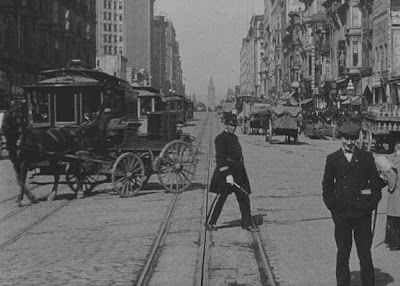 We should be thinking of ways to make rail less of a desolate canyon that cuts up neighborhoods and cities. Connections across rail lines are vital, and, as with the promenade between Mill and Marion streets, connections along rail are also very useful.

Rail is going to be more and more important again, and along side places where sort and separate is indisputably necessary, we need also to develop strategies of coexistence and funding mechanisms that fairly distribute the burden.

So take this opportunity, if you haven't already, to let the City know that facilities for people who bike are important! The comment form will be up through January 3rd - but it will be helpful to demonstrate lots of support before the Planning Commission worksession the first week of December!

* This is much too complicated to discuss on a bike blog. But if car-driving and gas were no longer subsidized to the extent that they are, surely it would be easier for the railways and local governments to cooperate on more equitable ways to fund above- and below-grade crossings. Maybe rail fans can chime in with more sophisticated commentary?

Here's a tweet about a derailment right in front of the Carousel!

Thanks Eric! Your observations are right on and cut to the heart of why it is challenging to muster enthusiasm for the Bike and Walk plan even though it contains many worthy projects. Trying to remedy our wasteful, overbuilt infrastructure (that has been scaled for cars and not people) with more infrastructure in an attempt to make it more attractive to bikers and pedestrians won't get us very far. We need a more complete approach. Check out the Strong Towns view on the difference between a road and a street: http://www.strongtowns.org/journal/2011/9/26/tedx-the-important-difference-between-a-road-and-a-street.html

Didn't know about the Strong Towns site! Thanks for sharing that.

Getting, though, to where we look at things more as a reallocation of existing space/facilities than as the addition of more more more - well, just now what seems so far off...