At yesterday's Vision 2020 Bike/Ped Workgroup meeting, discussion focused on two drafts of a new bike map, on the Energy Grant and bike parking, and on the strategy behind Salem's grant seeking.

The drafts differing treatment of streets like Lancaster Avenue, Market Street, and the Pringle Parkway is especially revealing. Are these good bike routes? And who is the audience for the map? 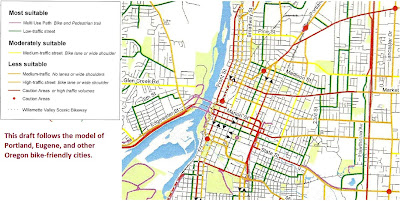 One map follows the example of Portland, Eugene, and other nearby bike-friendly cities. It labels routes in terms of suitability, and this means that some very busy streets with bike lanes get dinged because they are not comfortable or present lots of turning conflicts. 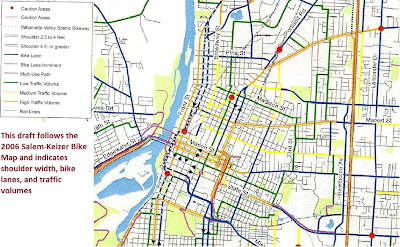 Another example follows the existing bike map from 2006 and focuses on bike lanes and shoulder widths.

Sentiment seemed mostly in favor of the upper map - but it was not unanimous. Do you have a preference? If so, why?

Soon drafts will be posted to the SKATS website and additional comment solicited. Cherriots Rideshare is funding design and printing. So it seems realistic to expect a final printed version to be distributed in the Spring of 2012.

The bike parking funded by $85,000 in ARRA funding as part of an energy grant will go back out to bid. This will permit the City to refine the kind of bike parking, which was speced in dummy fashion early in the process; parties were later surprised to learn that this committed the City using the dummy specs. Further changes meant the City has to rebid the project, and this ensures that the dummy specs will no longer be used, and higher quality racks and lockers will be used.

Finally, group members asked for more discussion over City grant applications, especially with a view to the 2012 Transportation Enhancement program set for May of 2012. Hopefully early conversation will give the City time to respond to comments in creative and improving ways, and will ensure that there is stronger community support - perhaps even passion! - behind the next group of projects. So much of the Minto Path kerfluffle could have been avoided by introducing the proposal earlier in the application process for comment along with additional rounds of refinement.
Posted by Salem Breakfast on Bikes at 7:00 AM

Eric,
The maps are now available at:
http://www.mwvcog.org:8080/2/document-folder/data-and-reports/maps